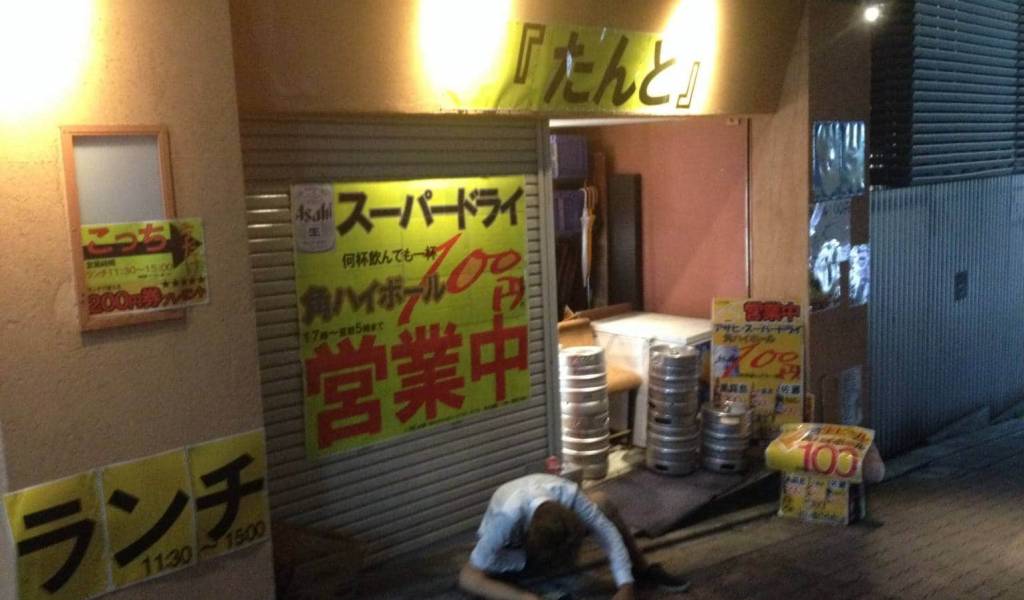 July 17th, 2015 | Greg Lane
Sharing
At the time we visited Tanto, there was no seating charge. However, it’s been brought to our attention that they now have a per person charge. If you’re worried about the cost, confirm the charge with the staff before entering.

Tanto delivers on that mythical promise — 100 yen beer in Tokyo. Well technically it’s 108yen, but since the consumption tax rise most stores have gone back to their old habits of forgetting consumption tax exists until it comes to calculating your bill.

Tucked in behind Tokyu Plaza, not a 5 minute stumble from Shibuya Station, this hole-in-the-wall izakaya looks like the most downmarket pop-up shop you’ve ever seen (there is also a second Shibuya store and a branch in Shinjuku). Their commitment to cutting costs so they can supply you with 108 yen jockeys of Asahi Super Dry extends to not wasting money on exterior signage (apart from a quick trip to Kinko’s) and not even painting over the name of the previous business just inside the entrance.

So what’s the catch? Have you not been paying attention? The catch is, this place is obsessive about saving money. Seating about 30 people, the decor could best be described as soviet. Basic chairs and tables with spotlights above, with little cardboard cutouts dangling below them to diffuse the light.

Surprisingly, there is also no service charge—a common trick of izakaya with cheap beer. The selection of food is enormous for a store this size—and reasonably priced. The rule is, you have to have at least one plate of food for each person. With dishes starting at 200 yen it’s not too much of a burden. Some examples are ramen for 300 to 600 yen, spaghetti carbonara for 700 yen, french fries, karaage and age-gyoza for 500 yen each, a huge beef hamburg (salisbury steak) for 800 yen and negitorodon for 1,000 yen. Given the obsession with cutting corners we’d recommend being a bit careful what you order—this may not be the best place to satisfy that sashimi craving.

Overall, the place is a dive but ideal for a few beers and food with some friends on a budget of about 2,000 yen each.