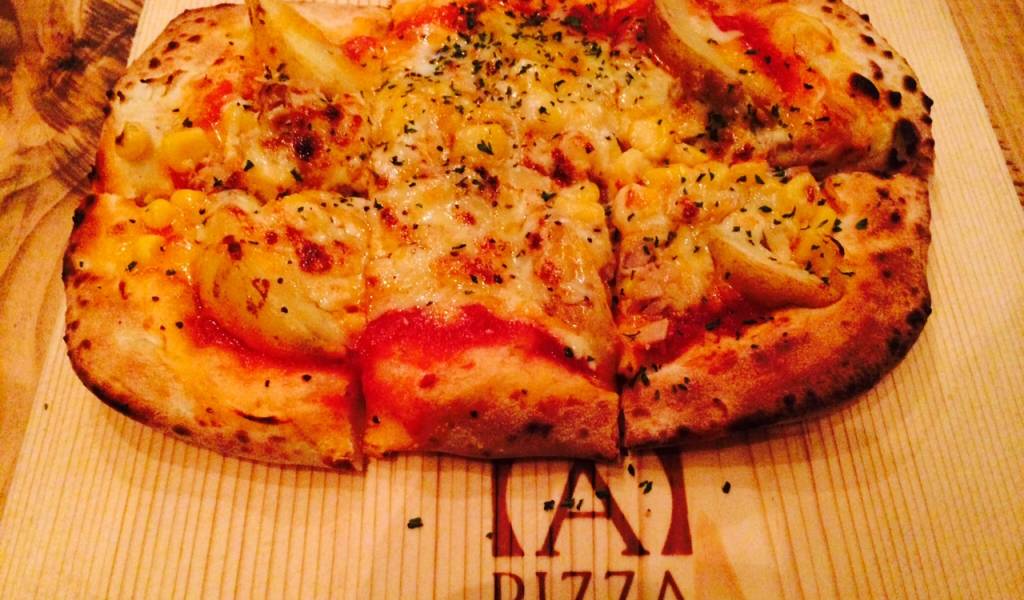 Cheap Pizza in Ikebukuro: A Pizza

Another contender in Tokyo’s slew of 500 yen-or-under pizza joints, A Pizza is a good spot for a light lunch or dinner if you’re roaming around Ikebukuro.

There’s so much cheap pizza in Tokyo that one could justify dubbing the city “Little Italy on a budget”. A squizz at our archives reveals enough one-coin pizzerias to last you your entire trip, or possibly lifetime. Joining the ranks of Sempre and Cona is A Pizza – a small store that started out in 2012, opening a second branch in summer last year.

Two things set A Pizza apart from its cheapo rivals – first, it’s possible to get a fresh pizza for under 300 yen (their Marinara and Simple pizzas are 291 yen each, tax included). Secondly, their pizzas are rectangular – apparently for ease of eating (and they are pretty easy to eat, but surely the same could be said of any pizza). Their pizza is also punted as (mini) New York rather than Neapolitan style.

You choose how you want your parallelogram sliced – halves, quarters, sixths or bite-sized eighths. It’s novel and nice for sharing, but the pizzas themselves are rather small – perfect for a snack or light meal, though if you’re really hungry you’ll need at least one and a half to fill you up.

There’s a jump in price from the super cheapo Marinara and “Simple” pizzas mentioned above to a Margherita, which will set you back 410 yen. If you can afford an extra 54 yen, go for the Anchovy, Olive and Basil pizza – it’s good and cheesy, and a nice break from the tomato-based stuff.

The most expensive option is a fancy Prosciutto and Rocket affair at 626 yen, followed by the Pescatore, Salmon and Onion and Quattro Formaggio pizzas, all of which cost 594 yen. The rest hover around the 500 yen mark. You can add a salad (with ten types of veggies) and soft drink set for an extra 216 yen, or have a glass of beer or wine with your leaves for 540 yen. There’s a bunch of side dishes too, including mussels in wine, Spanish omelettes and ginger spare ribs, most of which are priced at around 500 yen.

There’s an authentic pizza oven at the main store in Minami-Ikebukuro, while the sister store (right next to Rikkyo University – students and louder-than-ambient noise to be expected) seems to use toaster ovens (the pizzas do taste just as good though). It’s supposed to take just 90 seconds to fire up your pizza (according to the website), and I’ve always gotten my pizzas pronto, but our hungry photographer had to wait 30 minutes for hers. Our advice if you’re in a hurry – get there before or after the noon student/salarymen lunch rush. Getting your pizza to go is also an option.

Overall, our thoughts on A Pizza is that it’s tasty and wallet-friendly, if a little on the, well, little side. It may not be the top-ranked among the budget pizzerias, but it’s definitely worth keeping in mind if you happen to find yourself peckish in Ikebukuro.