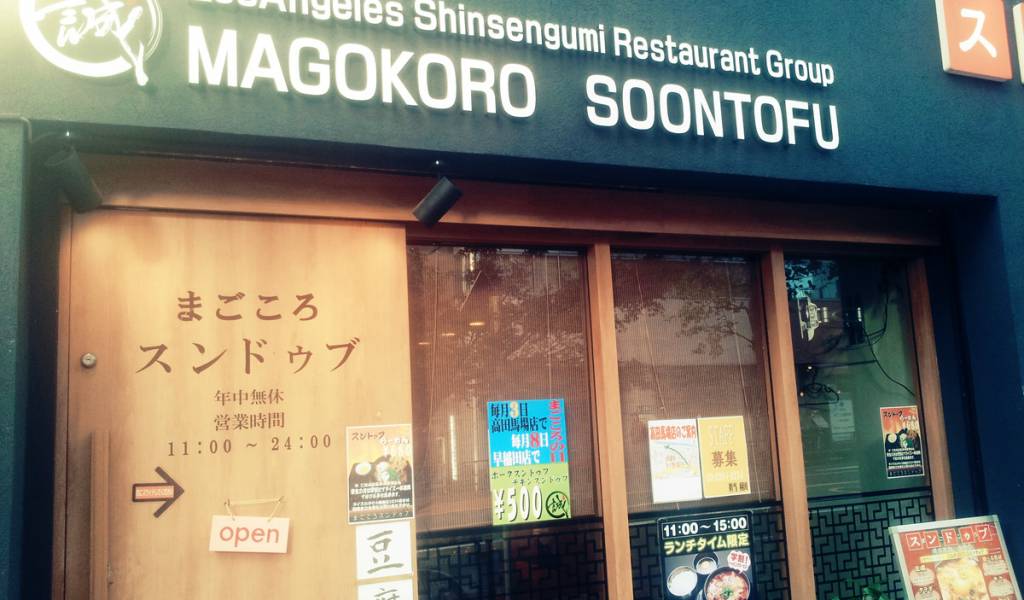 I was going to simply say, Korean Sundobu (silken tofu hotpot) served sizzling in a cast iron pot for 500yen with additional student discount and leave it at that. However there’s a few factoids about Magokoro Sundobu that merit at least a paragraph or two of your precious cheapo reading time.

As a seasoned cheapo the vending machine ordering system that operates in Magokoro Sundobu will come as no surprise. In addition to your basic Sundobu, you tack numerous extras onto your order including but not limited to beef, prawns, chicken, pork, oysters and butter.

When you sit down and hand over your meal ticket to the server he/she’ll ask you two simple questions, 1) “How hot?”, 2) “How garlicky”.

If you’re a first timer, I’d recommend asking for “Fuutsuu” (normal) on both counts. “Normal” is still quite spicy and is only #1 on a scale of 0 – 10. As for upping the garlic factor that’s between you and whoever you happen to be meeting in the afternoon.

Although Magokoro Sundobu is part of a Japanese owned family of restaurants (Shinsengumi), the (Japanese) founder took off to the US in 1988 to study English, opening his first restaurant, a yakitori joint in LA 1992. His success story continued and he opened several more Japanese eateries in LA. Twelve years later in 2004, the owner finally opened up shop in Japan aswell, but with a Korean restaurant Magokoro in Kanda.

And ironically Sundobu itself, also has it’s own hobo history, being invented by Korean immigrants in LA in the ’90s. It’s a spicy hotpot, made with sliken tofu, garlic powder and served violently sizzling in a thick ceramic (or Iron as in Magokoro Sundobu’s case) dish with a raw egg for you to dump on top.

So we have a Japanese immigrant Chef in the US bringing a dish invented by Korean immigrants back to Japan.

And you wouldn’t be a proper cheapo if you hadn’t read this far looking for more details about the student discount. Students (with ID to prove it) can get one extra topping free – see those with the red 学 symbol below: