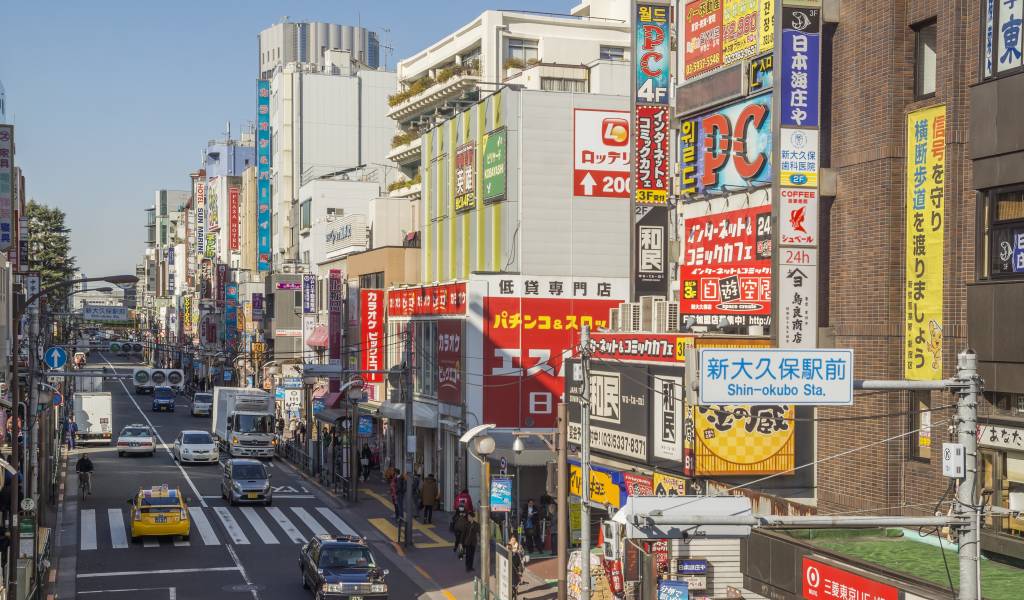 Just five minutes from tourist mecca Shinjuku, Shin-Okubo (Tokyo’s Koreatown) has a vibe unlike anywhere else in Tokyo.

Want to experience a totally different side of Tokyo’s nightlife? Look no further than Shin-Okubo. While it’s just a stone’s throw from Shinjuku’s (in)famous Kabukicho district, it might as well be a thousand miles culturally from the rest of Tokyo.

Once an affordable neighborhood, the area became popular with Korean students and laborers in the ’80s, and has been slowly shaped to cater to Korean tastes. These days Shin-Okubo can feel more like party central than a modest residential zone.

That is to say Shin-Okubo has a lot to offer if you’re looking to spice up your diet. With heavier Western influences and bolder flavors, Korean food is a far cry from Japanese food. Head right out of the station and you’ll find the road ahead of you crammed with restaurants cooking up an absolute hit-parade of Korea’s most popular dishes.

Chickin (chicken) and maekju (beer). A combination so stellar they made it into a single beautiful word: chimaek. For the last decade or so, ultra-crispy cuts of fried chicken have been putting Korea on the culinary map—and for good reason. With literal mounds of chicken, bustling casual settings and cheap drinks, it can be a super satisfying (and affordable) night out when split among a group of friends. Expect to see every part of the chicken making an appearance—there’s more to it than breast, wing and leg!

The star of the show is yangnyeom chicken—fried chicken smothered in a sweet and spicy gochujaang (fermented chili paste) based sauce. It’s no exaggeration to say I wake up some nights from intense chicken-deprived fever dreams if I go too long without it. The benchmark for spicy is a lot lower here, so in general you can expect a less fiery taste than you’d get in Korea. If you really can’t handle the heat, most restaurants also offer either a plain or garlic and soy glazed option.

There are several variations but the dak-galbi you’ll see most often here consists of a large pan of meat on a hotplate, with a pile of shredded cheese in the middle. It’s a simple process—once the cheese has melted (your server will probably let you know when), you dip the ingredients, usually chicken, pork or veggies into the cheese fondue-style before eating. With a fairly mild chili flavor and a river of melted cheese to cool the palate, dak-galbi appeals to Japanese tastes, and has become a popular Korean-restaurant staple in Tokyo.

Often touted as the inspiration for yakinuku (Japanese-style barbecue), in a Korean barbeque, you’ll order raw meat and vegetables to cook on a hot grill at your table. One difference is that you’ll often need to cut the cooked strips of meat into bite-size pieces yourself using scissors—apparently a common feature at many Korean tables. You’ll also often be given a basket of lettuce for wrapping. The most common way to eat it is to place some meat, veggies and sauce in there, and wrap it into a little parcel.

There’s also a good chance you’ll be presented with several banchan (small side dishes), usually including kimchi and veggies before your main meal. Don’t send them back—they’re to be enjoyed alongside your meal, and don’t cost any extra!

Naturally, the area has some great options—the narrow streets shooting off from 1-chome, such as 1-16 are a great place to start.

These stuffed pancakes are both filling and cheap—one will set you back between ¥200 and ¥300. They can be either savory or sweet. My favorites are the traditional ones, filled with cinnamon, sugar or honey and maybe a few nuts and seeds. They’re usually finished off right in front of you once you’ve placed your order, so they’re as hot as actual molten rocks. Be careful unless you want to end up like that guy from Raiders of the Lost Ark whose face straight up melted.

Where to eat: Restaurant recommendations

Shin-Chan is the place to find that much-loved Korean fried chicken. This little spot is full of Korean exchange students craving food from their home country, making it a great place to mingle with the area locals (also, a decent indicator of authentic taste and quality).

Shin-Chan’s picture menu is very helpful when ordering, on which are lots of small-dish options as sharing is the name of the game here.

When you see the blue lights at the front of the building, you’ve hit the right restaurant.

This fancy little place has been featured on TV and raves great reviews. Pungumu offers different meat options on different days, from seasoned grilled pork from just ¥500 on Mondays and Tuesdays to spare ribs and a pork roast from ¥500 on Thursdays. They offer other traditional Korean courses too, with an all-you-can-eat lunch buffet featuring 30 menu items for just ¥1,000. A take-out option is also available if you don’t fancy eating inside the restaurant.

You can also reserve a private room where you can dine and partake in a little (or a lot of) karaoke. Up to six people can go in one private room for one hour for just ¥1,000.

Enjoy your meal? Consider picking up the ingredients to rustle up your own Korean feast back home. Shin-Ōkubo contains some of the best Korean supermarkets around. As with any imports, the prices are a little inflated, but odds are the products will be considerably cheaper, better and more varied than they are at your local grocery spot.

Seoul Ichiba is a small Korean market shop in the Shin-Okubo area. It is most definitely kimchi central here! This is the place to go for that well-loved fermented cabbage with many samples on offer to try.

The market itself is small, so expect tight squeezes when walking around. Go to this joint if you want to taste some of the best Korean food in Japan—and if you don’t mind being part of a big crowd.

South Korea has emerged as an absolute powerhouse when it comes to cosmetics—especially skincare. But with products for your hair, your feet and everything in between, there’s very little you won’t find along the main drag of Shin-Okubo.

If you’ve been in Japan for any period of time you’ve probably encountered those creepy cosmetic face masks. Seemingly a Korean invention, the masks are wildly popular throughout large areas of East Asia and Southeast Asia. With a wide range of designs and alleged effects, they’re big business, and Korean imports are a sought-after product. If you’re an avid fan or you’re excited to try them with friends, you’ll find them here in bulk for a steal.

I’m no expert, but word is skin holic and Skin Garden (in addition to sounding like B-horror movies) carry a broad range of products at bargain prices.

While the term K-pop covers a broad range of musical styles, boy bands are dominating the scene right now. These handsome Korean teens have been singing, dancing and charming their way onto the charts and into the hearts of fans worldwide. If you’ve somehow missed the craze so far, you’ll find it hard to ignore in Shin-Okubo. It’s an integral part of the experience, playing in the background of many restaurants and blaring into the streets from dedicated K-pop merch retailers.

New to watching baby-faced, energetic Korean guys do their thang? BTS ARMY for life? Either way, the K-pop stores are worth a glance if only to marvel at the sheer quantity of products.

Who knows? You might just come out with a new hobby.

Okubo
Written by: Felix Wilson
Filed under: International Food
Tags:
Sharing
Questions or comments about this article?
Start a thread on our community forum
Ask our local experts about Tokyo