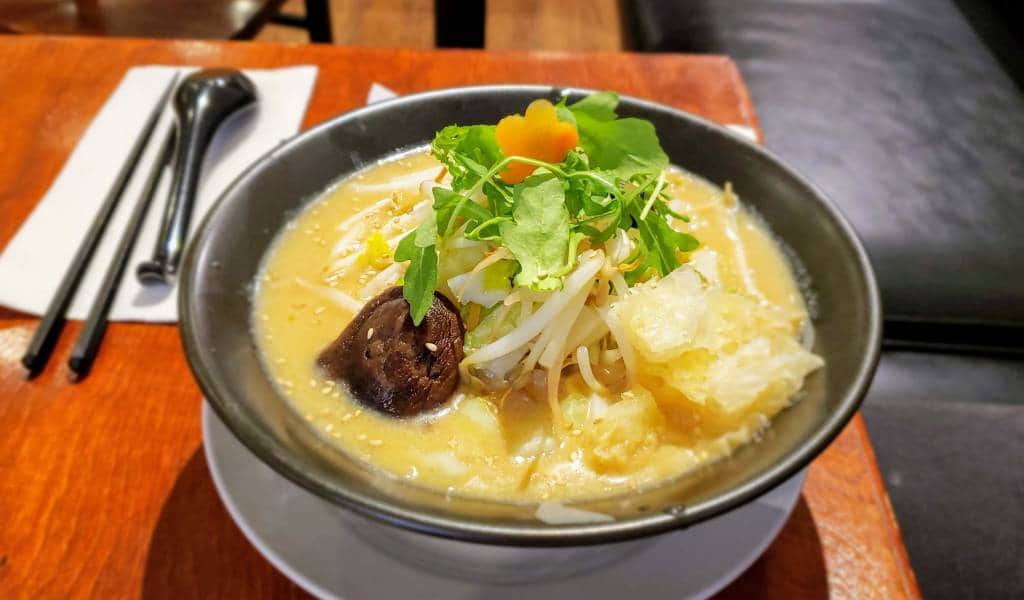 A ramen shop in Toronto, Canada received international acclaim back in fall 2018 when it was invited to open up shop in the world-famous Shin-Yokohama Raumen Museum. Ryus Noodle Bar is only the second non-Japan-based restaurant to stand among the museum’s gold-star line-up of eateries.

What does it take for a restaurant to hold such a coveted spot among ramen royalty? We visited owner Chef Ryuichiro Takahashi, who hails from Chiba Prefecture, at his Toronto flagship shop to find out.

The answer, like any good dish, is not overly complicated. Ryu’s global success lies in a passion for good cooking, high-quality ingredients, a welcoming ambiance—and of course a pinch of luck.

Chef Takahashi, with 20+ years experience in the food industry under his belt, was successfully running Ryus Noodle Bar smack-dab in downtown Toronto. The spot quickly became a favorite of ramen fiends across the city. It was also there that judges from Japan’s famous ramen museum tried his delectable chicken shio ramen and were convinced of his claim to a coveted stall at the museum.

Alas, the path to success is not always a linear one; in the summer of 2017, a five-alarm fire broke out at Ryus Noodle Bar, rendering it inoperative. It was a devastating blow that put the ramen museum deal in jeopardy.

But with that pinch of luck and a work ethic beyond measure, Chef Takahashi was more motivated than ever to achieve the dream of serving up his Canada-famous bowls in Japan. He reopened Ryus Noodle Bar only a few weeks later in Toronto’s east end, a project that was already in the works, where fans for his ramen have faithfully flocked to ever since. A second taste from judges at this location secured his spot in Yokohama.

A taste of Canadiana

During our visit with Chef Takahashi, we asked him how he has built such a loyal customer base and why his dishes have resonated so well with Canadians. He tells us he hopes that Japanese customers will say of his dishes “Oh, this is real ramen” and Canadians who are unfamiliar will say “This is tasty”—so his focus is to find the balance between both cultural palates.

His most popular menu item is the chicken shio ramen. Ontario has high-quality chicken, according to the chef-owner, which makes for a good, creamy broth. While creating the featured dish for the museum, he tried and tested many types of chicken in Japan to make sure his bowls taste the same in both countries.

He also wanted to add a Canadian flair to pay homage to the noodle bar’s roots. First, he tried maple syrup, but it was just too sugary. He then experimented with salmon, which didn’t work very well in the soup format and is already widely eaten by Japanese people. Finally, he landed on the magic ingredient: maple butter. It offers a truly Canadian taste, plus it already exists conceptually as a ramen topping—see salty butter on Hokkaido miso ramen.

Digging in: A visit to Ryus Noodle Bar in Yokohama

We were lucky enough to pay a visit to Ryu’s Yokohama shop to try his ramen ourselves. Nestled in the Showa-themed streets of the prestigious Shin-Yokohama Raumen Museum, Ryu offers his own distinct take on ramen—developed to suit Canadian palates as well as Japanese.

The shop itself is a decidedly clean and orderly contrast to much of the Raumen Museum’s wonderfully campy aesthetic and bustling atmosphere. The service style is as Japanese as it gets—you pay at the machine, attentive staff bring you your order, you enjoy your noodles and you make way for the next customer. It’s not the kind of space you’d sit idly for a chat with friends (though with so much to absorb in the rest of the museum, there’s little chance you’d want to).

The flagship broth is a tori paitan—a chicken-bone-and-vegetable-based soup with a milky complexion, deep savory taste and full, silky texture. I’ve heard it compared to popular flavor-bomb tonkotsu (a style of broth made using mostly pork bones). In this case, while it shares a similar, collagen-rich mouthfeel, there’s a cleaner, more refined flavor at work, without the overwhelming fattiness that puts many people off tonkotsu.

As standard, each bowl comes topped with a generous serving of green onions, beansprouts, bamboo shoots, sesame, chashu pork and a couple of slices of chicken that will practically melt in your mouth. Additional toppings include a soft egg, sweet corn, and extra pork or chicken.

I shelled out an extra ¥100 for Ryu’s signature smoked maple butter, which adds a subtle sweetness to the dish. Just in case the nod to Canada is lost on customers, they also press it into a cute little maple-leaf shape. Alternatively, you can get a side of truffle oil an extra ¥150. It’s a pretty pungent addition, but if you’re a fan of truffle oil, the broth is robust enough to pull it off without being overpowered—and it’s not something you’re likely to see on the menu in other ramen shops any time soon.

Vegetarians can rejoice too—they also offer a veggie broth, as well as gluten-free noodles (though I wouldn’t assume the broth is totally celiac safe).

Special thanks to Felix Wilson for contributing his restaurant review to this article.

Chef Takahashi visited the Shin-Yokohama Raumen Museum as a university student (around the time it first opened) and has carried good memories about the place as a customer. Ecstatically, He finds himself there twenty years later cooking up the next generation of great ramen.

His achievements don’t end there. Since that monumental milestone, Chef Takahashi opened a second Toronto location at 669 Queen West. He was also invited this past fall to be the first Canadian pop-up at NYC’s Ramen Lab, an experimental noodle bar.

Whatever he sets his eyes on next, we know it’ll be great, and we’ll be there.