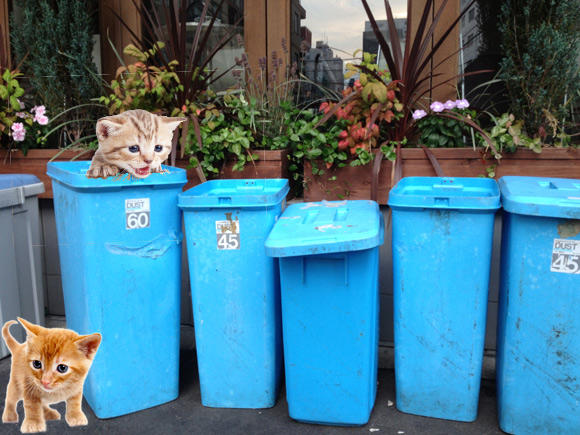 Dumpster Diving in Tokyo - Forget Cheap, How About FREE?

Doing things on the cheap (as we like to be promoting here at Tokyo Cheapo, in case you missed it) is nice and all, but getting to do and have things for free is even better. As most people may agree with this, it’s not always easy or common to receive free stuff in Tokyo, save for the handfuls of tissue paper packets with advertisements for “girl bars” that get thrust into your hands in the crowded city streets. Hanging around at the department store supermarket might get you a couple of small food or tea samples, but unless you get a whole packet that’s hardly considered a freebie.

Even (especially?) in these tough financial times, Japan is still a strongly consumer driven society, and no matter how cheapo the amount, you’re still expected to pull the wallet out if you want to get anything. This does not necessarily have to apply, however, for the sharp-eyed and active dumpster diver.

Allow me, for those who aren’t quite yet in the know, to explain what a dumpster diver is. Also known as a ‘freegan’, they’re the person who lives, on one level or another, on food and materials they find in dumpsters and waste disposal points that have been cast away by other individuals or businesses. Before you quickly scrunch your nose up in disgust, next time you walk past the neighbourhood garbage collection point, have a glance at it to see the kind of things people actually throw out.

Oh, the things you can find (If you don’t stay behind!)

In my two years of living in Tokyo, I have sourced heaps of stuff ranging from clothes, bags, kitchen utensils, storage containers, couches, beds, heaters, fans, mattresses, books, DVDs, suitcases, window blinds, even to an unopened 2kg bag of rice. The bag of rice was literally just sitting there by the rubbish bin in my neighbourhood as I was biking through. I did a double take, picked it up, tossed it into my bike basket and went along my merry way. The only reason I can think of somebody tossing out perfectly uncontaminated rice was that it was about 3 years old, and generally people here prefer to eat ‘new’ rice. That bag of rice could have ended up in the landfill, but instead it got to feed little ol’ me for over a solid month.

I was also able to send a large amount of dumpstered items to volunteer organizations that were collecting goods for vicitms of the 3.11 tsunami and earthquake disaster.  Somebody in my area left out a cardboard box full of mugs, bowls and plates out on the sidewalk so I wrapped them up in newspaper and sent them to Miyagi, one of the heaviest hit areas.

I had no moral issues about sending people stuff I picked off the street, as they were all very clean and in perfectly usable condition.

I quickly picked up the habit of analyzing rubbish bags and disposal areas while walking through the streets, mentally noting furniture and smaller items to return for later at a quieter time of the day.

The best time to forage for clothes is when the seasons start to change. One night in late September, when the air was gradually becoming crispier, I picked up four very large, very packed (and very soft) garbage bags filled with clothes, all neatly folded and some even freshly smelling of laundry detergent.

Honestly, who washes and folds their rubbish? I point to this as a great example of how far the hospitality level goes here in Japan. I greedily lugged these bags back to my share house and divvied up the contents with my Japanese and international housemates. I got some pretty cool t-shirts and gave away summer dresses and jeans to my eager and happy housemates who didn’t seem to care that I had just picked them up off the street.

Charity stores like Salvation Army are virtually non-existent in Tokyo, and secondhand clothes shops can be quite picky over what they choose to buy off you. It seems many people opt to toss out their out-of-season clothes rather than make the effort to drop them off to somebody who might appreciate them.

In order to have success as a dumpster diver, all you really need are a pair of sharp eyes and a total lack of shame combined with an air of unquestionable confidence. Or you can just be a ninja. That’s acceptable too. Being caught sifting through your neighbour’s rubbish and gaining unwanted attention may be something many people may want to avoid, especially in Tokyo, especially if you’re clearly a foreigner. But from my experience, many people simply don’t want to know what you’re doing when they see you in the middle of the night going through the bins, and many won’t even notice you as they walk right past. People are more oblivious to their surroundings than you can imagine.

And a word of warning

In certain areas in Japan it can actually be illegal to take away rubbish unless you’re an authorized rubbish collector, as the refuse is considered to be the property of the local government. Of course the chances of being persecuted for carrying away that couch you found at 3am atop a pile of rubbish bags the morning before collection day is incredibly slim, but it’s probably a good idea to be aware of this legal matter and check your local area rules on who has ‘ownership’ over your trash. Like I said, it helps if you’re a ninja.

We don’t want nobody arrested, and even if you get caught, we’ll deny any knowledge of ever knowing you or encouraging you to carry out criminal activity. Tokyo Cheapo does not condone illegal activities in any way, shape, manner or form.

Having said all that, I wish you all the very best in your Tokyo dumpster diving adventures!

Next time, we’ll explore the possibilities of dumpster diving for food and food waste in Tokyo.  All you starving artists and English teachers, please stay tuned.

Written by: Nikki Kittenmouth
Filed under: Lifestyle
Tags:
Sharing
Questions or comments about this article?
Start a thread on our community forum
Ask our local experts about Tokyo