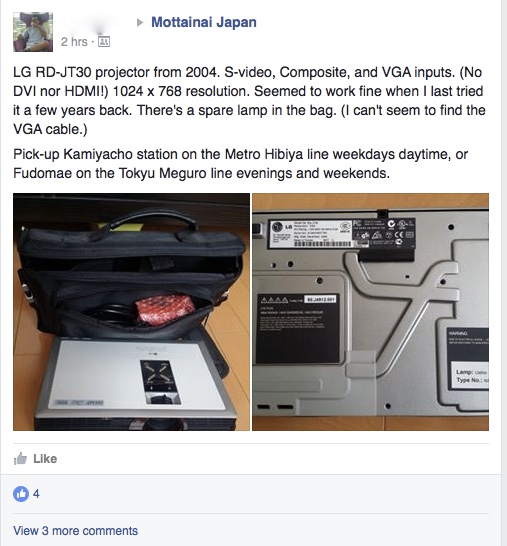 One person’s gomi* is another’s goldmine

The Mottainai Japan Facebook group was created in April of 2014 by Carlie Takahashi. The group is a clearinghouse where people living in Japan can offer things they don’t want or need to any takers—receiver must only pay postage or arrange pickup. The term mottainai is a little hard to define, but it carries a meaning close to “waste not, want not,” or “don’t waste.” Though the initial group had only a couple hundred members, in the two years since its inception, the membership has ballooned to over 12,000 people. We talked to group creator Carlie Takahashi and group admin Mark Charles Brafford about the group.

How did the group start?

Carlie:  There were a few things that prompted me to start Mottainai Japan. I had been complaining about the amount of stuff in my house for a long time—at least a couple of years—but it was hard to find anywhere to pass on unwanted items in Japan and there’s always a bit of guilt involved in throwing away items that are still useful. One day I was cleaning out my daughter’s closet and had a bag full of items that were too small for her and too good to throw away. I found a charity online that supports animals and I sent the clothes to them. The cost of the postage was around 2,000 yen, which was fine as it was a donation to charity, BUT later that night, a tiny voice in my head said that the 2,000 yen could actually have been put towards purchasing new clothes for my daughter. If I could give away my unwanted things for free while saving the 2,000 yen for shipping, that would be the best of both worlds for me: decluttering that was free and helped the environment.

Mark: I joined because I was opening a school and the expenses, plus the thought of buying new when most of the things I needed were out there with someone likely having to pay money to dispose of the same item. I became an admin because Carlie was going on vacation and asked for volunteers. I had received many things, so it was payback time.

What was your vision for the group?

Carlie: When I started the group, I hoped that someone would be able to find things they needed and pass along unwanted things for free…The group became what it is because of the members and what they brought to it. It evolved because of them and admin just made decisions at the time based on what felt right. We didn’t want Mottainai Japan to become a group where you could sell things because there were already established groups who did that. We liked charitable groups, so we decided to allow advertising for charities but not businesses.

Mark:  I think my role is keep everything running smoothly, I would like more items posted, communications to keep improving, and although no big problems have surfaced with scams or spammers I hope we stay a safe and friendly place.

“It has become bigger than I ever expected it to and it has helped a few people, either declutter their items or receive things they need.”

What’s the group like now? Why is it so popular?

Mark: Money is tight, group information has increased between members and friends, nobody wants to be wasteful.

Carlie: Currently there are about 20-30 people requesting to join the group every day, so I guess people are still spreading the word. The more members there are, the more things we can share, so mostly everyone is happy and it’s good for the environment as well. The group has been operating for just over 2 years now and there have been so many things passed on. There has been an unregistered car being offered, furniture, books, DVDs, clothes, makeup, shoes, computer and sports equipment to name just a few… From memory, discount tickets for hair removal (up to 50,000 yen) stand out as being worth the most but they were also controversial and we received a few complaints from members, so decided not to allow them any more. The weirdest thing that was offered was a “Western size erection ring—unopened of course.” 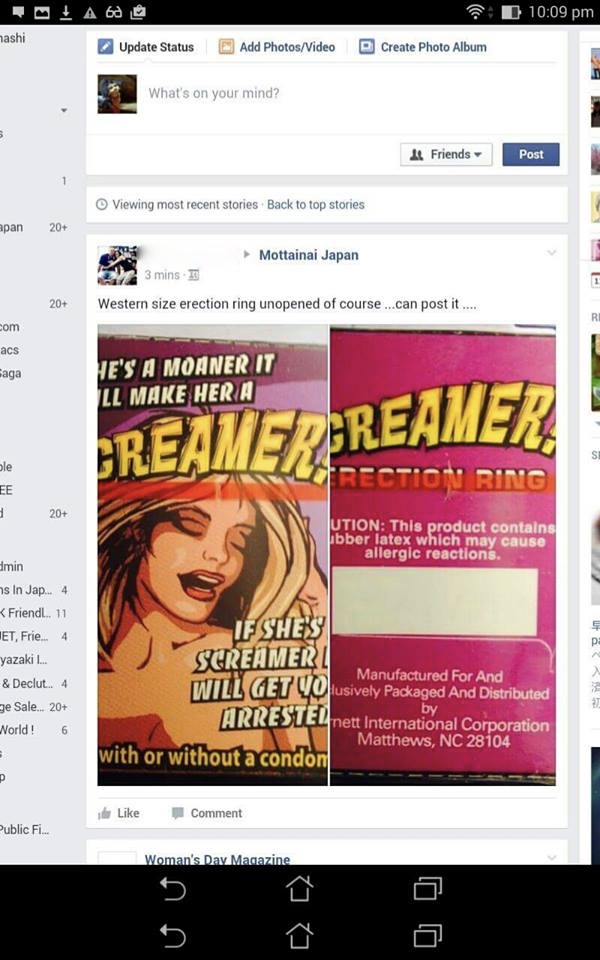 Any etiquette or tips for using the group?

Mark: Realize not everyone is a native English speaker, so stay calm. [Until] the item appeared, you had no plans to have it, so it is a want, not a need. The giver is not a store. They must be respected and they decide things at their pace. Some receivers get pushy. On the other hand, the receiver needs to be respected if they follow the rules. #1 is follow the rules, as if the person lives next door…Relax, and be respectful.

Thank you Carlie, Mark, and the other Mottainai Japan admins for making and running such a useful group! Many of us here at Tokyo Cheapo have used to group both to give and receive. Sharing is caring, y’all.

Mottainai Japan
Free
Official Website
Written by: Selena Hoy
Filed under: Lifestyle
Tags:
Sharing
Questions or comments about this article?
Start a thread on our community forum
Ask our local experts about Tokyo