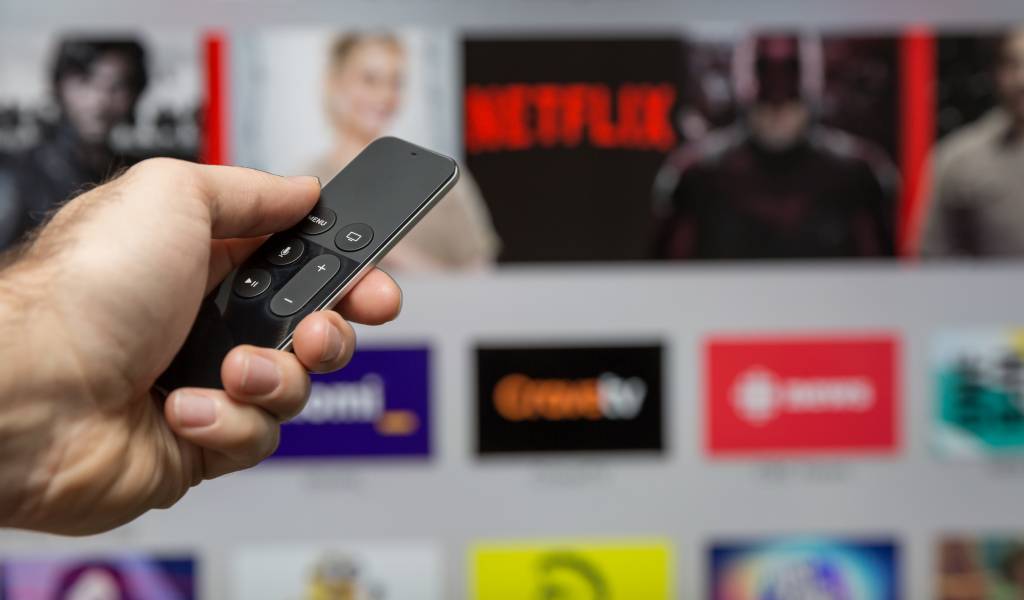 One small bummer of a thing when you’re living in a country not entirely your own is that YOU’RE MISSING YOUR SHOWS. Yeah, there are many strange and wonderful things about Japan: beautiful sights, amazing sounds, every day a challenge and an adventure! Bless. Which is all well and good, but what about my shows?

At the risk of sounding a bit bratty and obsessed, some of us just feel comforted by a spot of familiar TV. And let’s face it: the selection at Tsutaya can leave something to be desired. Plus, what’s up with their membership fees and weird strict rules and super-expensive late fees?

The service that’s best for you will depend on your viewing preferences and your tech setup. Following is a roundup of some of the streaming options available to you in Japan.

So pull up a zabuton and whip out the snacks; we’re gonna have a TV party tonight. Alright!

Heralded by Japanese media commentators as a “black ship” on its opening in Japan, Netflix is the most compelling of the TV streaming services—especially for foreign residents who aren’t concerned that there is no anime smorgasbord.

However, it’s a little different to what you might be used to. While the US version of Netflix has a great range of BBC and other British drama, they’re almost completely absent from Netflix Japan. On the plus side, Netflix Japan has a few movies and TV series that aren’t available on Netflix elsewhere. Netflix is also producing original Japanese programming—such as Terrace House, the Naked Director, Midnight Diner—which have been generously subtitled in English. All other Japanese content is not subtitled.

Netflix in Japan has three price tiers which are in a similar range to those offered outside Japan (note: all our prices below include consumption tax). While all plans offer unlimited viewing, the cheaper packages have some restrictions. 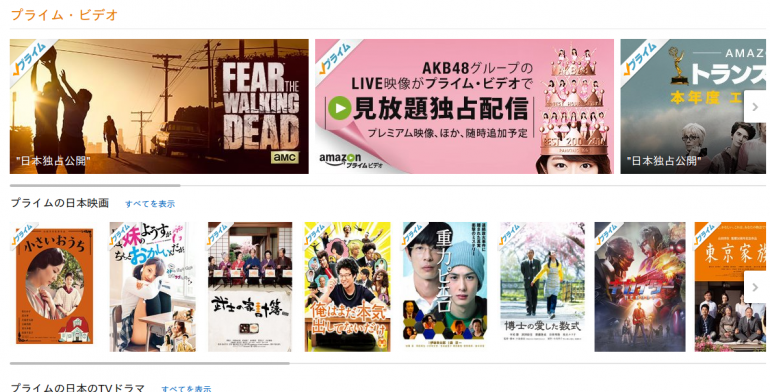 Amazon Prime Video has been streaming in Japan since 2015, with the offering getting bigger and better all the time. Even with recent price hikes, when compared to Netflix and Hulu, it’s a hell of a lot cheaper.

An annual payment of ¥4,900 in addition to a monthly payment of ¥500 gives you access to the video library—in addition to the other benefits that Amazon Prime membership provides (express delivery, special discounts, etc.).

While the content is heavily geared towards Japanese tastes (this is Japan) with lots of anime and loads of strangely-more-popular-in-Japan-than-elsewhere series like 24, Prison Break and Glee, if you dig a little deeper, there are all the fantastic Amazon originals such Fleabag, Mr. Robot, Bosch, and Goliath. It’s also got series that Netflix doesn’t, such as Westworld (not the latest season), Silicon Valley, and The Walking Dead.

The range of movies is also almost limitless, but most of them have prices for “renting” or “owning”. Renting means you can watch it as many times as you like in a limited period—usually 48 hours, while owning means you stream it any time you like. For example, Avengers Endgame costs ¥299 to rent and ¥2,000 to buy.

A recent addition to Prime Video is “channels”, which allows you to watch live TV from channels like:

One thing it loses out to when compared to Netflix is in serving international residents in Japan. Even if you switch the Amazon Japan interface to English, the Prime Video interface will stubbornly stick to Japanese. Also, there are no options for English subtitles for Japanese, or any other non-English content. Annoyingly, when watching English language content, you can’t even turn the Japanese subtitles off!

Disney+ launched in Japan in June 2020. The service includes the new originals—such as the Mandalorian—along with loads of content from the Disney back catalog including Marvel, Star Wars and Pixar.

Like Amazon, the main interface is stubbornly set to Japanese and we are yet to figure out a way to switch it to English. Films and TV series also start with a Japanese audio track, but you can switch the language to English from within the player.

As well as browser support, Disney+ also has apps for Android and iOS as well as newer smart TVs and digital streaming boxes. Another disappointment (maybe for just me) is lack of support on older Apple TV boxes.

The monthly cost is ¥770 which makes it pretty good value compared to Hulu or Netflix. The downside is the incredibly convoluted sign-up process. For some reason, you have to sign up for a Docomo account and enter your credit card through there before you sign up for the Disney+ account. Of course that means no English on sign-up and Docomo’s funky User Interface that won’t let you enter the normal katakana for non Japanese names.

There is a 30 day free trial period, so perhaps that’s the price you pay for having Docomo hoover up your personal information.

Hulu Japan is one of the few services that has support in English—you might have to hunt around for the English-language switch though. With an option to connect via Facebook, the process is even more simplified. A single payment page needs to be filled out with name, basic details and payment info. Also, make sure you don’t sign up on mobile; bizarrely, the payment page is only available in Japanese on the mobile site.

The all-you-can-watch service costs ¥1,026/month, and they claim to have 60,000 movies, dramas, and anime choices. You can try it out with a free two-week trial with option to cancel before the first month is charged.

While the overall TV selection isn’t quite as good as Netflix, they do have an enormous catalog of what they call “catch-up TV” (what we used to call re-runs), as well as a much wider selection of BBC and other British TV programs. So if you’re looking for Doctor Who, calming BBC wildlife documentaries or The Office (UK), then Hulu is your best choice.

Hulu is also a good bet if you like anime, J-movies, and K-dramas, as their selection will likely be much better than an overseas-based service. Of course, many choices will not be subtitled in English. This is excellent if you speak/understand Japanese well or want to study; not so much if you don’t speak Japanese/want mindless entertainment.

Also not available in Japan. While some HBO shows have been popular in Japan in the past, HBO itself isn’t that well known, so it will probably just continue to license its shows to other services and channels.

J:COM says they have about 14,800 selections for viewing, and 6,500 anime and drama titles, but the set-up page is quite a bit more confusing than Hulu’s. Existing J:COM members can do a free three-day trial by entering the membership number on their cable box, then can join the on-demand service for ¥933/month. However, non-members will have to sign up for J:COM first—with cable packages costing about ten times the cost of streaming services in Japan. You also can’t watch through your browser on your computer. You either have to get one of their set-top boxes or install the app through the App Store or Google Play.

This service first requires you to be either a Flet’s Hikari Next or Flex Hikari Premium customer. Once you are, you can add the on-demand service. The basic plan costs ¥2,750 per month (on top of the costs of your Flet’s service) and gets you either television OR video on demand (but not both). The ¥3,850 plan gets you access to 9,000 film titles plus over 40 TV channels.

The set-up is rather complicated, so intermediate Japanese or higher is recommended.

Another confusing-looking page, Rakuten does seem to have a corner on large selection, boasting about 180,000 titles. The basic site fee is ¥308 per month, and then you can choose the type of content you’d like to access: an additional ¥100 gets you anime access, ¥300 gets you films, and for ¥200 you can access television dramas. The whole shebang, once you include tax, would clock in at a little less than ¥1,000 per month.

If you are interested in J-dramas, K-dramas, and anime, Showtime could be a good choice. Also, Rakuten allows payment in bitcoin.

U-Next is another one that has a decent selection, as it claims to have over 20,000 titles, including a respectable international selection (the landing page says they have 117,000 titles, but this included karaoke song selections). Sign-up is relatively painless, and they offer a free 30-day trial (though as with most trials, credit card details are required.)

The monthly cost is ¥2,189, but there is a point system that gives you about ¥1,200 worth of points per month, which can be used toward future bills, making it possible to decrease the cost significantly after a short time.

Tsutaya is trying to enter the video-on-demand market, but is still clinging to the video rental model. Its plan allows you to choose up to 20 titles per month from among 4,000 selections, which sounds suspiciously like going to the video store. Granted, 20 selections per month is probably plenty for most people, but is not conducive to binge-watching TV series or placating film buffs. The monthly fee is ¥933, and at the time of writing, Tsutaya is offering a free month’s membership at the outset. The service does require the download of a Tsutaya application to watch on your computer.

This service is a bit different in that there is no membership fee or monthly fee. Sign-up is free, and you basically pay per view. This means that the per-film fee may be a bit steeper (a popular new release was ¥540/3 days, while an older release was ¥472/3 days), but if you are not someone who regularly watches enough TV to justify paying a monthly fee, it may be a good option. They offer about 80,000 titles.

AcTVila do run free trials sometimes so you can check out a few things at no cost.

Of course, if you want to watch Netflix or BBC iPlayer as they are in the US or UK respectively, you can try using a VPN to bypass the restrictions. If you’re looking for Japanese content to binge on, check out our guide to experiencing Japan through Netflix.

This post was originally published on April 28, 2015 and is regularly updated. Last update by Greg Lane: May 18, 2020.
Written by: Selena Hoy
Filed under: Lifestyle | Living
Tags:
Sharing
Questions or comments about this article?
Start a thread on our community forum
Ask our local experts about Tokyo