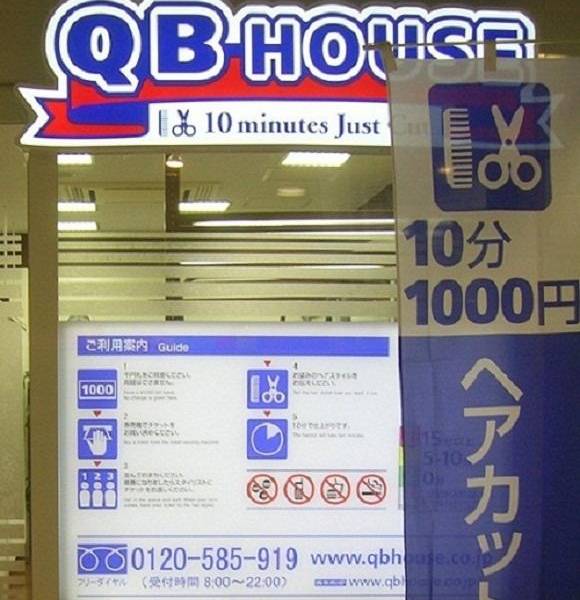 The last time I had short hair it was 1996 and the cut was what’s called “the mushroom”, which is somewhere south of the bowl cut in the hairdo hierarchy. Since then, haircuts for me have been strict trim deals only. In Tokyo, however, having a centimeter or two of split ends removed can set you back 4000yen at best, and double that, easily; and it’s no surprise, after adding in the invisible cost of the rinse, towel-dry, steamed towelettes, head massage, and shoulder-chop that is the standard treatment at salons here.

QB House chain stores are your best bet if you’re unwilling to spend more money than is necessary or longer than ten minutes on a ‘cut. Long and short hair jobs and anything in between costs 1000yen across the board. More elaborate services—dyeing, styling, perming—are not offered. Harried working professionals seem to be the target audience (although diehard cheapos are also guaranteed to get their fix); hence, perhaps, the decision to set up shop in the immediate vicinity of train stations throughout Tokyo. QB has 104 locations in the Tokyo area to date, all of which are listed by ward or train line on their website, and include Shibuya, Shinjuku, Sendagaya, and Akihabara to name but a few.

Meanwhile, Unicut 1000 is a slightly more obscure contender in the bargain haircut speed-race. So far, I’ve only been able to track this chain down to locations in Fuchu and Ikebukuro.

During my investigation of the Unicut in Fuchu, the proprietor indicated the elephantine vacuum tubes installed at each cutting station. Much like QB House salons, Unicut replaces the lengthy wash-and-dry procedure with a post-cut vacuum to remove hair detritus—QB, after all, stands for “quick barber”. Unsurprising, too, if the company mantra, “our product is not a haircut, but a shorter period of time” strikes you as slightly barbarous (barber-ous?). Nevertheless, the place delivers: customers are guaranteed that they will be trimmed into shape, hosed off, and out the door within ten minutes, all for under ten bucks.

Quote from “Barbers at the Gate”, article from the November 2, 2006 edition of The Economist

QB House
Official Website ⚠️ Link in Japanese
0120-585-919
10am-8pm, daily
varies slightly depending on location
Written by: Mine Serizawa
Filed under: Fashion
Tags:
Sharing
Questions or comments about this article?
Start a thread on our community forum
Ask our local experts about Tokyo