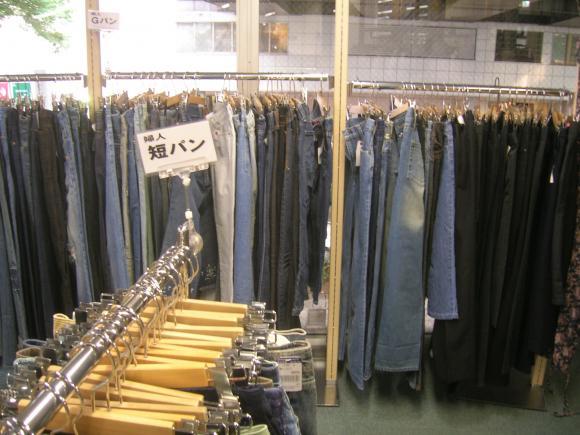 After playing changing room parkour and handing over upwards of fifty dollars for a cardigan or somesuch, I am often so overwhelmed by the exhausting nature of the exercise, plus residual guilt at trading the month’s phone bill for an assembled-in-Taiwan product, that said item rarely leaves my closet. Ultimately I am forced to admit that the appeal of “newness” is simply not worth the expenditure of energies.

As secondhand clothing disciples may already have realized, the term means something a little different in Tokyo, where “secondhand” usually also stands in for “vintage”, “trendy”, and thus, “exorbitant”. So-called recycle shops, on the other hand, are the real deal. This particular store, an NPO run by the city government in Fuchu, offers mainly adult clothing alongside children’s toys and clothing, jewelry, shoes and bags, some household goods, and assorted bric-a-brac  (in conditions that can be described as gently used to practically new. Not a moth hole in sight).

Pants fetch little more than 4-500yen, and rarely over 1000yen—I have on occasion unearthed a pair of Levi’s for 500—and for something in the 350-900yen range, it’s possible to find a yukata for the summer months or as an inexpensive omiyage.

For a one-time fee of 100yen, residents may also apply to become members and sell their self-priced goods through the recycle shop, which will retain a 20% commission…Convenient not only to avoid those badge-of-shame closet lurkers, but also to turn a profit on your own used goods.

The store is located on the second floor of Green Plaza Keyaki Hall, directly aross the street from the west exit at Fuchu station—perhaps a two-minute walk from train door to door.

Open with Maps
Mentioned in this article
Fuchu
Written by: Mine Serizawa
Filed under: Fashion | Shopping
Tags:
Sharing
Questions or comments about this article?
Start a thread on our community forum
Ask our local experts about Tokyo