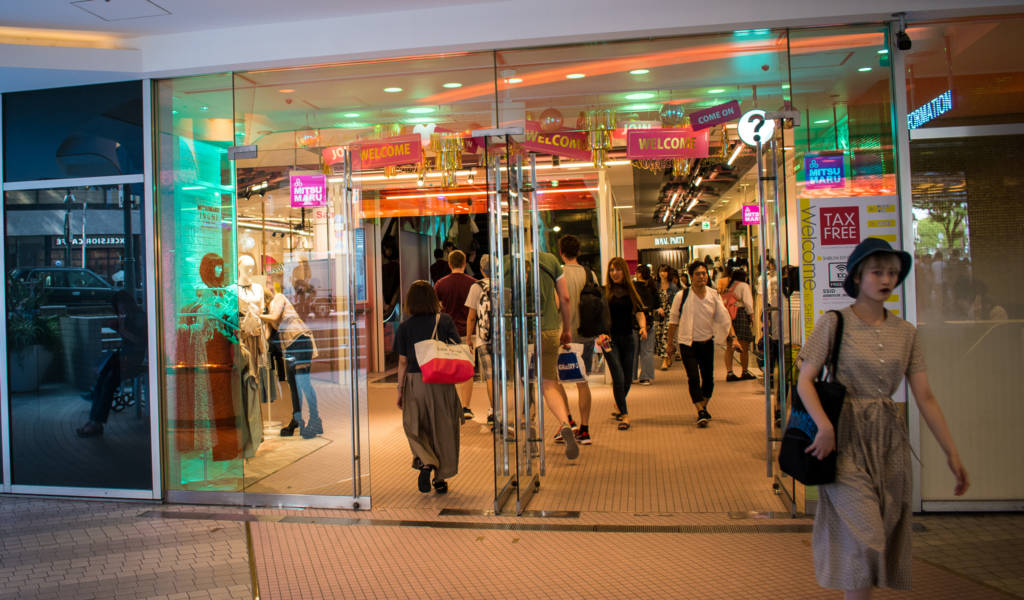 Founded in 1979 by the Tokyu company, Shibuya 109 was, in part—initially at least, developed in a spirit of competition. At that time, the Seibu department store chain was already gaining serious traction in central Shibuya, an area known for consumer-heavy culture, so Tokyu thought it was time to muscle in on the action. In doing so they changed the neighborhood’s landscape literally and metaphorically.

The history of Shibuya 109

This community was a family of smaller retail stores, each reflective of different youth subcultures, culminating in incredibly layered retail wonderland, where shoppers could find their tribe and explore the burgeoning avant-garde Tokyo fashion scene.

Although you’ll find all styles of clothing lining the jam-packed walls of the store, the subcultural movement which was and still to some degree is aligned with the history of 109 is the very Tokyo gyaru subculture. A Japanese-translation of “gal”, gyaru (ギャル) refers to trend-conscious, often Western-influenced females in their late teens and early twenties. Think long blond hair, slogan tees, tanned skin, and gravity-defying eyelashes. The gyaru trend originated in the 1970s following a campaign by Levis: “Levi’s for Gals”, but it truly peaked in the 1990s and early 2000s, when international influence really started to permeate the culture of contemporary Japan.

Today, four decades later and post-gyaru peak, 109 retains its original ethos. Andd it’s the subculture-centric ideology that’s made it such a popular destination for both locals and intrigued tourists alike. In fact, 109 is so ingrained in Japanese pop culture, the store was even added as an official emoji, It’s since been discontinued, but you’ll see it floating around from time to time.

What’s with the name?

Some people seem to assume that the name is a reference to the number of outlets contained within the mega-cylindrical structure, which is a fair guess, but it’s wrong. The title ‘109’ is actually a form of goroawase—a common type of Japanese wordplay where numbers are associated with words and symbols to give them an additional level of meaning.

For 109, the hidden meaning can be found in the split between numbers 10 and 9. The native Japanese character for 10 is ‘to’ (in kanji: 十), while for 9 it’s ‘kyu’ (九) and together through this reading they spell “to-kyu” aka the building’s company Tokyu.

In total, there are over 120 stores spread across the building’s 10 floors, selling everything from souvenirs to shoes, costumes, accessories, beauty products, and of course clothes, each with their own little subcultural niche. The way the interior was designed was to guide shoppers on a loop through each level of the floor, passing by each of the outlets inside.

It’s near impossible to run through a comprehensive guide to the floor plan of the store as it sits in some type of chronological order. To be honest, the best way to really embrace the fashion madness and overload that is 109 is to plan to not plan at all. So instead let’s dip into some highlights to look out for on the way.

A rainbow of shoes and colored contacts

The first basement level is home to the biggest collection of shoes in 109. From impossibly high heels to chunky boots, the selection is vast. Great news for those larger-footed folks, several stores do stock bigger-than-typical Japanese sizes. One store worthy of a mention is Esperanza XYZ. As well as having plenty of size options, the store specializes in shoes (of all sizes) made in Japan, making it a perfect place to pick up a special Japan-only pair of fresh kicks.

Outrageously colored contact lenses are a must-have accessory for the young in fashion-focused 109, and you’ll find the biggest collection you’ve ever seen in Voeux, a cosmetic store located in the building’s basement. We’d say the color choices span the rainbow, but that’d be doing Voeux a disservice because the selection honestly makes the rainbow look dull in comparison.

On the fourth floor is where you’ll find the street-style shoppers, milling about activewear-heavy outlets. Two standouts include the hip-hop culture obsessed Baby Shoop and an Adidas shop specially curated for folk who like to dress more feminine.

For all that Lolita girliness, Swankiss is your one-stop shop for ultra-sweet cuteness. Think pinks, frills, roses, over the top girly embellishments and love hearts galore. Located on the sixth floor the building, it’s like a teaser for what to expect on the next level.

On the seventh floor is Ma Maison cafe, where all good gyarus can go and treat themselves to some desserts. It’s also an excellent place to pick up some souvenirs like mini 109 tubes containing meticulously decorated lollipops. Once you’re done here, head on to the sweet-centric Moreru Mignon photo store to take some purikura-style photos between the human-size macaroon stools.

Located mere meters away from Shibuya Crossing, the heart of central Tokyo is right at 109’s doorstep—so what’s nearby really depends on what you’re after. If you’re looking to grab something to eat after making the marathon crawl along each of the 10 floors, well you’re in luck. Shibuya 109 is wedged between Shibuya Center Gai Shopping Street and Dogenzaka, two pedestrian-heavy backstreets jammed with bars eateries, restaurants and fast-food outlets serving everything from sushi and soba to pizza and pasta.

If you haven’t had enough of a 109 fix, there’s also a ‘brother’ store located a little closer to the scramble crossing. Once known as Shibuya 109 Men’s, this second store is now called Magnet by Shibuya 109. It includes a few extra international diners, both men’s and women’s retail outlets, and arguably the best-positioned public viewing platforms of Shibuya scramble on the top level “Mag’s Park” rooftop.

There is a cluster of other department stores within walking distance from 109. They include Shibuya Marui, the Tokyu Department Store, and Seibu Shibuya, all of which are dotted around the station.

Getting to 109 is simple. Just take the Hachiko Exit at Shibuya JR Station, cross the crossing and walk a few hundred meters west. Trust us you can’t miss it.

Learn more about another iconic shopping haven in Tokyo with our guide to Matsuya department store.