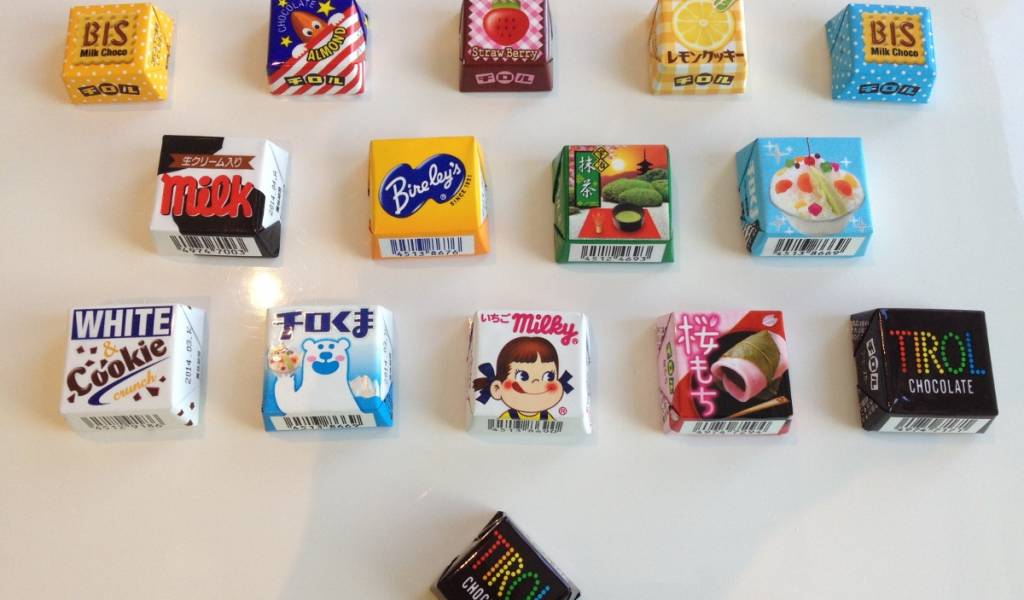 Tirol chocolates (pronounced chiroru in Japanese) are small squares of chocolate available from convenience stores, supermarkets and even pharmacies around Japan. Although they’re small, they’re also very cheap – and highly varied. Since their introduction in 1979, more than 114 different varieties have been produced. While the basic Tirol consists of chocolate with a heart of coffee nougat, some of the more unusual varieties over the years have included wine, rice, egg tart, matcha, kinako mochi, corn, sweet potato, pumpkin, black sesame and litchi.

During 13 years in Japan I’d barely given these small treats a second thought, but when it came to putting together a collection for this article, I admit to becoming slightly obsessed. In order to collect the variety that you see in the photo at the head of this post, I visited 4 supermarkets, 16 convenience stores, 2 liquor stores and 1 donki. At one particular 7-Eleven, when the clerk put a piece of tape on my precious Tirol I just about freaked out. No tape!! I was planning a photo shoot though so blemishes were not acceptable. I also discovered that there are ‘premium’ Tirol. The ‘Pecko chan’ chocolate in the photo above actually cost 30yen. When I found a variety pack containing 30 for 270yen at donki, I thought I’d hit the jackpot. However, the variety packs contain the slightly smaller variety – the convenience store type has about twice the volume.

If you mention Tirol to the average adult Japanese, they will tell you that at 20yen, they’re expensive.  This is because Tirol originally became famous for being the 10yen chocolate – a pretty good price point if you’ve only got a few coins in your pocket from grandpa.

In terms of the taste, you really have to try them yourself to see which one you like.  I wasn’t that impressed with the basic Tirol, but any of the milk chocolate varieties or the ones containing nuts or crunchy caramel were pretty good.

If you’re outside Japan and you want to get your hands on some Tirol, variety boxes with 27 pieces x 8 bags are available for 2,592yen through Amazon Japan here*.

* – We need to fund our Tirol habit so that’s an affiliate link – but we’d recommend them anyway.