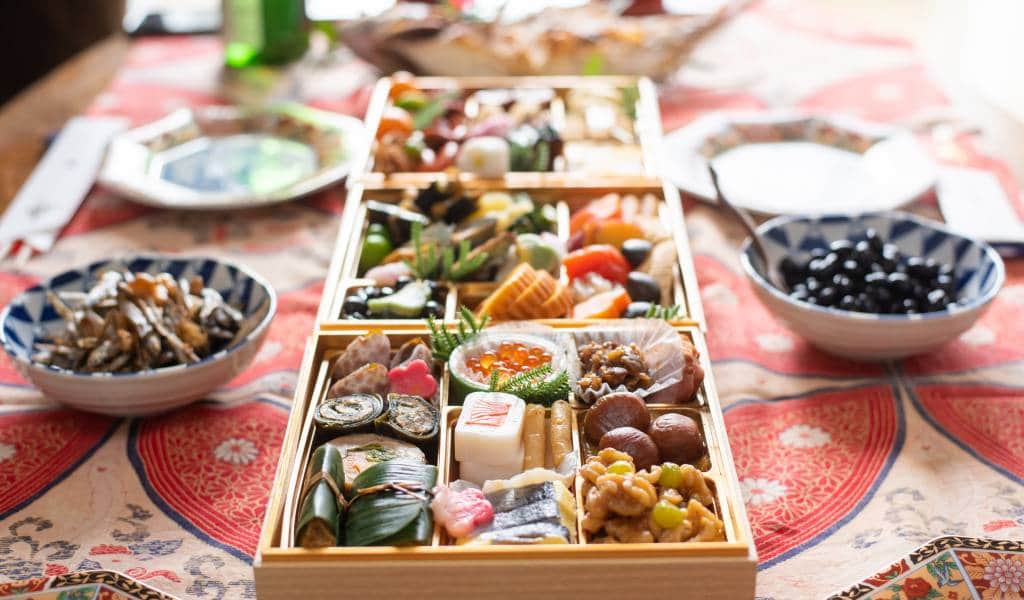 Welcoming the New Year is a big deal for most Japanese people, and one of the many New Year traditions is eating osechi ryori (お節料理), a Heian-era practice that still survives today.

Traditionally, it was taboo to cook during the first three days of the New Year, so housewives would prepare food that could last that long (remember, there were no refrigerators back then). With each dish carrying an auspicious meaning (prosperity, long life, and so on), the dishes would be artfully arranged in two- to five-tier lacquered boxes called jubako. Most osechi nowadays come in two or three tiers.

Ryori means cuisine, so osechi refers to a wide range of dishes. Common components of an osechi set include:

Modern osechi can be rather creative, so don’t be surprised to see osechi featuring pop culture icons. A few years back, this shop seriously cashed in on the Frozen hype.

One look at those jubako and you can tell that those meals definitely don’t come cheap. The average starting price for osechi is 10,000 yen, and prices can be more than twenty times higher. Yes, you read that right. In general, it is difficult to find cheap osechi, but not impossible. A little searching led to the following results (in Japanese):

A disclaimer, though: we cannot vouch for the taste or quality of these cheap osechi. They could be sketchy.

Also, note that most osechi are pre-ordered. You may have some luck seeing discounted osechi at department stores on New Year’s Day, but it’s best to play it safe and order in advance.

And because we are cheapos after all, one really cheap alternative is to make your own osechi. During my senior year of undergrad in the Philippines, my Japanese class had an osechi party, although we didn’t have enough jubako. If you think that it’s not osechi ryori without the boxes, your local 100-yen shop should have a few small ones.

The advantage of making your own osechi is that you can choose which dishes you want to include. Osechi sets tend to be pricey because they are comprised of so many dishes, which has made it unappealing for some people, as they may not want or be able to eat everything in a set because of preferences or food restrictions.

The internet is your friend when it comes to searching for osechi ryori recipes. Some of them are quite easy to make; tazukuri, for one, just requires anchovies, soy sauce, mirin, sugar, and sesame seeds. For our readers who don’t reside in Japan, you can try your local Asian grocery for ingredients, but it probably won’t hurt to substitute ingredients here and there.

If you want to sample as many dishes as possible cheaply, why don’t you hold an osechi party with your friends? Have them pick some dishes to make and enjoy them together, as we did. Have fun!

Written by: Tiffany
Filed under: Eating & Drinking | Holidays
Tags:
Sharing
Questions or comments about this article?
Start a thread on our community forum
Ask our local experts about Tokyo