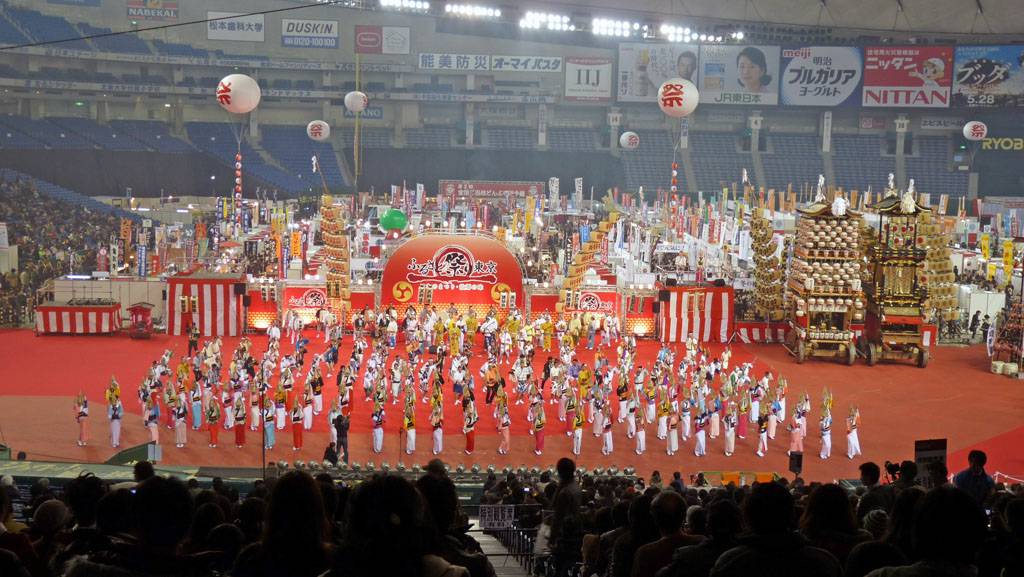 Happy New Year, cheapos! If you want to kick it off with some fun, start with these events. (And if you want to welcome 2019 the Japanese way, don’t forget to check out our post on Japanese New Year customs and traditions, such as hatsumode (the first temple/shrine visit of the year) and hatsuhinode (seeing the first sunrise).

Is it possible to sample the different specialties of Japan’s prefectures, witness their major festivals, and buy their local handicrafts… without having to leave Tokyo? Well, yes, thanks to the Furusato Matsuri, which will mark its 11th anniversary in 2019. Think of this huge event as a sampler of each prefecture’s pride and joy—their signature dishes and products, festivals, dances, and even their yuru-kyara (official mascots). At this event, you’ll get to learn not only about well-known prefectures like Kyoto and Hokkaido, but also about the less popular ones, like Tottori and Kochi.

If you missed Tokyo’s oldest flea market last December, worry not, as the second half of the Setagaya Boroichi will be held in January. With over 700 vendors selling everything under the sun, there’s bound to be something for you, whether you’re a collector of all things vintage or you’re just looking for some household items. To give you an idea of how popular the Setagaya Boroichi is, it’s said to attract over 200,000 visitors each day, so if you want to get dibs and great bargains on rare/unique items, it’s best to go early. And don’t forget to grab some of their signature food, daikan mochi, while you’re at it!

Don’t miss this event if you’re into cars, as the Tokyo Auto Salon is one of the world’s largest auto shows. The event will feature not only new/upcoming cars, but also new technologies, accessories, parts, and related merchandise. The first day is the business day, which means that it’s only open to industry insiders and the press, but if you have a premium ticket (which will be sold in limited quantities), you too can visit on the 12th from 2:00 pm.

Drink up at the Japan Brewers’ Cup! Held at an event hall at the end of Osanbashi Pier (which means a great view of the bay), it’s not to be missed if you’re a craft beer enthusiast. It’s both a beer competition—with judges making their assessments in the morning—and a festival for beer lovers. And what a festival it’s going to be—this year, it’ll have 32 Japanese craft breweries and six craft beer importers, offering a total of 300 varieties of beer. For an inexpensive entrance fee, you can get a drink for as little as ¥300 (the beer here costs ¥300–¥500, on average.)

Of course, it’s better to have beer with some munchies, so there will be some food booths, too. Additionally, the event will provide some entertainment; for instance, in previous years, guests were treated to performances by “beer idols”—no, not some random drunk folks, but cutesy J-pop singers chosen to endorse beer.

Daikoku Matsuri is a two-part festival taking place at Kanda Myojin Festival. On the Saturday, a purification ceremony will take place where loincloth-clad participants in a large basin filled with icy-cold water. The next day, admire the sharp skills presented at the hocho-shiki (a kitchen knife ceremony of old).