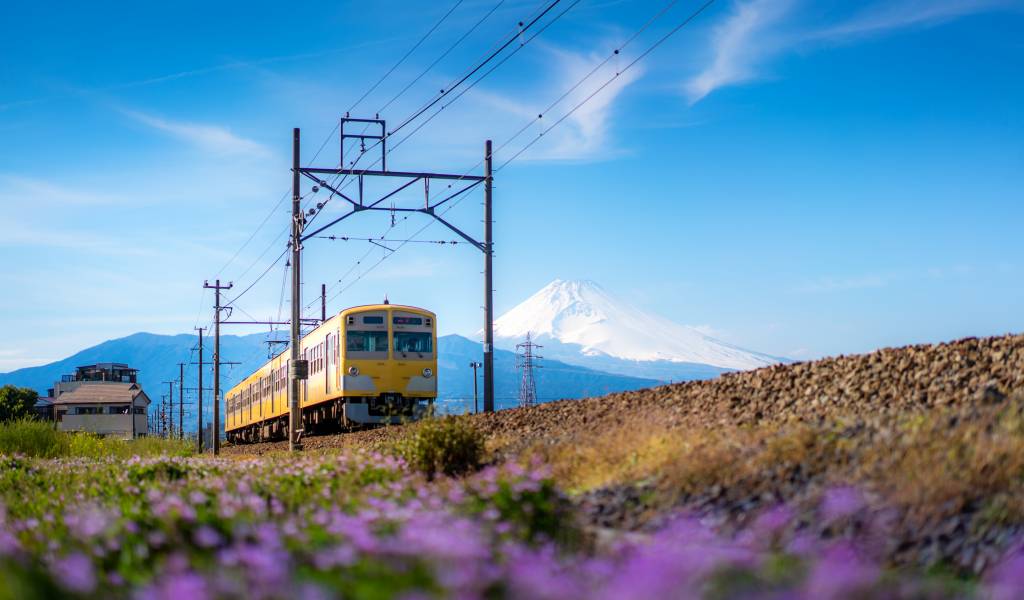 So you’ve been stuck in the big city for a while, beating your weary feet around the urban jungle while dreaming of an escape? Good news—Seishun 18 ticket season offering Japan budget travel options to the most frugal of travelers.

The Seishun 18 ticket, or Seishun Juuhachi Kippu, is a tri-annual discount ticket set that allows five (non-consecutive is OK) days of (almost) unlimited travel on JR lines (excluding limited express and bullet trains). One day’s ticket is valid for use by one traveler, meaning that you can split the Seishun 18 set with someone, as long as you travel together. Extreme couponers (yes, it’s a word now) take note: this is an opportunity to reach otherwise exorbitant destinations for just ¥11,850, which works out to ¥2,370 a day—now that’s cheap.

For details on where and when to buy this awesome rail pass, head over to our main post on the Seishun 18 ticket.

Here are five recommended getaway routes from Tokyo, in no particular order. Bonus points if you check them all off the travel list!

Ishinomaki is a beautiful coastal city in Miyagi Prefecture, part of the Tōhoku region. In March 2011, this region was gravely affected by the Great East Japan Earthquake and subsequent tsunamis. Ishinomaki has been working hard at making a recovery, and supporting local tourism is one way you can help.

The Ishinomaki area has awesome vistas, beaches, parks, gardens, museums and even islands (including the sacred Kinkasan Island, home of the Koganeyama shrine). While wandering around, you’ve got to check out the Ishinomaki Mangattan Museum, dedicated to manga author Shōtarō Ishinomori (creator of Cyborg 009 and the Kamen Rider mangas). The San Juan Bautista Park is also pretty cool, as it features a full-sized replica of the 17th century Japanese sailing ship of the same name. From Ishinomaki (sticking to JR) you can also access Wakuya Castle, the remnants of a late 16th-century fortress.

Nestled deep in the mountains of Gifu Prefecture lies Takayama, an authentic old town with entire streets of buildings dating back to the 17th-century Edo period. The local specialty is sake, and you can spend the cash you saved on transport sampling it at the many traditional breweries. You might see big balls of cedar branches hanging above the doors, but don’t worry—they only fall on you when you don’t pay for your sake!

Takayama is a great destination for nature-loving cheapos, who are free to hike the various mountain trails in the area. There are also a bunch of museums, galleries, and those old Japanese houses we mentioned—some of which are open to the public.

Hiroshima is one of the farthest west destinations that can be reached in a day using the Seishun 18 pass. The city’s tragic history is well known, but its people have reached forward into the future by letting their story serve as a way to promote world peace. Three must-visit places are the Peace Memorial Park, and the Peace Memorial Museum and iconic A-Bomb Dome (a building that survived largely intact) within the park.

Other spots to check out include the Hiroshima Prefectural Art Museum, the Garasu-no-sato glass museum, and Momijidani Park. The area is also not without castles and shrines, with Hiroshima Castle, Fukuyama Castle and Senko-ji temple worth a look. Miyajima Island and its famous Itsukushima Shrine (the one in the sea) are close by, and can be accessed with the Seishun 18 pass by hopping onto a ferry. Hiroshima is renowned for its food culture, so be sure not to leave without trying the okonomiyaki.

Home of the 1998 Winter Olympics and Paralympics, Nagano is a great spot for snowboarding and skiing (and chilled hiking in summer). The ski resorts of Hakuba, Shiga Kogen Heights and Nozawa Onsen are all popular. There are also so many hot springs that a traveler could legitimately go on a hot tubbing trip, with a little skiing and sightseeing on the side.

Nagano Prefecture is also home to the Jigokudani Snow Monkey Park, the (apparently) only place in the world where you can watch up-close (and sometimes a little too personal) Japan’s famous Snow Monkeys soaking in their own local onsen. Other cool attractions are the remains of the Ueda Castle, the 240-year-old Masuichi Sake Brewery, Zenkoji Buddhist Temple and the Olympic Memorial Arena in Nagano City.

Japan’s cultural center and historical capital can be reached fairly easily using the Seishun 18 ticket. Kyoto has over a dozen UNESCO World Heritage properties and a whole lot of ancient charm. You can don a kimono (you know you want to) and visit Kiyomizu Temple, or perhaps stroll under the cherry blossom trees lining the Kamogawa River.

Kyoto is known for its green tea, yatsuhashi (delicious triangular sweets) and tofu, so be sure to try some while you’re there. If you have extra time, a random but interesting idea is to visit the Toei Uzumasa Eigamura Movie Museum, where you can explore the history of Japanese cinema.

What to keep in mind when planning your trip

First of all, if your route involves a non-JR line, you’ll be looking at extra fares. In addition, some JR trains require seat reservations (which you’ll have to cough up for too). Since you can’t take any of the super fast trains, the Seishun 18 ticket might make your travel times longer and your routes a little more challenging than they normally would be, but for the crazy low price, it’s worth it.

You might think traveling overnight is a good idea—and it can be, but the night trains you can use are limited too. Two you can, at least in theory, ride are the Moonlight Nagara, which runs on a Tokyo-Nagoya-Ogaki route, and the Moonlight Shinshu from Shinjuku to Matsumoto (one direction only). Current information on these seasonal trains is hard to come by, as are tickets. Speak to staff at a JR ticket office for information.

For a detailed breakdown of the intricacies of the Seishun 18 ticket, take a look at the Japan Rail East website. And for train timetable information in English when you’re plotting your trip, Hyperdia is useful. For other trip ideas, check out our main Seishun 18 article.

Note: The above schedules are intended as estimated guides only.

Written by: Timote
Filed under: Getting around | Holidays
Tags:
Sharing
Questions or comments about this article?
Start a thread on our community forum
Ask our local experts about Tokyo