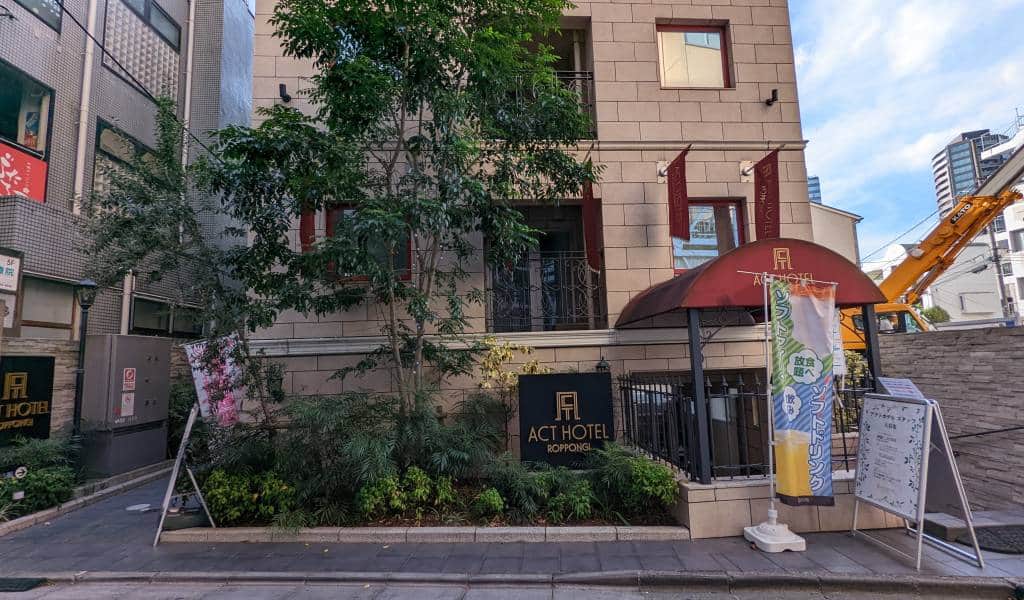 Act Hotel Roppongi is a quiet, low-rise hotel in an area that is not known to be either of those things. Rooms are quite standard, but the location couldn’t be better and it has an interesting rooftop terrace.

The hotel is only three storeys high plus a basement, but it is deceptively large, since the hotel is much longer than it is wide.

Although there’s a bar on the roof with beer, wine and cocktails, you can also just buy drinks at the convenience store around the corner and take them up to the roof. A warning though. The terrace is well fenced, so it doesn’t get a lot of breeze, so an early evening visit in mid September was akin to visiting the sauna.

Besides the aforementioned rooftop, most of the amenities offered by the hotel are located in the lobby. There is a vending machine, some alcoholic drinks, a microwave oven, a water dispenser, an anime library, and a coin laundry. There is also a machine dispending all-you-can-eat soft serve ice cream!

You can hang out on the roof and even take food or drink up to consume, but it’s highly dependent on the weather. In the warmer months, due to all the fences put up for privacy, it is stiflingly hot — even in the evening.

In total there are five different room configurations. There are single, double, and twin rooms, as well as “universal double” rooms and suites.

The single room we reviewed was functional but small. Natural light is a little limited in the room that we reviewed as the hotel is hard up against another building on one side.

Singles are a tight 12 sqm, while doubles, twins, and “universal doubles” are a much roomier 24 sqm. Suites are a spacious 62 sqm!

The rooms are reasonably well-appointed and a good place to get some sleep. You’ll probably want to get out during the day though.

The bed was comfortable. As with some other hotels we have reviewed, they boast about having Simmons beds.

Even though the airconditioner is directly over the end of the bed, it was quiet and relatively gentle. There’s no humidifier as the aircon seems to have a function to stop the air getting too dry.

There is a coffee maker in the room. While it resembles a nespresso machine, the pods are more like coffee bags.

The shower is of a non-step “rain fall” type, but since the cubicle is so small, it’s a bit hard to escape blasting yourself with cold water when you switch it on. Much better than a shower while standing in a bath though!

There is no view from anywhere in the hotel. Windows are frosted and the rooftop terrace has privacy fencing around it.

Act Hotel is located on a Roppongi backstreet, just a few meters from Roppongi Dōri, so the hotel has the peace and quiet of a backstreet while being really handy to the main road. It’s also one of the closest hotels to Roppongi Hills, so if you’re attending an event at Roppongi Hills or you have a business meeting in Mori Tower, this is an ideal place in which to base yourself.

The hotel is located just a short walk from Roppongi Station, which is served by the Tokyo Metro Hibiya Line and the Toei Oedo Line. Nogizaka Station on the Tokyo Metro Chiyoda Line is a 10 minute walk away.

From Haneda Airport, take the Monorail to Hamamatsucho, then switch to Daimon Station and jump on the Oedo Line to Roppongi Station.

From Narita Airport, take the Keisei Skyliner to Ueno then take a short walk to Yushima Station on the Tokyo Metro Chiyoda Line, then alight at Nogizaka Station. Alternatively, you can take the Narita Express to Tokyo, jump on the Tokyo Metro Marunouchi Line for one stop, then switch at Ginza to the Tokyo Metro Hibiya Line. Roppongi is a 10 minute ride from Ginza.

Roppongi is one of Tokyo’s top nightlife districts. Here, you can find everything from the cheap and cheery izakaya through to high end eateries. The area is seedy in parts, but as long as you don’t follow the touts, you’ll be fine.

Well known clubs and bars in the area include Muse, Jumanji 55, V2 Tokyo, and Havana Cafe.

For more, see our guide on things to do in Roppongi.

If you’re into art, Roppongi is a great place to be. Act Hotel is right on the edge of the “Roppongi Art triangle”. The three points on the triangle are Suntory Museum of Art within Tokyo Midtown, National Art Center Tokyo, and Mori Art Museum at Roppongi Hills with the iconic Maman sculpture at the base.

One thing that Roppongi doesn’t really do is “traditional Japan”, so if you’re looking for that old-Edo vibe, neither Act Hotel nor Roppongi are the the place for you.

Room packages don’t come with breakfast, but that’s just because they don’t really have breakfast. The “breakfast” deal is two pieces of plastic wrapped bread for ¥500, while the coffee is from the machine in your room using the coffee pods.

So no, we don’t recommend getting the breakfast. Instead, for a comvenience store breakfast, there is a Lawson or Family Mart just around the corner. If you’re after some baked items, Pompadour Bakery or L’Atelier du Pain (both open early) on the Roppongi Hills side of Roppongi Dōri Avenue are options, but the bread is (not surprisingly) to Japanese taste with sweet French pastries and Japanese-style breads like melon pan and anpan. McDonalds and Starbucks are just over the road within the Roppongi Hills complex.

For good, early morning coffee, head to Downstairs Coffee opposite Midtown, or Verve Coffee Roasters in the other direction. Both of these have some baked items to go with your coffee.

This hotel is ideal for anyone who wants the convenience of being in the middle of Roppongi, but wants a quiet place to come back to. The hotel itself isn’t a great place to hang out, but you can get a good night’s sleep.

We were unable to find information about what sustainability measures the hotel is taking. However, they did have some disposable items available in the lobby rather than providing them in the room.

There is construction on the neighboring (righthand side) plot until the end of September 2023, so if you plan to spend any time at all in your room during the day, request a room on the other side from the construction.