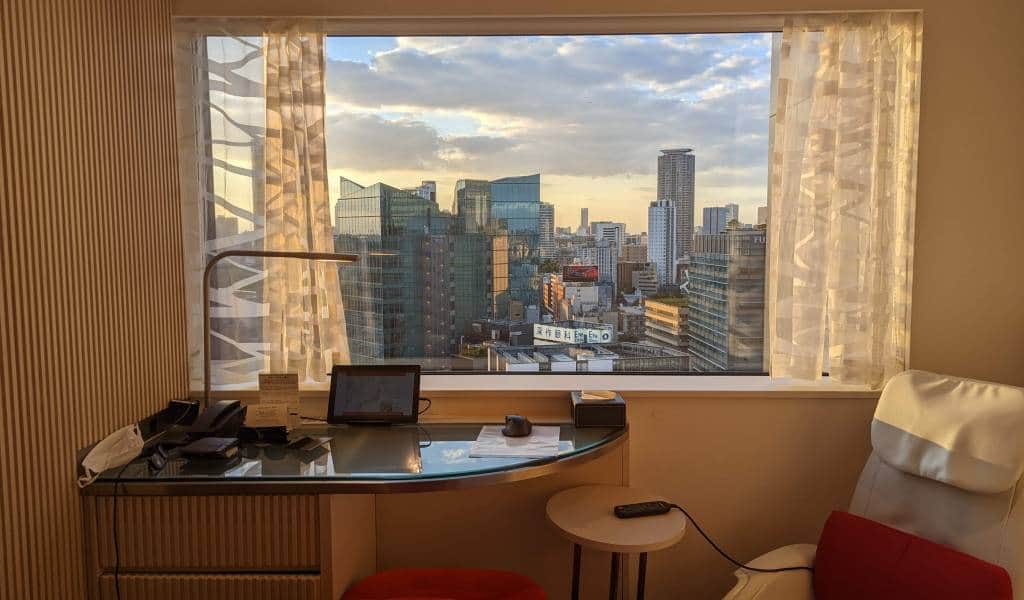 Remm, or “remm” as it is styled, is a large, modern hotel situated in the heart of Roppongi with sweeping urban vistas from the guest rooms.

The hotel has a fabulous location and well appointed rooms, but doesn’t do much beyond the basics.

The hotel is light on facilities. There’s no gym, no lounge, no bar, and no onsen. There are benches and counters in the lobby, but these aren’t really very practical if you want to set down your laptop and do some work. There are vending machines and microwave ovens in the lobby, and washing machines for your laundry on upper floors.

No, but you’re in Roppongi, so there are plenty of places outside the hotel to hang out.

The rooms are laid out to take best advantage of the view. They are compact, but that’s to be expected in Tokyo.

The desk is small, but it works as a place to get some work done. There are plenty of power outlets and USB charging outlets next to the desk, beside the bed and around the room.

There is a tablet in the room. But this is fully locked down with only hotel info and tourist info available, and handy guides like “how to use the toilet”. One cool feature — although maybe not to everyone’s liking — is the in-room massage chair. The chair looks rather small, but it still works quite well.

Getting into the bathroom does not require a step up from the room, and their is no bath tub, so if you’ve got mobility issues you don’t need to worry about climbing into the tub to take a shower. The shower cubicle and the “rain shower” are roomy enough so you can actually start the water running in the shower without dousing yourself in cold water.

The hotel is quite prominent in the area, so as long as you’re above about the 9th floor, you should have a nice, uninterrupted urban view of Tokyo. On our visit, our 17th floor room had an amazing view to the west, towards Shibuya and Shinjuku.

Remm is located on Gaien-higashi Dōri, right in the middle of Roppongi. Just stepping out onto the street from the hotel, you get a sense of the bustle and excitement of Roppongi.

The hotel is located above Roppongi Station, which is served by the Tokyo Metro Hibiya Line and the Toei Oedo Line. Nogizaka Station on the Tokyo Metro Chiyoda Line is a 5 minute walk away.

From Haneda Airport, take the Monorail to Hamamatsucho, then switch to Daimon Station and jump on the Oedo Line to Roppongi Station.

From Narita Airport, take the Keisei Skyliner to Ueno then take a short walk to Yushima Station on the Tokyo Metro Chiyoda Line, then alight at Nogizaka Station. Alternatively, you can take the Narita Express to Tokyo, jump on the Tokyo Metro Marunouchi Line for one stop, then switch at Ginza to the Tokyo Metro Hibiya Line. Roppongi is a 10 minute ride from Ginza.

Roppongi is one of Tokyo’s top nightlife districts. Here, you can find everything from cheap and cheery izakaya through to high end eateries. The area is seedy in parts, but as long as you don’t follow the touts, you’ll be fine.

Well known clubs and bars in the area include Muse, Jumanji 55, V2 Tokyo, and Havana Cafe.

For more, see our guide on things to do in Roppongi.

If you’re into art, Roppongi is a great place to be. Remm is right in the middle of the “Roppongi Art triangle”. The three points on the triangle are Suntory Museum of Art within Tokyo Midtown, National Art Center Tokyo, and Mori Art Museum at Roppongi Hills with the iconic Maman sculpture at the base.

One thing that Roppongi doesn’t really do is “traditional Japan”, so if you’re looking for that old-Edo vibe, neither Remm nor Roppongi are the place for you.

Breakfast is ¥1,850. It’s the usual mix of Japanese and western buffet with eggs, bacon, sausages, beans, french toast, and breads. Unlike a lot of smaller hotels, the Remm breakfast had cereals, which is surprisingly uncommon in Tokyo. Cedar, the restaurant on the 2nd floor is airy, pleasant, and relaxing and a nice place to start the day. There was a good choice of juices beyond the usual orange. There was nothing outstanding about the food, but it doesn’t disappoint either.

At ¥1,850 there are plenty of cheaper options in the neighbourhood, but if you want a pleasant start to your day and some volume to fuel your sightseeing, then it’s worth considering.

Another option for a light breakfast is Hoshino Coffee, which is a Showa-style coffee shop a few doors along towards Roppongi Crossing. A few minutes walk in the other direction will take you to Downstairs Coffee which has excellent espresso coffees and a few pastries and sandwiches.

Remm is ideal for a city break or if you want to get hyped for your stay in Tokyo. Just a glance out of the window at the inspiring view is enough to maintain a level of excitement.

In order to reduce plastic waste, there are no disposable items in the room such as tooth brushes, razors, hair brushes or tea. If needed, these items can be picked up from the lobby.

Request a room on a higher floor for the best view.