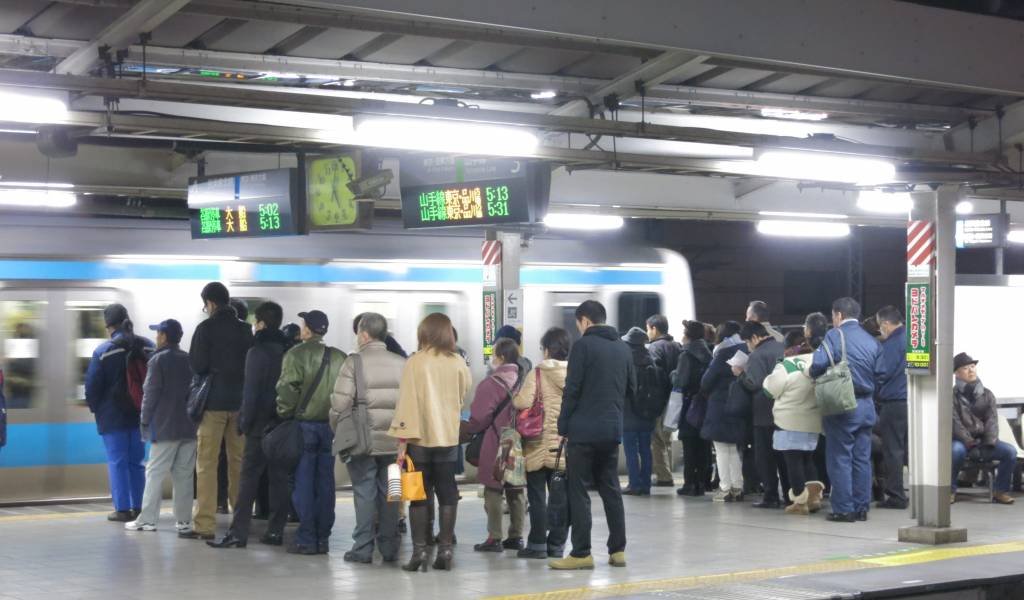 Whether it’s your first day in Tokyo or 10 years later, some things Tokyoites take in their stride are hard to get your head around! From suspiciously clean streets to silent train cars and super-human salarymen who hardly sleep, Tokyo has plenty of things that will never quite seem run of the mill, even if they do happen every day.

You may first notice it when you step into a silent train carriage, or when you hurry to an escalator to find a perfectly clear path waiting for you. The impressive level of social consideration that happens in Tokyo on a day-to-day level is unlike anywhere else in the world. With a thousand unwritten rules now being transformed into posters to inform the unwitting visitors of everything from not applying make-up on the train to wearing a back-pack backwards when boarding. The best parts of society shine through and focus on not bothering others, be it through annoying snacking in public (think of the crumbs, the smells!) or taking a call on a train. These sound extreme, but I have seen senior business men being denounced on trains for their phone ringing, when they didn’t even answer, just hurriedly cancelled the call. It means you can glide through your day as if all the lights were green—nap on trains, hurry up clear stairs as people queue to the left, never mess up your clothes with crumbs or even see any litter. There are blind spots in the collective conscience though, see if any one offers a pregnant woman or an elderly person a seat, but 8/10 isn’t bad Japan.

The famous vending machines of Tokyo selling everything from underwear to eggs (the former still unconfirmed, the latter true) do exist, but they are outnumbered by more regular roles. Of the 3.8 million machines, the most common you’ll see are the countless drinks machines, selling cold drinks in summer and hot in winter, ensuring you get your warm can of corn soup in a cold night.

There are alcohol machines too, requiring no age identification, and cigarette machines that do, as well as surprise gift machines for 1,000 yen.

The next most common use, however, and one you’ll have to get used to fast, is using them to order food in restaurants. While many places are table service, for ramen in particular, you’ll find a battered machine, not a waiter at the door. With a myriad of buttons in an array of colors, with extra labels and stars attached, it can be confusing, but there are sometimes English menus too—so you can at least match the price with the corresponding button. If at a total loss, ask a staff member, they will always be happy to help, and will will take your ticket after you’re done.

As seen on TV (or the internet anyways), the people cramming themselves into trains like gel pens in a 12-year-old’s pencil case can look insane. It’s not from the 80s, it’s not a one-off: this ritual of pushing, squeezing, molding and crushing takes place every day, without fail. If you’ve been in Tokyo for a while, the cartoons released by the Ministry of Transport showing train capacity may make you laugh. The 100% capacity looks deserted, and only when it gets to 180% do things start to look normal. Knowing that it goes up to 250%, those yet to visit might start to get a little concerned—and rightly so.

Some of the busiest lines include Keihin-Tohoku, the Tozai and Chuo, with all of the top ten being above 175% full. Being pushed up against 7 people at once might be the most physical contact you’ve had in weeks, but you’ll soon wish to be alone again. Tricks like the backwards-entry-and-lean will become second nature, as will entering with your phone already in viewing position, so when you become trapped, at least you can be entertained.

You wont have to be in the city too late at night before the drunk salarymen stumble across your path, swaying, singing and hopefully not puking. Like the unofficial mascot of nocturnal Tokyo, they are a special breed of superhero: drinking until the early hours, asleep on the pavement by 3am, but still back at their desks by 8am. There’s a reason Lawson sells smart white button-ups, and that reason is expressly for the binge-drinking salarymen. Spreadeagled across train carriage seats, balanced on urinals or propped up against walls in town, you never know where you’ll find one, but when you do, be sure to enjoy the cultural experience (and maybe leave them a bottle of water for the morning). If you would like to see more of these moments, we suggest following @shibuyameltdown on Instagram.

In most places, losing your wallet or phone pretty much means it’s gone for good, and there’s absolutely no hope if you lose cash.  Not so in Tokyo. Last year over $32 million was handed in to the lost and found department, with 75% being returned to owners. Despite a reward policy allowing a 5-20% claim from the finder, or full ownership after 3 months of going unclaimed, monetary gain is not the motivation (or you would just keep it in the first place). In ethics and morality classes at school, children are taught to imagine the feelings of the owner and to hand anything found into the nearest koban (police box). This results in everything from 10-yen coins to dentures to hundreds of thousands of umbrellas being handed in, cataloged and duly stored awaiting their owner. This video is a great example of this—you can’t lose it if you try. Things are not kept indefinitely though; if after 3 months the item is unclaimed and not wanted by the finder, it will be sold with money raised going to the Tokyo City Budget.

6. The age of singularity

Being alone can either be one of the most luxurious or the most lonely things in life, but in Tokyo it is completely and utterly normal. In a busy world of long hours, no siblings and busy friends, being on your own is the norm, and Tokyo caters for it an an amazing way. Whether you want to sleep in a capsule with just enough room for yourself and a TV screen, soak in an onsen or sit at an individual shuttered booth for ramen, there’s no need to see another soul. To some this may sound horrifying, but to others it’s like a kind of heaven. There’s no need to decide which of the 4-seater tables to take up in a restaurant, nor pay for a full hotel room when you just need to crash, nor any need for small talk or to hold-up appearances when you just want to eat and not look like a loner. Whether you’re a solo-traveler or just like your me-time, Tokyo is designed for you.

7. Tokyo will steal your heart but not your iPhone

With shiny new iPhones or wallets being the most common seat holder at Starbucks as owners head off to order without a second glance, you could say Tokyo is a pretty safe place when it comes to personal items. The lack of thieves and pickpockets means walking around with large amounts of cash is normal, enabling the country to continue as a cash-based society—unusual in the developed world. You’ll see the drunk salarymen splayed out in streets, smartphone still in hand, ripe for stealing, or wallets left on walls, cash waiting to be taken, but they won’t be.

But while your smartphone is safe, there are some blind spots. An umbrella “accidentally” taken or a bike “borrowed” is not uncommon, although the latter is often returned. Shame-based culture is strong here, and stealing is especially shameful. With supermarket posters depicting shoplifting children being returned to disappointed grandmothers rather than police officers, the importance of respect and reputation is high, as is the consideration of others.

Even when criminals do strike, it’s pretty considerate. I had a wallet stolen in a club, only to be carefully stripped of (very little) cash, nothing else, and placed in a clear bag by the road, along with other wallets, for police to find and return. I’m not saying it’s ideal, but better than losing ID cards, travel cards, bank cards and sentimental items too when casually tossed in a bin.

With a reputation as one of the cleanest cities in the world, Tokyo is a tough place to find a stray can or bottle as you explore the streets. Cleaning in Japan gets a lot of attention, be it the popular videos explaining how school children clean the school at the end of the day, or the impressive bullet train cleaning teams.

Being tidy is part of the culture of responsibility—from a young age, you clean up after yourself, be it putting your plate and cutlery away in a restaurant or old ladies brushing the street in front of their houses. You leave a place as you find it, which here means impeccably clean. The only part that people may find confusing is the lack of trash cans. If it’s not in the street, and it’s not in a bin …where the hell is it? The answer is home. Taking your trash home is in-built into society, so watch as people whip out that vital spare plastic bag for trash and dutifully place an empty bottle back into their bags. It’s hard to imagine this working anywhere else, but here it does.

9. Cash is king, queen and prince too

Head to Korea for bank cards linked to transport cards linked to vending machines, but in Tokyo, cash is the name of the game. Despite its modern reputation and occasional robots, Japan has a rather old-fashioned favor of the physical bank note and good old coins. Since interest rates are basically non-existent, there’s nothing to gain in banking it, and the cash in circulation is approximately 103 trillion yen a year and rising, making it 19% of Japan’s overall GDP.

Thanks to the low crime rate and honest attitude to returning lost items, carrying large amounts of cash is pretty normal, and paying for things like laptops, house deposits and cars in cash is expected. Although cards are accepted in many large stores and some restaurants (especially foreign chains) most of places still only take cash, so it’s best to be prepared when you arrive. Cash machines are choosy about accepting foreign cards, even if you see your logo on the machine, and many close in the evening (apparently still following old bank hours in the countryside, it has improved in the city). It’s easy to find yourself trapped without cash so make sure you have some on arrival, and keep a backup on you at all times.