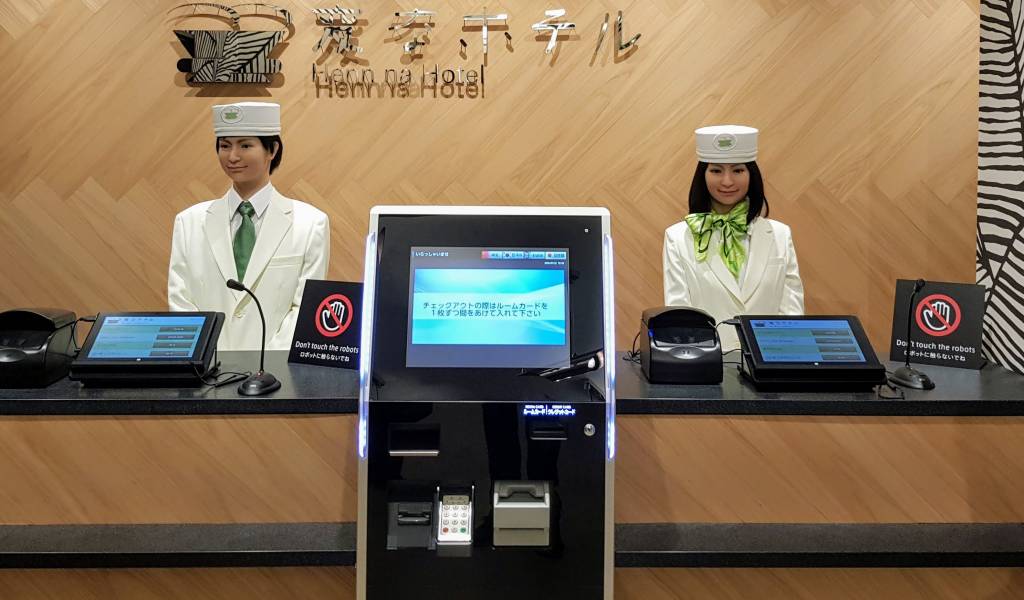 Five Places to Meet a Robot in Tokyo

If growing up with anime and video games has taught me anything, it’s that Japan has the monopoly on robots. That being said, where the heck are the robots in Tokyo? I mean schoolgirls, Pikachu, and awesome vending machines? Sure. You can’t turn around without bumping into those Japanese staples. But where are the rock ’em, sock ’ems? Where can a cheapo shake hands with a real-life future mechanical overlord? Here are five featured ‘bots in the big city—and a few bonuses besides.

What in the world is that? It looks like Johnny Five re-engineered by Care Bears. Is its name Pepper? Jeeze, not even Chappie was this cute. Pepper comes to us from mobile phone megacorp SoftBank. It can analyze your facial expressions, guess your current mood, and just be an overall cool dude to talk to when you’re feeling bummed out.

SoftBank claims Pepper isn’t technically a fully functional robot, and that Pepper’s purpose is to “enhance lives, facilitate relationships and connect people with the outside world.” All for the low, low price of ¥198,000 (plus 36 x monthly usage fees). If only there was already some kind of technology that could “inter-connect” people with one another to the outside world. A “net” if you will.

Regardless, you can check out Pepper for free at flagship Softbank shops in Ginza and Omotesando, as well as occasionally rolling around Labi Department stores and random other places. We even saw one outside a travel agency in Shibuya Station.

Remember this little guy? It’s been 17 years since Asimo was unveiled to the public, and I got to say, I’m beginning to lose my interest. Back in 2000, we were all flipping out over the thought of having our own little robot butler astronauts walking around, but now it’s 2018. I’m jaded from Call of Duty and iPhones. What can Asimo possibly do now that could—holy moly he can open bottles! Well, I’m sold. Bring on retirement if it means mini-cosmonaut here making trips to the fridge for me.

Asimo can be found showing off for free at the Honda Welcome Plaza in Aoyama, and according to online reviews, the Go-bot is a technological wonder to witness. Demos and picture ops are normally 1:30pm and 3pm on weekdays, and 11am, 1:30pm and 3pm on Saturdays (Sundays vary, but often only have the 11am slot), but you should check the calendar of events just to be safe.

3. The Miraikan National Museum of Science and Innovation

The Miraikan National Science Museum in Odaiba boasts a number of fantastic exhibitions dealing in robotic and earth sciences. The aptly named Create Your Future exhibit features the aforementioned Asimo, robotic vehicles, interactive humanoids, and even a robotic baby seal because of course Japan has a cute baby robotic seal. After comforting your new mechanical pinniped friend, you can experience the horrors of uncanny valley in Android: What is Human? To which I answer, who even knows anymore? We just stepped out of Wall-E and straight into West World.

The exhibit features advanced robotic androids so lifelike that they would make Harrison Ford in Blade Runner nervous. Take Kodomoroid for example, the child android that stepped straigt out of a psychological horror film, which continuously recites world news in multiple languages with a “detached voice.” Which is really what you want to look for in a scary murder-bot. Another is Otonaroid, an android that can be operated by visitors while other guests attempt small talk. This is “free conversation mode.” The museum calls the mode in which she silently stares at you with subtle facial expressions as “normal” mode.

Finally, complete your nightmare by caressing an emotionless and limbless baby crash test dummy named Telenoid, whose neutral appearance “enables people who communicate with it to feel that they are with anyone they wish.”

I am of course being completely facetious in my automatonophobia. The Miraikan offers visitors a unique opportunity to learn and interact with real-life robots (as well as dedicated earth science exhibits). The exhibits do seem to be aimed at kids, but I don’t want to even meet the guy that doesn’t turn seven the moment he comes face to face with a robot. Plus for just ¥620 admission, a cheapo really can’t go wrong. Also, I really feel like we’re just a few years off in technology from me marrying meeting my boyhood crush.

Replacing his popular predecessor, the new and improved Unicorn Gundam landed in Odaiba in Autumn 2017 and has upped its game with displays and an extra 1.7 m of robo-height.

Modeled on the RX-0 Unicorn Gundam from the most recent set within the Universal Century timeline, the replica is on a 1:1 scale and stands tall at 19.7 m.

As the previous model was based on a 1970 animation, it was lighter and less detailed to enable hand-drawings of slides, but today technological advances in animation have allowed for a more complex design with extra detail, panels and bulk in the 2010 series.

The model switches between Destroy Mode which involves flashing lights, and Unicorn Mode which involves a horn—so aim to get there for 11 a.m., 1 p.m., 3 p.m. or 5 p.m. to see the transformation—although it does only take about 10 seconds. He looks especially good at night, with a music and projection experience every half hour between  7:30pm and 9:30pm.

A free event filled with all the latest robotic developments, this event (next one taking place in 2020) alternates annually with IREX (coming up in December 2019) and has a focus on the service and industrial robots of the future. These tend to be focused on helping the elderly or improving factory efficiency, so there won’t be many insane battle robots if that’s what you were hoping for.

It’s still pretty cool though, you can try out the lifting support technology which feels simultaneously like you could take over the world or have your spine snapped at any given moment if it turns against you… so that’s fun. There are plenty of drones, companion robots and creepy humanoids, as well as the opportunity to find out what the creepy promise of “Man + Woman + Robot = Future” means too. Although entry is free you do have to register in advance, so be sure to remember your ID.

Bonus content: 3.5 other places you can see robots in Tokyo

To see robots in Tokyo, you might not need to do anything more than step off the plane. Narita Airport (in Chiba, to be accurate) occasionally trots out robots to make the passenger experience smoother—and presumably to liven things up. In spring 2016, Asimo was a meet-and-greet feature, and in January 2017 Narita trialed the Panasonic HOSPI robots to help bus tables. Last year, you could buy insurance or get information from a lady-like ‘bot called Kokoro in Terminal 1. Further robot assistants are expected to make an appearance in the run-up to the 2020 Tokyo Olympics.

Similarly, you might be able to spot a ‘bot at Haneda Airport (in Tokyo proper). In a bid to combat labor shortages during the Olympics, Haneda is looking into the viability of robot assistants. They have a whole project going on in the form of Haneda Robotics Lab, and have already tested cleaning, porting and info-providing robots. Keep an eye on their Facebook page to see what’s currently roaming the terminals.

You could always crash at a hotel staffed by robots. A branch of Nagasaki’s popular Henn-na Hotel (literally “strange hotel”) opened in Chiba in March 2017, and it offers quite the quirky (and quintessentially Japanese) experience. Hat-sporting dinosaur robots will check you in, and then your bags will be taken to your room by a porter robot. There are apparently 140 robots on the premises, with seven human staff on site to assist, should it be necessary. The hotel is just around the corner from Tokyo Disney Resort, and you can book a room for around US$100.

You might have heard of the “Robot Restaurant” in Shinjuku and be wondering why it’s not a big, shiny feature of this article. That’s because a) tickets are priced high, and b) it’s in a robot league of its own—one that includes scantily-clad women and eye-popping neon lights. Follow the link to read more about the Robot Restaurant and how to scoop discount tickets.

Apologies for this one as it’s completely not robots! But it’s still a fascinating artifact of Japanese culture so thought we’d tack it on the end.

Japan which prides itself on its very high standards of omotenashi (a concept roughly translated to hospitality) has some fascinating examples of highly choreographed customer service routines. The Japanese concept of hospitality can differ somewhat to Western expectations, which usually seems highly polished and can at times seem robotic in its perfection. Generally high-end department stores are the best spots to catch a glimpse, but here’s some examples:

This article was updated in March 2018 by Lily Crossley-Baxter.

Aoyama Ginza Odaiba Omotesando
Written by: Aaron Baggett
Filed under: Things to do
Tags:
Sharing
Questions or comments about this article?
Start a thread on our community forum
Ask our local experts about Tokyo