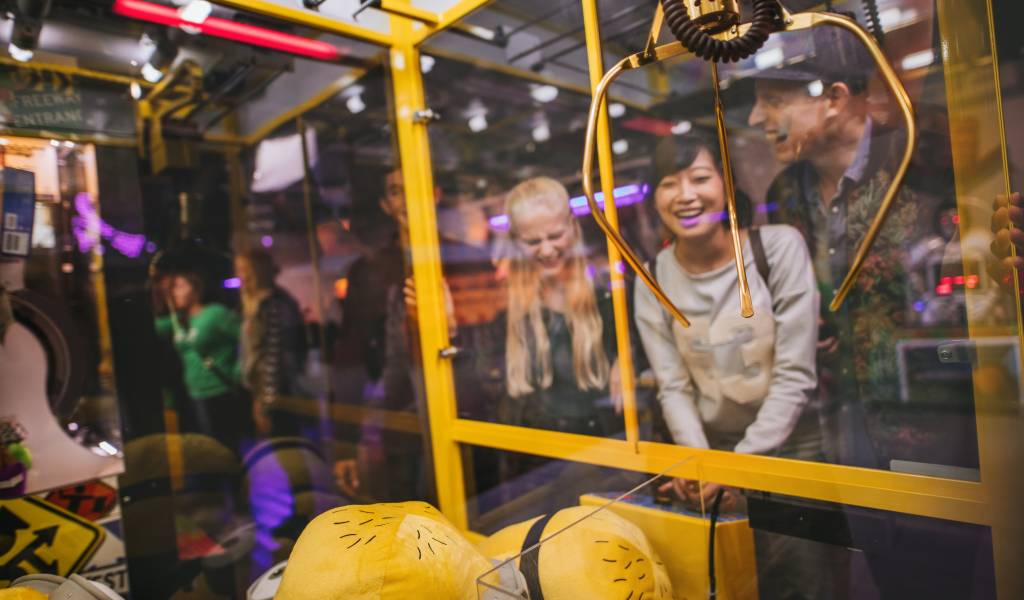 Respect The Claw: Tips for Whooping Ass at Crane Games

There are a lot of crane games out there trying to steal your money. The difference here in Japan from the machines in the West is that the game isn’t (entirely) shenanigans, and the prizes aren’t all as lame as something like over-stocked Bart Simpson dolls. Play the game right and you’ll win some dope prizes, or at least new-found confidence in your claw play. Play it wrong and the game plays you.

Everyone’s good at something. In sports some people are great at soccer, but couldn’t hit a baseball to save their life. UFO catchers  (or crane games) are no different. Look around in a game station at all the different prizes and you’ll see dozens of different ways to win. Some prizes you’ll have to push or pull, others you have to nudge or slide multiple times until you win, dropping ¥100 at every turn. You’ll learn pretty quickly what you suck at. Some games just demand high accuracy in and a lot of skill. Be perceptive. Just because it’s looks easy doesn’t mean it is. If a prize doesn’t budge after one or two wasted coins, consider playing something else.

2. Know when to walk away

The gambler’s fallacy is a pretty well known trope, but it’s worth remembering. That plastic Goku figure is not worth ¥2,000, and there is absolutely no guarantee that you’re going to win it. I don’t care if he’s dressed in the shirt from the filler episodes where he and Piccolo are trying to get their driver’s license. Just walk away. The teeter-totter like games in particular will mess with your head as that Yoshi doll moves back and forth, back and forth. ¥1,800 in and you have no idea if it is any closer to dropping or not. Really consider if that green dinosaur is worth two hours’ pay. Some places even let you use your Suica or Pasmo card to play. Yikes!

All these machines are designed to steal your money, but you can spot the difference between the machines with expensive looking giant Olafs at Round One and the sketchy catchers with He-Man pez dispensers amidst a haze of cigarette smoke. Places like Taito* game stations want you to win because they want you to keep playing. Not too often, but enough to feel good about yourself over a Pikachu doll. That being said, if a game feels like a rip, it probably is. If the claw feels weak, pick a different one. Giant claw games are especially sketchy because they’re meant to attract dudes trying to impress their lady. They usually cost more than ¥100 a turn, with claws daintier than your grandmother’s toes. You’ll lose money and look like a chump in the process.

*Note: The famous Taito arcade at Nishi-Shinjuku Station is closing in March 21, 2021. However, there are still other branches around Tokyo.

It goes without saying that most of the figmas, trinkets and plush dolls in UFO catchers can be found online and in shops for under ¥2,000 or less. Giant plushies and limited edition Pokemon merch might be different story, but they’re probably still out there. While it’s more about playing and the thrill of winning than the actual prize, if it does happen to be a prize that you really want like a character figma, there’s a good chance you’ll find it in a bargain bin at Tsutaya, Animate or one of the countless shops in Akihabara or Nakano Broadway. Nakano Broadway in particular has tons of shops with crane game figmas available for purchase for cheap. Besides, they’re not exactly works of art. Diehard figma collectors spend around ¥20,000 or more for handcrafted figures, and the kind found in crane games are considered knockoffs.

“Resetto” is most important word for the UFO catcher enthusiast. If you need a mulligan, or it looks like a prize is a lost cause, ask the staff to reset it. Want an even better tip? Ask the opposite sex to do it. I’ve had a lot of Japanese girls tell me the same thing too. Sometimes the staff will just take pity on you after watching you fail 15 times, setting it up so that the tiniest nudge will result in a win. However, I’ve also had staff (always a dude) just wedge the prize in a vice grip without even looking at me. You can also ask for tips. Even if you can’t speak Japanese, just say “dou” (how?) in a cute “what am I doing here” way, and maybe throw in a wink. They’ll start giving you tactics and gestures on how to win or where to aim. Or they’ll just think you’re a huge creep. I know I would.

– Normally, the small prizes next to the entrance offer the best chances to win—i.e., small prizes hugging the edge. This is particularly true for the big places like Taito or Sega game stations. They want people to be seen winning and having fun at the entrance to their den of lies.

– Claw machines and pinchers are a mixed bag in terms of easily winnable and easily pissing you off. Some require the old-school method of picking up a prize and holding your breath, while others use the claw to “flip” or knock the prize towards the edge, or push the prize through a wedge. In regards to the latter, and despite what tips you read online, I highly recommended that you ask the staff where to aim for each individual prize. In most cases you’ll use the hook of the claw to push and budge, but it never hurts to ask first. You’ll probably have to spend a turn testing the length of an open claw too, or better yet, watch someone else do it for free. Otherwise you’re going to overshoot the prize.

– Single claw games often offer some of the most high-value prizes. They are almost always attached to rings hanging from a large plastic ball. This plastic ball is your enemy. You cannot actually lift the prize, so you need to teeter-totter the ring left and right until you knock it off. Hitting the ball is almost always an automatic fail, but when the prize is on the very edge, try to use the claw to punch that ball right in its stupid face. You should be able to bend or knock it enough to score a win.

– Some Japanese peeps absolutely murder UFO catchers and have whole YouTube accounts dedicated to prize-catching whoop ass with tips and tricks. If you can’t be bothered to Google, try watching other players for a few minutes. Study their techniques and failures, or do what I do and swoop in and steal their half-won prize while they run off to get change.

Written by: Aaron Baggett
Filed under: Anime And Gaming
Tags:
Sharing
Questions or comments about this article?
Start a thread on our community forum
Ask our local experts about Tokyo