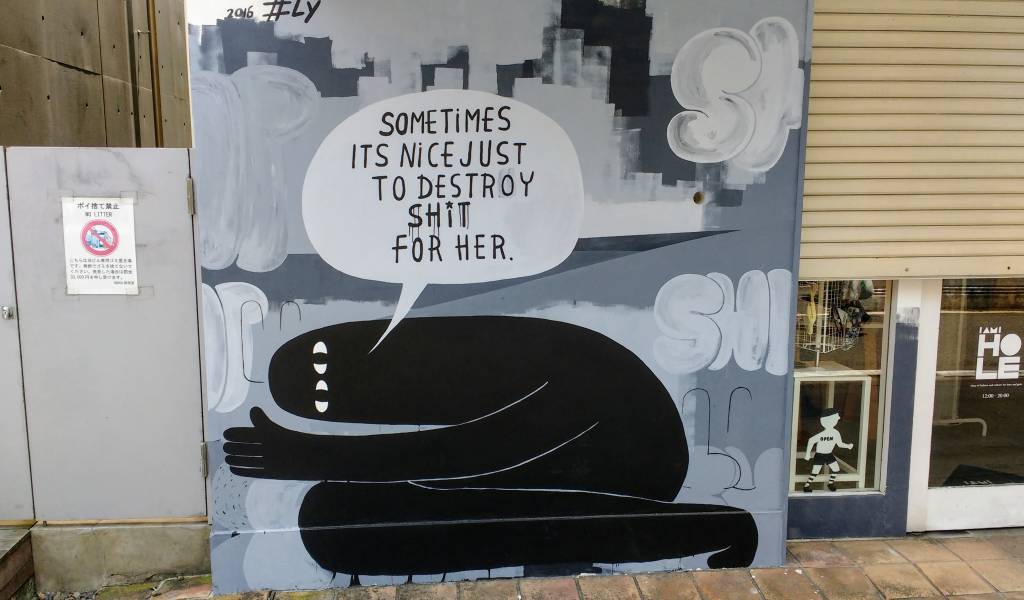 As the director of an artist-collective-turned-creative-agency, I get an inordinate amount of inquiries about Tokyo street art. Surely a city the size of Tokyo with its diverse architecture and eclectic talent pool must boast some amazing public art pieces?

The lazy answer to this question is “forget about it, Tokyo simply doesn’t have a street-art culture so don’t bother.” With a culture that views graffiti as vandalism and has few social systems in place to foster the arts, it’s not a surprise that Tokyo lags behind in the street-art scene.

But that’s changing. Cities like New York, London, Mexico City, Paris and Melbourne have always had a rich street-art culture, but recently many smaller cities around the globe have also adopted street-mural initiatives as a means of urban renewal, and there are signs that Tokyo is slowly embracing this Western trend.

So over the coming weeks, I will be writing a series of articles highlighting the large-scale street-art projects as well as smaller art walls to be found throughout the Big Sushi, from public work that has been hiding in broad daylight for ages, to more recent endeavors that are beginning to pop up all over the city.

My first report begins with an initiative led by some new kids on the block, the BnA Hotel Koenji crew.

It seems this ambitious collective is not limiting their efforts to the lodging business, but are now also extending their artistic efforts to include public art. In October of last year, the BnA crew started the Mural City Project (MCP), a street-art initiative done in cooperation with local government designed to transform local neighborhoods through the creation of public murals.

Being their home base, it was only natural that Koenji would be the neighborhood to kick off the MCP project.

“Koenji is the perfect ‘starter’ neighborhood for this kind of project, “ says BnA spokesperson Sabrina Suljevic. ”Koenji has been a hub for young creatives since the early 70s, it has a supportive local government and a supportive community.”

In the early stages of the Koenji MCP (KMCP), the group has already created 4 murals and plans for more are in the works. After Koenji, apparently the crew have their eyes on Toranomon, where the local government is keen to attract more visitors to a part of the city that is known as more of a business district than a cultural hub. With the help of BnA’s Art Director Kenji Daikoku, we’re confident the transformation will be quick and powerful.

Details on the KMCP murals are below, complete with artist information and directions for finding the artwork in person. If you get lost, just stop by the BnA Hotel Koenji where the friendly staff will be more than happy to point you in the right direction.

About the artist: Beginning his painting career back in 2009, Nigamushi is no rookie when it to comes to mural creation, having worked on Facebook Japan’s office ceiling mural and collaborated on works for ‘Forest for the Trees’ mural project in Poland. One of Nigamushi’s strongest influences is that of 70s Pink Violence movies and Pop Art which can be clearly seen in his women driving into sunset while “Mustachio” gets hit by car mural dedicated to “No Parking Anytime” in one of Koenji’s side streets.

Artist: Yohei Takahashi
Date of completion: March 2017
Location: Koenji’s Pal Street, opposite the Pachinko parlor. Use the north or south exit from Koenji Station. 5 mins from station (Usually visible after 5pm. Sometimes visible during the day but as this mural is on the shutter of a store, viewing times are subject to change.)

About the artist: Born in Tokyo in 1987, Yohei Takahashi is one of the city’s most acclaimed live painters, earning him the title of the first “king” of live painting dojo in his teens. Yohei’s talents lie in capturing the wild beauty of animals through his use of vivid colors and fluid lines. With Yohei’s years of experience creating large scale murals, clear vision and supreme artistic skill, the BnA team knew and trusted his ability to turn a graffitied shop shutter into a true piece of art.

KMCP#2 is an homage to both Koenji’s famous Awadori Festival and Yohei’s favorite subject, the wolf. The dancers and the wolves are painted in such fluid stokes they seem to dance across the shutter, it’s hard to tell where human begins and animal ends.

About the artist: Born in Tokyo in 1981 it’s almost impossible to find “Odakun” in a state other than beaming with energy! Behind the warm smile is a talented artist whose laser-beam focus and unique painting style influenced by woodblock printing produces gloriously colorful works.

KMCP#3 is a temporary mural painted on an apartment block owned by Koenji local and loved sento (bathhouse) Kosugiyu. Kosugiyu Sento in collaboration with BnA Hotel Koenji are currently running “アーティストin 銭湯,” a project where artists are invited for a 1-month residency to create work inspired by the sento and eventually to be exhibited in the sento.

About the artists: Formed in 2007, Osaka-based artist unit Whole9 consists of two highly skilled painters. Hitch, in charge of “representational painting,” focuses on painting realistic images of people, animals and nature, while Simo concentrates on “abstract painting,” binding the two styles together to create a cohesive piece of work. W9 is heavily influenced by street art and urban underground culture, clearly visible in their work.

Finding the perfect balance between their two different painting styles, Whole9 are able to create large-scale murals in an unbelievably quick time. KMCP#4 was finished in just under one week with less than optimum weather and huge scale (20-meter wall). To date, this is the biggest wall MCP and Whole9 have worked with, but the art work speaks for itself—a world-class mural right in the heart of Koenji.

Daniel Harris Rosen is an artist, writer, producer and creative director based in Tokyo. His agency TokyoDex is dedicated to enhancing people’s lives through bringing art to unexpected places.
Written by: Daniel Rosen
Filed under: Art | Things to do
Tags:
Sharing
Questions or comments about this article?
Start a thread on our community forum
Ask our local experts about Tokyo