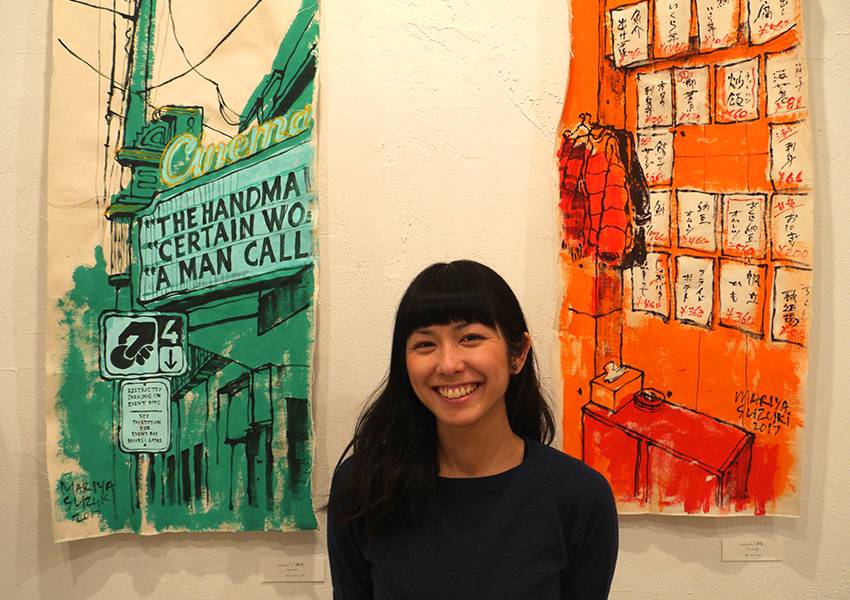 “I like to draw the mundane moments that otherwise flit away and are forgotten.”

When most of people walk around town, they see a dissonant array of buildings, people and objects that add up to little more than background noise. When artist/illustrator Mariya Suzuki takes to the city, the same drab terrain comes to life in bold colors and insightful vignettes of the intimacy born between people and the places they inhabit.

“I capture scenes from everyday life, so in a way, my drawings are like my diary,” explains Suzuki. “I like to draw the mundane moments that otherwise flit away and are forgotten.”

In her new show, “Urban Types,” on display now through February 19 at Books & Sons in Gakugeidaku, Suzuki makes the mundane magical as her detailed musings are shown in bolder colors and on larger canvases than previous work. This new palette and scale may have been influenced by the mural work the artist did last year for several office installations, or it may be because she just returned from a trip across the colorful expanse of the United States which inspired these pieces.

The title “Urban Types” is both a nod to the exhibition space “Books & Sons,” a used bookstore that specializes in typography books, and a tribute to the many types of cityscapes Suzuki encountered on this recent journey. In Books & Sons, Suzuki could not have found a better alternative art space to show her most recent oeuvre. With its high ceilings and raw interior, it looks more like a bookshop you would happen upon in Brooklyn rather than Tokyo. She makes great use of this rare venue, paying attention to detail not only in the works themselves, but also to the installation as whole. In addition to her larger pieces hung on the the walls, she also has a variety of original hand-made merchandise on tables in the middle of the room as well as pieces hanging from the ceiling.

“In this show, I wanted to make a variety of work so people can see it in different forms,” says Suzuki. “I think the pieces hanging from the ceiling create a fun atmosphere and make the entire show come together as a whole.”
Suzuki said she will be spending as much time in the gallery as possible, so if your timing is good, you might have the chance to meet her in person. This is definitely a plus, as the artist herself is as whimsical and exuberant as her artwork. And although Gakugeidaku may seem off the beaten path for you hardcore Tokyo urbanites, it’s only a 10-minute ride from Shibuya, and with its many cool cafes and watering holes, it certainly has the beginnings of a nascent hipster neighborhood. Definitely worth the trip.

Daniel Harris Rosen is an artist, writer, producer and creative director based in Tokyo. His agency TokyoDex is dedicated to enhancing people’s lives through bringing art to unexpected places.
Open with Maps
Written by: Daniel Rosen
Filed under: Art
Sharing
Questions or comments about this article?
Start a thread on our community forum
Ask our local experts about Tokyo