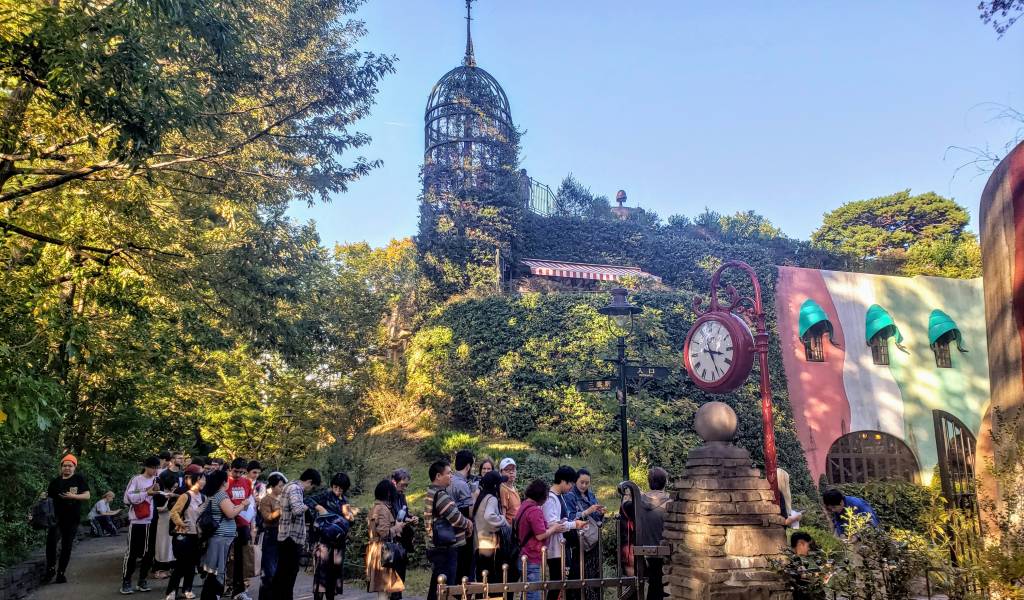 Lose Your Way at the Ghibli Museum in Mitaka, Tokyo

Studio Ghibli was a part of my childhood in the same way that Disney and Universal were — before they started rolling out direct-to-video bastardized sing-a-longs of all my childhood memories. I have probably seen Pom Poko about as many times as I have seen Star Wars (and I have seen Star Wars a lot). If you have not seen Pom Poko, but, like me, hold a deep appreciation for heartwarming stories about raccoons waging war on humanity, you need to see it. For all the other Ghibli and Miyazaki superfans, your next step is to visit the Ghibli Museum in Mitaka.

Buying tickets for the Ghibli Museum

The Ghibli Museum is a great experience for young and old alike, and for ¥1,000 a pop you can’t go wrong. However, the Ghibli Museum is also one of the most popular attractions in Tokyo, and you need to buy tickets in advance. This isn’t a recommendation, it is quite literally a requirement: you cannot purchase tickets at the museum.

Ticket prices are as follows:

Tickets sell out fast, but historically foreign visitors were given an advantage: they could buy tickets up to three months in advance through JTB travel agencies overseas. Currently (as of Feb. 2023), overseas ticket sales remain suspended. Hopefully once things pick up again, ticket sales through JTB will resume.

Currently, all reservations must be made through the Lawson convenience store website. As a general rule, tickets for the next month go on sale from 10 a.m. on the 10th of each month.

Whatever the case is, a trip to the Ghibli Museum should be planned way in advance so you can get tickets for the date and time you want.

Important: check in advance for when they close, which is usually just once a week on Tuesdays and year-end holidays, but that’s still subject to change.

Getting to the Ghibli Museum

The museum is within the bounds of Inokashira Park in Mitaka, on the west side of Tokyo. To get there, take the JR Chūō Line from Shinjuku Station (about 20 minutes). From Mitaka Station, you can either walk to the museum (just follow the signs — it’s a 15-minute stroll), or catch a shuttle bus (¥210 one-way; ¥320 return). There’s about one bus every 10 minutes. Sadly it’s not a cat bus. Though it does have a picture of the cat bus on it. Meta!

Inside the Ghibli Museum

If I had seen the giant Totoro (below) as a kid, my head would have exploded from the sheer whimsical power emitting from him. I mean just look at his huge fuzzy face. For all we know, the cat bus is about to pull up at any moment.

The Ghibli Museum has no set path and was designed by Hayao Miyazaki himself. It is obviously aimed at children, but adults should have no trouble becoming lost in Miyazaki’s world. Indeed, the museum’s motto is “Let’s lose our way together.”

The inside of the museum is a bit like a maze. It looks like Bruce Wayne’s manor built in an alternate universe, in which he grew up spoiled and happy without the memory of his dead parents to sully his mood 24/7. There are a couple of permanent attractions, such as the bottom floor’s history of animation with an impressive assortment of zoetropes, stroboscopes, and other cool things I had to Google to figure out what to call them.

There is also an exhibit dedicated to the life and work of Hayao Miyazaki. It gives an intimate tour into his journals and drawings; while it is impressively detailed, the most memorable aspect that it left with me is that the life of an animator really sucks. That and Hayao Miyazaki has smoked more cigarettes than Joe Camel.

There are often special temporary exhibitions, too. Recently, one of these involved a cat bus for adults to clamber around. Sadly, that’s gone now and only kids under 12 can get close to the version of the cat bus on display.

The robot on the roof

At the top of the museum is a full-scale replica of the robot from Castle in the Sky, and it’s one of the only spots where you’re permitted to take photos. Clamber up to see it and check out the architecture of the museum at the same time.

Exclusive films at the Ghibli Museum

Another cool thing you’ll find at the Ghibli Museum is that a ticket for a secret Studio Ghibli short film is included with the price. These shorts have never and will never be released outside of the museum, so this is a really good opportunity to gain an advantage over an annoying anime fan that likes to name-drop obscure films no one has ever seen.

The Ghibli Museum has a cozy little tearoom where you can take a break from the crowds and enjoy a cute cappuccino and light meal. There’s also a gift shop where you can pick up memorabilia and maybe a souvenir or two. But be warned, things aren’t cheap!

If you still can’t get enough of all things Ghibli, then it might be worth to check out the world’s first (and only) Ghibli themepark. It is on the site of the former Aichi Expo Memorial Park, which is an hour’s train ride from Nagoya. Learn more about the attractions here.

Find Ghibli fun all over the capital with our special Tokyo for Ghibli lovers guide.