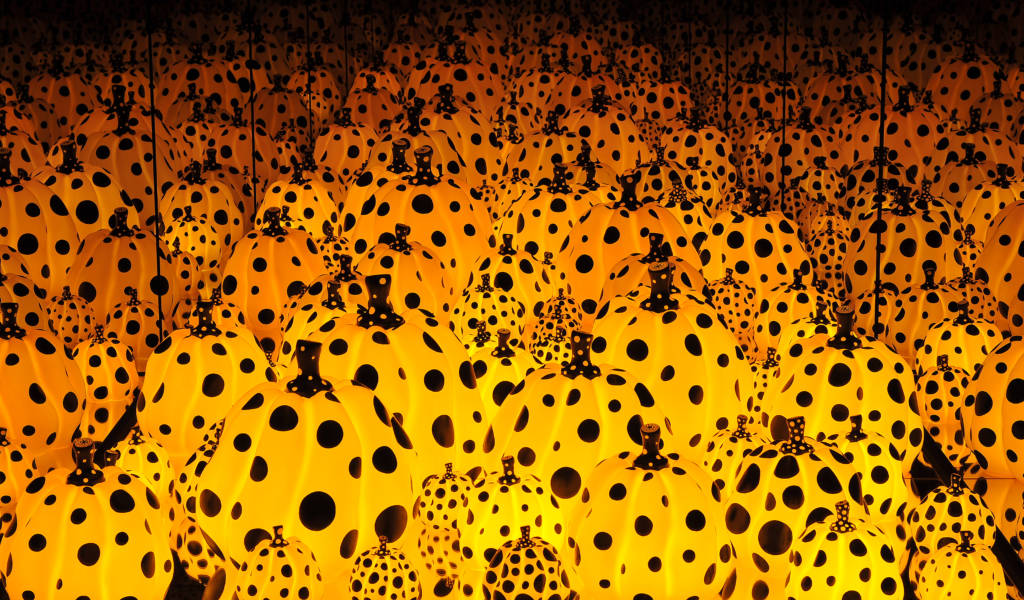 I was lucky enough to spend an afternoon pottering around the Yayoi Kusama Museum, the world’s only permanent gallery dedicated to her work.

The exhibition I attended—Here, Now, I have Reached the Grandest Start of My Life—follows Kusama’s footsteps as an artist, starting with early works from the 1950s and concluding with her more recent fare. Allegedly the most popular artist on the planet (at least in terms of visitor numbers), her galleries worldwide are often packed while they last—so naturally getting tickets can be a pain. More on that later.

Her works are famously fueled by intense visual and auditory hallucinations, which have inspired her remarkable output for more than 70 years. If bold colors, obsessive repetition, an elusive artist and many, many pumpkins sound like your idea of a cultured day out, you’re in the right place.

On the surface there’s not an awful lot to see on the first floor of the Yayoi Kusama Museum, but it’s a nice introduction to the space, with a brief explanation of the gallery printed on the wall in English and Japanese. You’ll also want to grab a program from the reception desk, since none of the pieces are marked in the gallery itself. There’s a small gift shop on this floor, but be warned, some of the prices are not for the faint of heart.

The second floor changes every few months, but when I went featured a showcase of Kusama’s early works. It doesn’t take an art critic to see stark differences in her style throughout her life. Her ‘50s works seems to lack the bright positivity that epitomizes her later style, but you can still see the occasional fields of nets and dots she later became famous for.

The current exhibition showcases botanical-themed works alongside several self-portraits that span from her early days as an artist to present day.

In with the new

The third floor features many of Kusama’s newer works, from her My Eternal Soul collection. If you’ve seen any recent promotional stuff, odds are you’ve seen a couple of these already. Brighter, louder and much, much bigger, there’s a lot to take in from the second you get to the top of the staircase.

The highlight of course, is one of Kusama’s famous infinity rooms, PUMPKINS SCREAMING ABOUT LOVE BEYOND INFINITY. Designed to reflect a small patch of pumpkins seemingly forever, peering into the box is a unique experience. Part of what makes it so jarring is your own lack of reflection in the mirrors, which took me longer than it should have to notice. Free of interference from the outside world, the inside of that box almost feels like it could be another dimension. Fair to say I’m probably missing the point, but the effect is both reflective and technically impressive.

The “library” and rooftop garden

The 5th floor features a (very) small library, with in-depth programs from selected galleries in several languages, as well as a reading area. The rooftop includes one last dazzling pumpkin statue. In the full light of a summer afternoon it really does shine, so if you plan to spend any time up there, shades might be a good call.

As a nice final touch, all the windows are shaded with a subtle matrix of tiny dots, which are cast across your view of the city. And you might just find that image follows you when you leave. Could be I’m just susceptible to suggestion, but I found myself fixating on incidental circles and repeating patterns in the world around me for a good while after leaving!

Waseda isn’t exactly on the tourist trail, but it’s easy enough to get to on the Metro Tozai line. Depending on your route, you’ll probably change either at Takadanobaba, one stop to the west, or Iidabashi, two stops to the east.

Getting tickets to the Yayoi Kusama Museum

The Yayoi Kusama Museum limits its intake to avoid overcrowding, and you are only allowed to stay for 90 minutes. As with many popular Japanese attractions (we’re looking at you, Ghibli Museum), applying for tickets can be an involved process. In this case, the only way to get them is to book online—over two months in advance. Fortunately, the system itself is pretty straightforward, and the site’s English translation is top-notch. New tickets are released at 10am on the first day of each month.

If you don’t fancy waiting in line with the crowds that attend Kusama’s traveling galleries, then visiting this museum is a great opportunity to see her work. The trade-off is that you’ll need to book well in advance—so if you’re only in Tokyo for a few days, you might just be out of luck.

Kusama’s current exhibition, I Want You to Look at My Prospects for the Future: Plants and I, runs until February 28, 2019, and the museum will then be closed for all of March 2019.

While you’re in the area

Fancy a bite to eat before or after your visit? You can’t go wrong with the lunch menu at Ama Waseda, right by the station. The restaurant is Nepalese, but many of the dishes seem to be Thai. Prices start at ¥600, and there’s a ¥100 student discount.

There’s also a branch of the enduring cheapo favourite, Book-Off, on the way back to the station. Swing by if you’re in the market for cheap books or gaming supplies!

Even if you don’t need to go, take a moment to enjoy the bathroom on the second floor.