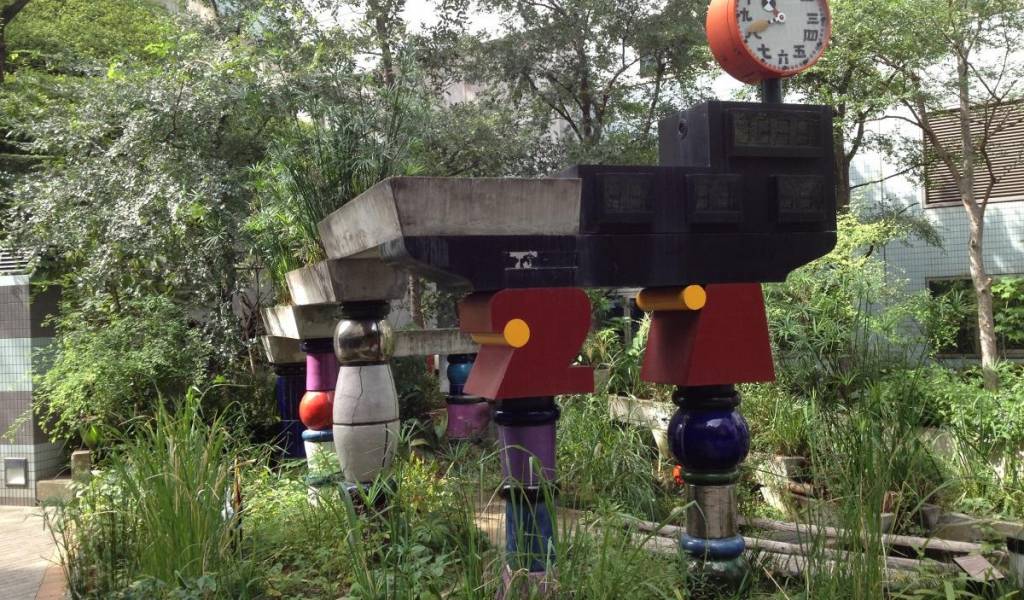 The 10 Best Public Artworks in Tokyo

Beyond dull bronzes of early statesmen, public art in Tokyo is a relatively new phenomenon. Only in about the last 25 years or so have architects and urban planners started to incorporate public artworks into their projects. Luckily, there are a growing number of freely accessible works that are worthy of your attention. So here are our picks for the best 10 in Tokyo – the list has numbers for ease of navigation, but they’re in no particular order of preference.

The digital countdown on this work by Austrian artist Hundertwasser stopped at midnight on January 1st, 2001 – the beginning of this new millennium (not January 1st, 2000!). Since then the conventional clock continues to count time. Dating from 1992, this piece is hidden away behind the shops of Akasaka Dori next to the TBS building. The plaque is a little out of date as it doesn’t mention that Hundertwasser passed away on February 19th, 2000 – before the countdown on his clock had finished. Closest station is Akasaka exit 3b

Taro Okamoto is famous for his surreal, fiery towers and figures – the most well known of which is the giant ‘Tower of the Sun‘ produced for the 1970 world fair in Osaka. ‘Young Clock Tower’ isn’t his most famous work, but it predates Tower of the Sun by 4 years and it’s easily accessible and well sited. Other works by Okamoto in Tokyo are a similar creation outside Children’s Castle in Aoyama and a giant mural in Shibuya Station.

This is an ‘audio kinetic sculpture’ by artist George Rhoads located in Minami Aoyama on the right side of Gaien Higashi Doori midway between Minami Aoyama Itchome Station and Nogizaka Station. When this is in operation it’s mesmerising with balls continuously circulating and flying through the structure. Unfortunately, recently it seems to be switched off a lot more than it’s switched on.

Maman is located on a spectacular site at the base of Roppongi Hills and makes what would be an otherwise unremarkable space moody and interesting. What may surprise long term Tokyo residents is that the giant spider designed by Louise Bourgeois is the art equivalent of a franchise – there are Mamans all over the place. Other permanent locations include Ottawa, Des Moines, London, Bilbao, St. Petersburg, South Korea and Qatar.

The statue on the other side of the station is better known – but it’s a boring bronze of a dog. The Moai on the other hand is much more interesting. How can the placement of a two faced (it has two faces) pseudo Polynesian statue and palm trees in one of the most overtly urban places on the planet not bring a smile to your face?

OK, this isn’t strictly a single work of art but it’s hard to nail down to a single location anyway. As the centres of Tokyo’s youth culture, Shibuya and nearby Harajuku are the main places to see street art. Check the quieter back streets further away from Shibuya Station and away from the main roads in Harajuku. The graffiti has a distinctive manga infused style that you won’t see anywhere else. The image above was snapped in Shibuya 1-chome and I can no longer find it!

This isn’t a single piece of work either – but Naka Dori is kind of special.  This quiet street that runs between expensive boutiques and high rise glass and steel towers is one of the few places in Tokyo where they’ve decided to make public art an integral part of the streetscape. More than a dozen (mainly bronze) works line the street. Boring statues these are not.

The original giant 18-meter-tall robot was originally erected in Odaiba in 2009. It then moved to Shizuoka where it stayed until 2011. In April 2012 it returned to Odaiba. In 2017, it was replaced with a Unicorn Gundam that currently stands at 19.7 meters tall in front of Diver City shopping center near Fuji Television. Closest stations are Daiba on the Yurikamome Line and Tokyo Teleport (unfortunately it’s just a train station) on the JR Rinkai Line.

Every 30 minutes the ceiling of the corridor from the main ticket gates to Exit D of Akasaka-Mitsuke Station is transformed from dull concrete to a starlit sky full of the constellations of the zodiac – except when it doesn’t happen. Information is rather thin about this and when I ventured down there (at lunch time) it wasn’t on. After much questioning of the (very helpful) station staff we determined that it does happen but sometimes it doesn’t – like at 1pm on a Friday. Anyway, you can get some idea from the shaky YouTube video above.