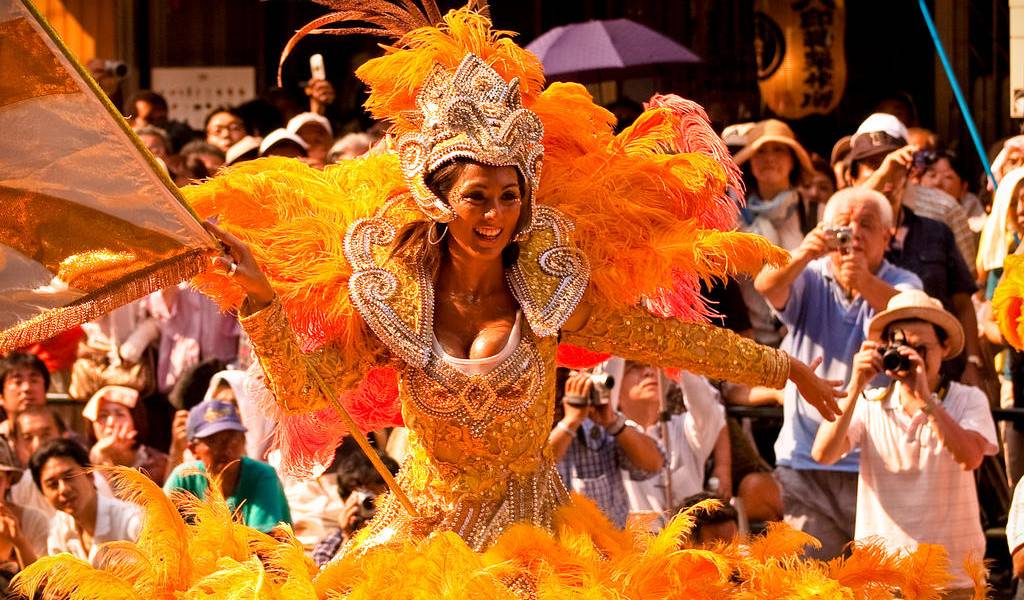 Dance is the theme this weekend – watching rather than doing, unless you’ve been practicing long and hard for one of the three enormous dance centered events this weekend.

If you’re in Asakusa this weekend for the 31st Asakusa Samba Carnival, you are guaranteed to see the most dazzling array of beautiful telephoto lenses that you have ever witnessed – the dancers are quite interesting too! But seriously folks, this has become one of the major summer festivals in Tokyo.  Reflecting Japan’s close ties with Brazil (Brazil has the largest Japanese disapora in the world) the festival sees 18 ‘teams’ compete for the title with samba floats, drummers and of course dancers with tiny costumes and enormous feathered head dresses.  The carnival kicks off at 1:30pm on Saturday, August 25th and should be all over by 6pm.  The parade route follows a dogleg through Asakusa with Asakusa station right in the middle so if you don’t want to be stuck in the crowds, either turn up early or go to Tawaramachi Station on the Ginza Line which is located close to the finishing point of the parade.

The Harajuku/Omotesando area sees another huge team performance dance contest with the Harajuku Omotesando Super Yosakoi festival taking over the area on Saturday the 25th and Sunday the 26th.  The traditional dance festival is on a massive scale and sees 6,000 performers in teams from throughout Japan competing for the top spot.  There will be a parade along the street in front of NHK on both days from 10am until about 6pm and a parade down Omotesando avenue on Sunday from  12 noon until 4pm.  Closest stations are Meijijingumae on the Chiyoda and Fukutoshin Lines, JR Harajuku Station and Yoyogikoen Station on the Chiyoda Line.

Not to be out done by the formidable competition, Koenji has the  56th Koenji Awa Odori Festival this weekend.  If the prospect of spending all day in the heat is too much for you, then this festival is for you.  Everything kicks off as the sun is setting at 5pm and the procession is finished by 8pm – on both days.  Organisers tout 10,000 dancers and musicians and an expected 1 million people turning up to watch.  Closest station is of course JR Koenji on the Chuo Line.

If you prefer feeding your face to moving your feet, there is also the Azabu Juban Noryo (refreshing) Festival. This runs on both Saturday and Sunday from 2pm until 9:30pm.  This festival is renowned for its food  which is a cut above the usual matsuri fare (this is Azabu Juban!).  Despite all the other competing events, it will also attract huge crowds. Closest station is Azabu Juban on the Namboku and Oedo subway lines.