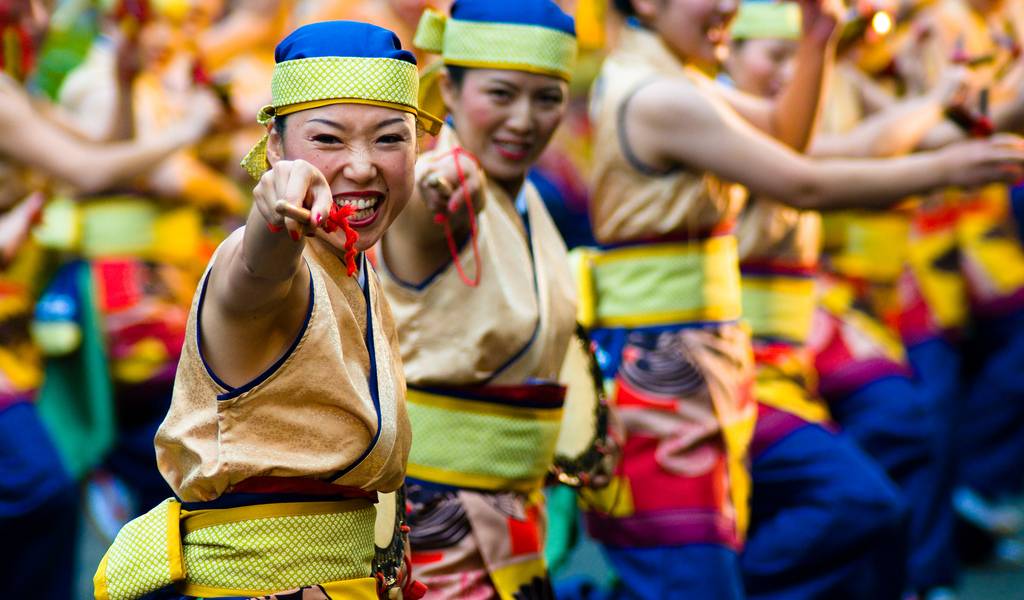 As the “end” of summer approaches, Tokyo explodes with colourful events, and this weekend in particular is a bumper one for cheapos in the capital. Grab your camera and hit the streets to see dance festivals, sample delicacies from all over Japan, and take in two free fireworks displays.

One of the biggest things happening this weekend is the Asakusa Samba Carnival. Gaining immense popularity over the past 33 years to become of Tokyo’s major summer festivals, it’s a chance to experience a bit of Brazil without leaving Japan. You can expect feathers, floats, and a whole lot of samba. Also – huge crowds!

If you’re keen on checking out traditional Japanese dance with modern music and an energetic edge, you’ll want to head to Harajuku for Super Yosakoi 2014. Teams from across the country will be competing on stage and parading through the streets on Saturday and Sunday.

Bon odori and awa odori are more old-school, sedate versions of Japanese dance, and you can catch them at various places this weekend. Hibiya Park will be hosting the Marunouchi Ondo Bon Odori Festival (listen out for the special Marunouchi song), while Koenji’s massively popular (we’re talking a million spectators) Awa Odori Festival will be on too. Roppongi Cheapos (a contradiction in terms?) can put on their dancing …. geta and show off some moves at the Roppongi Hills Bon Dance from Friday to Sunday evening.

You’ll probably be hungry after all of that, so roll down to the fashionable (read: rich) area of Azabu-Juban for the Noryo Festival – a chance to try famous dishes from different prefectures, as well as the usual summer festival fare. Yes, that means the legendary stuff on sticks.

Tokyo’s fireworks season is winding down, but you still have a chance to don your yukata and see a couple of shows. Saturday’s Tamagawa Fireworks Festival is super good and super crowded (the amount of standing space per person is actually stipulated, that’s how packed it gets), but the Chofu City Fireworks Festival on Sunday is also worthwhile. In fact, with a decent 8 000 fireworks but just 35 000 people, it’s probably a more relaxing option.