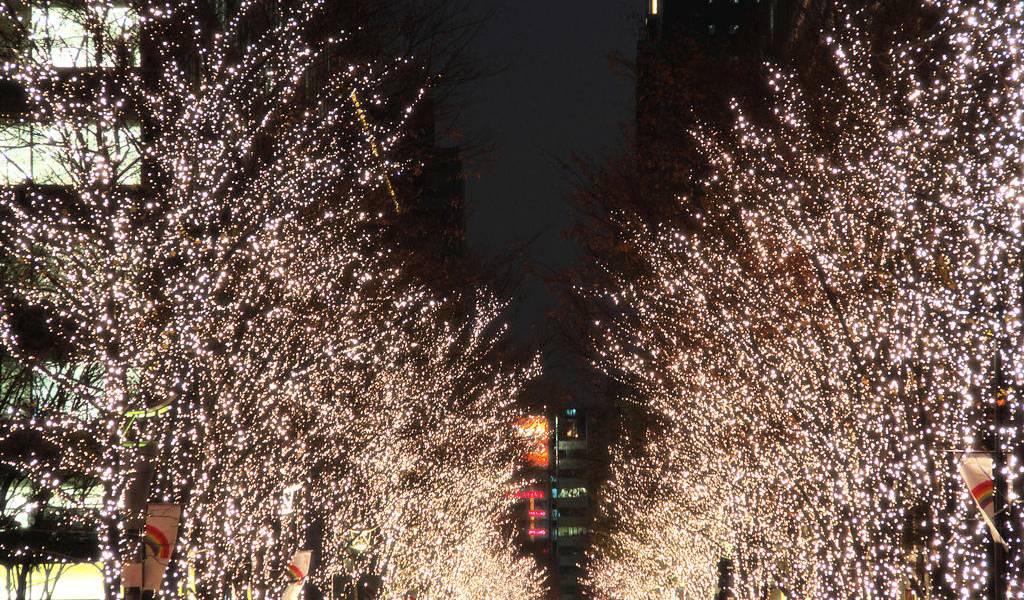 Did you know it’s Christmas? Just as Halloween runs for the whole of October in Japan, Christmas seems to run from about November 1st until the end of January. Aside from the Christmas jingles already playing at your local shops, the other way you know it’s Christmas is because of the illuminations which start around this time of year all over Tokyo.  While a lot of these illuminations just involve putting up a large Christmas tree, some shopping districts go all out to attract shoppers and tourists. Areas that will have trees and buildings strung with fairy lights this weekend include Marunouchi and Ginza.  The Marunouchi ‘light-up’ features 1 million low energy bulbs and has actually been going since October 1st.  Ginza’s illumination begins this weekend coinciding with the unveiling of the iconic Christmas tree outside jewelry maker Mikimoto’s main store on Chuo Dori this Saturday. Closest stations are Yurakucho/Hibiya for the Marunouchi light-up and Ginza Station for the Ginza show.  Both are within close walking distance so you could knock off both in one fell swoop.

Continuing the design theme from last week in a slightly different vein, Design Festa No. 36 is on this weekend at Tokyo Big Sight – one of the number of enormous buildings in Odaiba that looks like an alien landing craft.  With 3,000 booths and 10,000 exhibitors, the organisers claim it is the largest art event in Asia if not the world.  Entry at 800yen for pre-purchased tickets) is a little steeper than it should be especially considering that they charge the exhibitors as well.  However, there is at least a day’s worth of entertainment – including two stages of live music as well as continuous drama, performances, dance and movies shown in the ‘Theatre Space’.  The event runs from 11am to 7pm on both Saturday the 10th and Sunday the 11th.  Closest stations are Kokusai Tenjijo on the Yurikamome Line and Tokyo Teleport on the JR Rinkai Line.