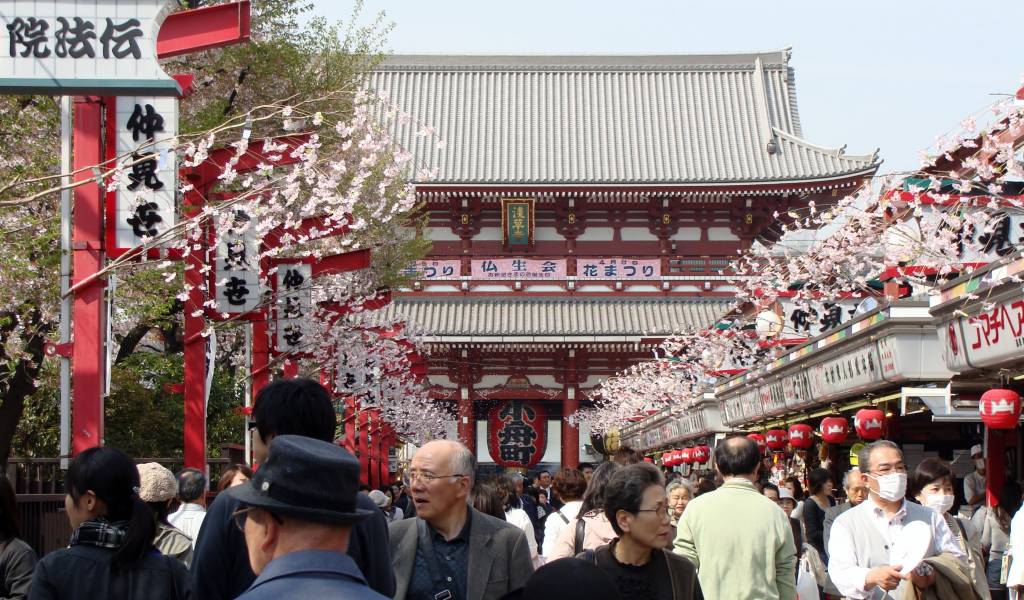 Buddha’s birthday is not as big a thing for Buddhists as Christmas is for Christians (and many non-Christians as well)—but it is a big thing for Buddhist temples in Japan. Besides the obvious reason (i.e. the birth of the religion’s founder/central figure), Japanese temples are businesses, so they try to organize as many big events as possible to keep their followers (not to mention as many visitors as possible) coming. Contrary to other countries, Japanese Buddhists celebrate this day on April 8, which is very close to the cherry blossom season—and with the spring well on its way the name Hana Matsuri or “flower festival” is rather appropriate.

Various events are staged in the majority of Buddhist temples (nearly all sects agree on the date) but as is often the case, the bigger the temple, the more impressive the event. At Asakusa’s Sensoji, Hana Matsuri involves a change in the temple’s main altar’s tapestry, a separate altar with a statue of Buddha outside the temple where people go to lay flowers in front of and pour amacha (a sweet herbal tea made from hydrangeas) over the new-born Buddha and a chariot with a quite sizeable white elephant making the rounds; the white elephant was part of a dream the Buddha’s mother saw the night she conceived him and often symbolizes the big man himself.

Unlike other Japanese festivals, Hana Matsuri is a rather quiet event; in smaller temples where crowds are thinner you might even miss it. But it is a special day, you can buy amulets or other religious trinkets (temples are businesses, remember?) that are only sold there and then—and together with the flowers and the (usually) good weather it can make your standard temple-hopping a little more interesting.

If you happen to be in Asakusa, drop by Sensoji for celebrations—there’s also free tea for all visitors at a small tea shop next to the Hozomon Gate. Don’t worry if you’re not in that area though, any temple will do (but if you go for the big ones though, get there early because of the ubiquitous crowds).

Just remember: this is a Buddhist holiday so avoid the temples with the big “Π”-shaped gate (torii)—these are Shinto shrines and for them April 8 is just another day!

Open with Maps
Written by: Grigoris Miliaresis
Filed under: Holidays | Japanese Culture And Tradition
Tags:
Sharing
Questions or comments about this article?
Start a thread on our community forum
Ask our local experts about Tokyo