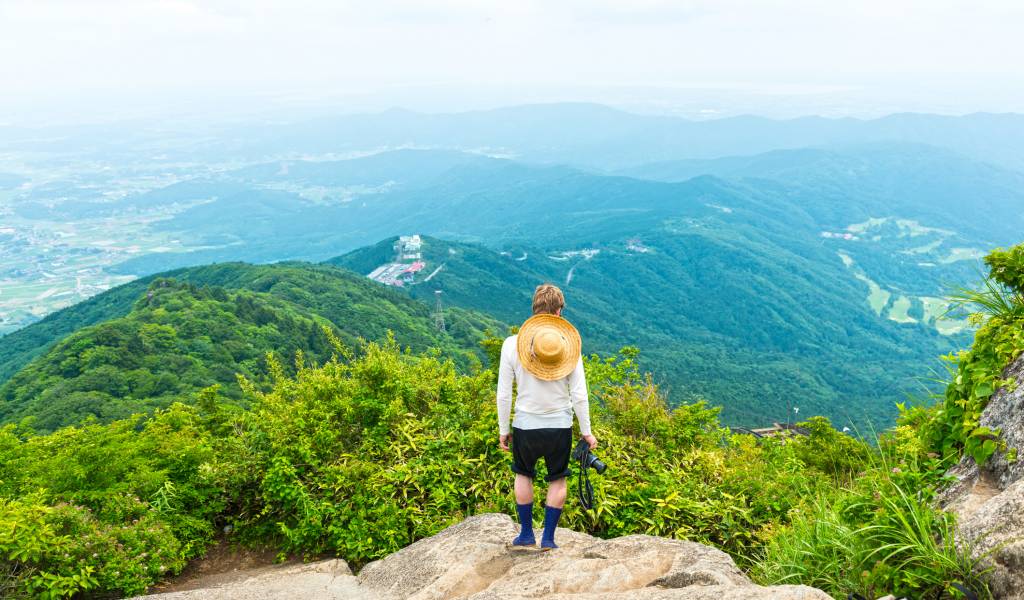 Mount Tsukuba: A Stunning Day Trip Outside of Tokyo

Mount Tsukuba is a gorgeous double peaked mountain in the Ibaraki Prefecture. At only 877 meters tall, Tsukuba-san is a much easier, relaxing, and less crowded alternative to the ever popular Mt. Fuji. On a clear day, you can see a panoramic view of the entire Kanto plain, the skyline of Tokyo, and Mt. Fuji. On a cloudy day, you can still get a pretty killer view of the surrounding nature.

The Hilarious History of Mt. Tsukuba (and Mt. Fuji)

As a result, Mt. Fuji is cold, barren, steep, and miserable and Mt. Tsukuba is lush, colorful, and can be climbed (mostly) year round (I’ve climbed both mountains, so I’m allowed to make fun of them). Mt. Tsukuba is my favorite mountain in Japan so far.

The bitter rivalry between the two mountains is adorable (by slightly one sided, since Mt. Tsukuba has all sorts of anti-Mt. Fuji propaganda and Mt. Fuji is mostly just busy being freakishly crowded with people who want to climb the new World Heritage Site before it erupts or something).

Other highlights include the creepy old amusement park at the base of the mountain (pictured above). It is perfect if you want to give yourself or someone you love nightmares.

The only downsides of Mt. Fuji relate to the flora and fauna. It’s great the mountain is so lush, but lush also means large buds, high levels of humidity, and mosquitos the size of 100 yen coins. Make sure to bring a rag to wipe your sweat and extra bug spray, for when you inevitably sweat off the coatings from the morning.

The top of the mountain has a lovely view, along with a couple restaurants, some gift shops, a rock formation in the shape of a frog’s mouth that will give you luck if you toss a rock inside, and a ropeway station. Because of the steepness of the mountain, it is common to climb up to the top of Mt. Tsukuba using any of the paths, and then take the ropeway down. Climbing down Mt. Tsukuba is difficult, especially in the autumn and spring months, when the rocks are covered with mud.

Also, make sure to check out the Tsukuba shrine and Onsen, while you’re at the mountain.

Your best bet is to take the Tsukuba Express to Tsukuba Station. From there, a well marked (and comfortable) bus will take you to two points on the mountain, for 700 yen each way. Busses leave every hour, click here for a timetable.

Mount Tsukuba / 筑波山
Free (bus is 700 yen each way)
728 Tsukuba, Ibaraki Prefecture, 300-4352
Website
029 - 866 - 0321
Written by: Grace Buchele Mineta
Filed under: Things to do
Tags:
Sharing
Questions or comments about this article?
Start a thread on our community forum
Ask our local experts about Tokyo