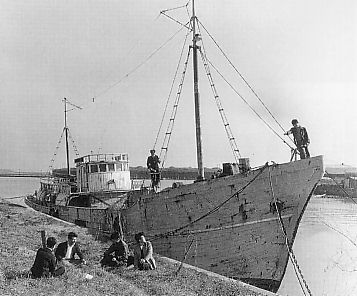 The Lucky Dragon No. 5: A Quiet H-Bomb Survivor

The shell of history’s unluckiest boat, the Daigo Fukuryu Maru, is housed in a special exhibition hall in Yumenoshima Park in Tokyo’s Koto Ward.

The Titanic hit an iceberg it could have avoided. The Lusitania was sunk by torpedos during a war. The Costa Concordia was the victim of a series of unfortunate oversights. And nobody knows what the hell happened to the Waratah, but it probably sank. But the prize, if it is a prize, for sheer bad luck and cosmic unfairness must go to the Japanese tuna-fishing vessel, known in English as the Lucky Dragon No. 5, which was caught in atomic fallout near Bikini Atoll in 1954.

On March 1, 1954, the United States conducted the Castle Bravo nuclear test on Bikini Atoll, detonating the SHRIMP device at 06:45. The explosion generated a mushroom cloud 8.9 miles high, a fireball 4.5 miles wide, and a crater 6500 feet wide. It was visible 250 miles away. The fifth most powerful nuclear explosion in history, the Castle Bravo test yielded 15 megatons of explosive power, a thousand times more than the bombs dropped on Hiroshima and Nagasaki. It was also, thanks to a calculation error in the lab, twice as powerful as the US had expected it to be.

The Daigo Fukuryu Maru shouldn’t have been near Bikini Atoll at all. Having lost a number of their fishing lines on coral reefs near Midway Atoll, the boat headed south towards the Marshall Islands, hoping for better fishing there. Even so, they should have been safe; as far as the captain and crew knew, they were outside the fallout radius danger zone that the US’s Atomic Energy Commission (AEC) had announced in October 1953. The Daigo is a small boat: 81 feet long, 140 tons, and wooden. None of the recon planes in the area even knew it was there. (There were at least 100 other small boats in the area at the time.)

Within minutes of the explosion, they realized that something was wrong. If nothing else, the sun doesn’t usually rise in the west. The crew decided to get the hell away from the area.

Within two hours, radioactive coral ash began sifting down from the sky. The crew called it shi no hai, death ash, and tried to get their 300-feet-long lines reeled in as quickly as possible. They started feeling sick the next day and set course for home, arriving at Yaizu, Shizuoka, on 14 March. The catch was offloaded and sold. The crew, suffering from headaches, bleeding gums, burns and nausea, reported to hospital.

Dr. Yasushi Nishiwaki, realizing he was dealing with acute radiation sickness, immediately contacted the AEC for help, but they wouldn’t tell him what the composition of the fallout was. Meanwhile, investigators scrambled to find and recall the radioactive fish from the Daigo’s hold, which had already contaminated tons and tons of other fish as it passed through Japanese markets. The price of fish dropped through the floor. The head of the AEC, in a fit of unhelpfulness, announced that the boat had actually been inside the danger zone and therefore had only itself to blame. When that failed, he suggested that the 23 fishermen currently feeling very ill indeed were all Soviet spies.

Unsurprisingly, this went down like a meat pie at a vegan potluck, and the Japanese antinuclear movement ramped up the protest against nuclear weapons. On 23 September 1954, crewman Aikichi Kuboyama died of complications from the radiation sickness treatment, leaving a wife and children. The other 22 survived, and were granted hibakusha status. Godzilla was released on 3 November 1954. The first World Conference against Atomic and Hydrogen Bombs was held in Hiroshima in August 1955.

The Daigo was purchased by Tokyo University, then refitted as a training vessel in 1956, taking to the seas once again as the Hayabusa Maru. Years later, just as it was about to be scrapped, it was saved by the Governor of Tokyo and moved to its current location in the Tokyo Metropolitan Daigo Fukuryū Maru Exhibition Hall in Yumenoshima Park, opening to the public in 1976.

Today, you can see it on any day except Mondays. The park is a short walk from Shin Kiba Station, on the JR Keiyo Line and the Yurakucho Subway Line. Admission is free, and all information panels are in English as well as Japanese. Exhibits include the ship itself, information on H-bomb damage, the health challenges of the ship’s crew, the “atomic tuna” debacle, and the Japanese anti-nuclear movement.

For you history lovers out there, check out: Why This Isn’t Kyoto Cheapo (Or, a Free History of Edo, Part 1)