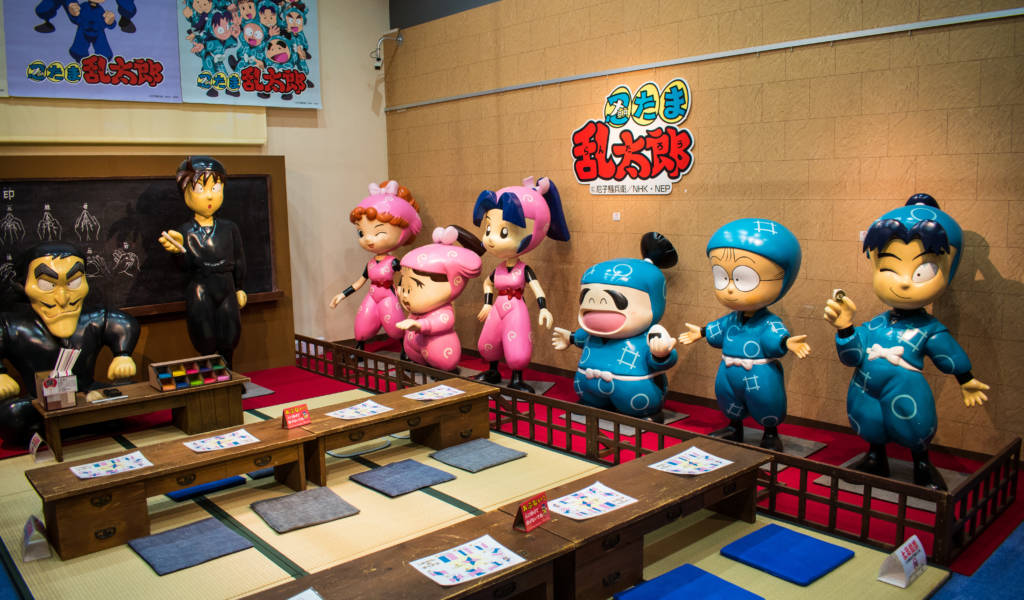 Before Akihabara, there was Suginami, the real original center for Japanese geekdom.

From the outside, the neighborhood of Ogikubo in Suginami doesn’t have the hallmarks of a Tokyo tourist destination. The streets are populated by local folk getting on with their day, and beyond the generic chain stores dotted around the station it looks like any other suburban pocket. However, Suginami is one of Japan’s most important artistic and cultural destinations. It’s the nation’s home of anime, and at the Tokyo Polytechnic University Suginami Animation Museum (or Suginami Animation Museum, for short) is where you can learn all about it.

Cartoons are seriously big business in Japan. According to a document released by the Japan External Trade Organization, the nation is responsible for around 60% of all anime TV programs films released worldwide. There are 130 anime-centric voice acting schools located throughout the country too. It’s an industry that in 2017 was worth 2.2 trillion yen (USD $20 billion). It’s one of the nation’s most iconic exports, and in Tokyo alone there are 542 anime studios. These studios are responsible for writing, editing, drawing, and producing a large portion of the world’s cartoons.

Even if you’re not well versed in the world of anime or manga, it’s still worth putting some time aside to learn a little about it. It’s an integral element of the nation’s identity. Not learning anything about the form is almost like the cultural equivalent of visiting Japan and not eating ramen or sushi.

Forget Akihabara, Suginami is the true anime capital of Tokyo

So, now that you’re feeling obliged to try and fit in a crash course in anime, chances are the first place that comes up on the Google search is Akihabara. While it’s known for being the home of geekdom, it’s far from Japan’s anime capital. In fact, of the 542 anime studios in Tokyo, only four are located within the boundaries of Akihabara’s ward Taito.

The real heart of Japanese anime is Suginami, a ward nestled next to Nakano, and just west of Shinjuku. The leafy, residential neighborhood is home to a staggering 138 anime studios, just topping its northern neighbor of Nerima which has 103. It’s one of the many facts you can learn about the art form over at Suginami Animation Museum.

“The museum was founded by Suginami ward in 2004 in recognition of the area’s incredible anime community,” explains Fujita Teru, one of the main staff at Suginami’s Animation Museum. It’s the first museum of its kind. The innovative and interactive space details the evolution of animation culture in Japan, with a focus on the local scene.

“The first production studios were in Nerima,” Fujita explains, “but Suginami was the closest neighboring ward, so it was easy for directors, producers, authors, and assistants to work together.”

The permanent museum display occupies just one floor, while there’s an additional cinema floor that hosts rotating exhibits, and a library of anime films that’s open to the public. At first, it may not seem like a lot of space to dedicate to a topic so far-reaching, the museum maintains the perfect balance of being both comprehensive and compact.

As you enter the museum, by the front desk you’ll find a chronological table display on the history of Japan’s animation, starting in the year 1917.

The museum also provides multilingual audio guides (English, Chinese, Korean, French) with an interactive map and pen. You can simply touch the numbers listed on the map to learn more about a specific display.

The most appealing part of the museum is, without doubt, its interactivity. While the displays are impressive enough for those uninitiated into the world of anime, it’s the interactive element that’ll hook you in.

In the far corner of the museum sits a semi-isolated sound booth. Here you can step into the shoes of Makoto Tsumura and voice clips from Astro Boy. Or if you’re microphone shy add the pre-composed sound effects.

“We think the museum is great for people who don’t know about anime because there are plenty of activities for people to experience,” says Fujita. “You can learn how to make animation; it’s not just looking at famous characters.”

One of the most exciting hands-on activities is the DIY animation studio. Known in Japanese as para-para, it’s like a more advanced, digitized version of a flipbook you may have made while in art class at school. There are templates to trace, or if you’re feeling inspired, you can always create your own original characters. Once you’ve filled in enough panels to create a moving story, you can use the photo machine to turn it into a real living film.

The museum runs regular workshops on how to create a para-para animation, which is only in Japanese but easy enough to follow along. They also occasionally run other animation workshops, focusing on other forms of animation, like clay animation. The workshops are typically held on weekends, around four times a month, but dates do change so check the official site (linked below) for more info.

One floor above the main exhibit is where you’ll find the special exhibit, cinema and library. Every few months the special exhibit and cinema focus on a different anime production, hosting displays and running clips from the series in focus. Next to the cinema is a cozy library stocked with anime and manga from all over the world, and of all different languages.

Once you’re done exploring the museum, be sure to stop by Inazuma Cafe. It’s a cafe that proves to be geeky and stylish are not two mutually exclusive qualities.

It’s just a short walk from Ogikubo Station, down the northern end of the charming Ome Kaido avenue. The walls of this laidback, minimalistic cafe are covered with artistic scrawlings by the best in the anime business.

You could easily while away hours trying to count all your favorite faces. It’s a loving dedication to the talents that make Suginami ward one of the most exciting local neighborhoods.

The cafe serves excellent espresso coffees, sweets, and a Western-inspired menu of comfort dishes like spaghetti, pizza, fried chicken, and omu-rice. Pets are welcome too!

If that’s not enough anime obsession, then you can always explore the wider anime kingdom that surrounds Suginami. Where to begin? According to Fujita, “Suginami is known as an anime place. But Toshima is Tokyo’s home to manga, while Nakano is known for its subculture, and Nerima is more traditional old school.”

How to get to the Suginami Animation Museum

Alternatively, you can take the Kanto bus going to any destination from the No. 0 or No. 1 bus stops at the north exit of Ogikubo Station. Hop off at Ogikubo Keisatsusho-mae (Ogikubo Police Station)—from there it’s less than a two-minute walk.

The museum is located on the third and fourth floors of the Tokyo Suganami Kaikan building.