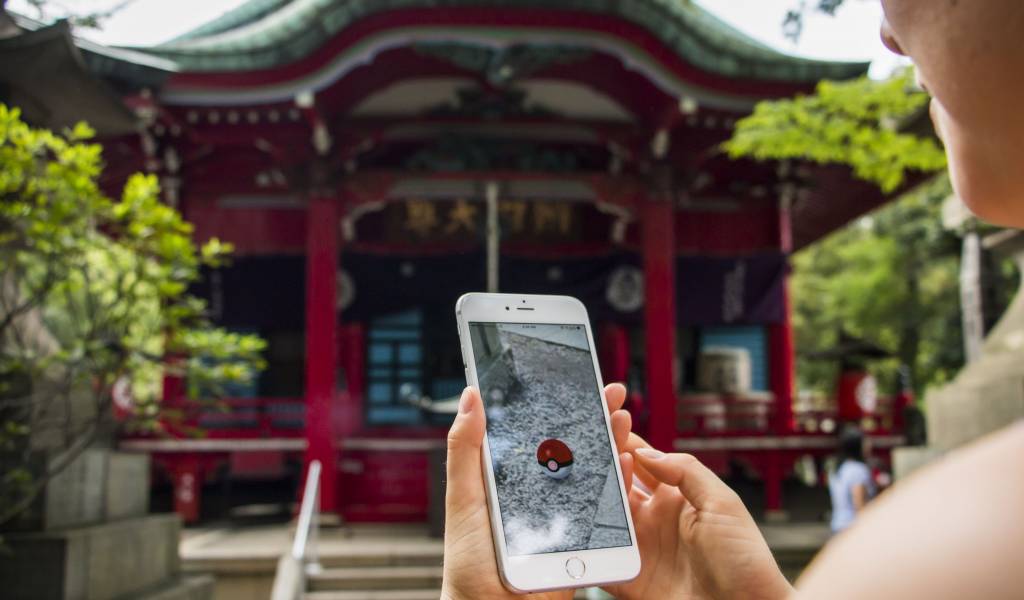 When Pokémon Go was finally released onto the streets of Tokyo, it came with numerous warnings and guides, but most importantly: unbridled, unashamed, childhood joy. From salarymen to pensioners to couples (and not to mention kids) the city is a sea of phones held aloft, ready for swiping and scanning the horizons for new catches. With Poké-stops being  placed in strategic locations across town, we headed to three and decided to ask a few people how the new-age gaming was going!

We started our trainer-tour in the lovely gardens of Inokashira park, a few days after the release of the game, uncertain if there would be a lot of people around…but oh were we wrong. With a rather picturesque Poké-stop and plenty of wild water Pokémon to be caught, the park was awash with couples and groups enjoying the sun (as it reflected off their phone screens).

Only yards into the park we met Rui, a local from Kichijoji who was more than happy to pause for a chat.

“I only just started playing. I came here to try and find some! I didn’t really play much before, but I like it so far.”

The park showed there was no age limit to playing either… we didn’t manage to have a chat with this gentleman unfortunately—but would totally adopt as a granddad.

We also noticed pretty quickly there were a lot of cute couples on Poké-dates (and some reluctant partners being dragged around as well). We witnessed no (obvious) fights and it seemed like a pretty lovely way to spend a Sunday afternoon!

Shunsuke: “We saw how popular it was in America and thought it would be fun to try. I was never really into it but I am now!”

Our favorite couple of the day didn’t have any trainer tips for us, but on our way along the path we hailed a slightly-distracted cyclist and asked about any info on how to incubate those eggs… He informed us (very seriously) that you can incubate on a bike if you travel under 10km, any faster though and it doesn’t count. Now, we aren’t saying you should cycle and play…but since the screen dims but remains active when facing down, this could be a great way to hatch those critters…

Whilst wandering we couldn’t help but notice these two friends and had to stop to ask for some tips!

“We played on Game Boys in elementary school so it’s very nostalgic. It was popular in the US so we were really excited and had to wait for ages for it come to Japan.

Hat source?: “We were playing in Akihabara yesterday and they just gave them to us!”

Top Pokémon Catch: A Hakuriyu (Dragonair) and a Starmie.

Whilst taking a casual swan boat around the lake, we notice a large amount of our fellow boaters were also a little distracted…

We swanned over to some of them for a younger-viewpoint:

“We used to play with the cards and on Game Boys. We were really excited for the game, today we caught an Ebiwara (hitmonchan) here and we haven’t seen it anywhere else yet.”

Roppongi – Skateboards and cemeteries for the ghostly Pokémon…

“I’ve been playing for a week in the US and since it was released in Japan. So far my best is a Gyrados I evolved from like 100 magikarps. My neighborhood is known for water Pokémon like Cerulean City in the Pokemon story itself. You can catch tonnes of Magikarps there but it takes dedication”

Most unusual Pokémon: “I caught an Ivysaur in a supermarket the other day!”

Why do you like Pokémon Go? ” I love how it encourages all players to go out and explore. It’s a healthy habit. This weekend I spent 3/4 of my time outside, walking, skateboarding, (of course to incubate my eggs!) and search for Pokémon. I played it when it first came out in Game Boy so I’ve been a fan for a long time.”

Trainer Tips: “I’m a casual trainer! Team Valor! I don’t really follow any rules to be honest. I think you should do you, no matter which team you are in, play it with harmony and play for fun, whatever fun means to you. Now go catch em all!”

Next was Jorge (right), who has been a dedicated player from… well, the word Go!

“I went down to Ikebukuro, they’re playing the music out of speakers, there’s a lot of people down there. We play at work in Roppongi, it’s opposite a cemetery so there are quite a few ghost Pokémon. They put the Poke-stops in some tactical places and the businesses are using it too.”

Trainer Tips: “When you are on the train( not subway) hit Pokémon spots 1 second before you arrive in order to pick them up, if you wait more you will loose them. Catch and evolve every Pokémon you can for extra exp. Don’t get attached to any Pokémon as there’s a chance you might catch a better one in the future, therefor choose wisely before training a Pokémon.”

Best thing about the game?: “I’ve been exploring a lot, even just my area, I found a whole park I didn’t even know was there, and I play it with my wife, which is nice”.

Now, feeling a little more on top of the Pokémon game, having spoken to a few locals, I headed to a hotspot as promised by Jorge: the Ikebukuro Pokémon Center. As it houses both a Poké-stop and a gym, it was indeed filled and surrounded by people staring intently at their phones (Most of whom politely moved thinking I was trying to take a picture of the sign…).  I awakened a few to ask how it was going:

Trainer Tips: “We’ve been playing it quite a lot—trains are great but you have to be on the ball. When you go in and out of stations, before it speeds up, it counts for incubating. When you stop at stations you can catch Pokémon there, but only if you’re fast! We also noticed that if you use wifi and not data, your location is a bit vaguer sometimes, and it lets you access more things even if you’re actually further away!”

Alex: “I only have wifi so it’s a bit limited, but here has been really good. I like how much you explore without realizing, and you go ways you might not have done before”

Christian: “I don’t really play it but it means I can talk about it with all my friends at home who are really into it. I did feel a bit like I had to play it because I was here and it was everywhere. I used to play on Game Boy, Pokémon Blue and Red! I think I will actually keep playing once I get home”

Things were a little more intense as it got darker…

Pokémon took over the streets and no one was safe…I headed home.

So, from pensioners to school kids, cute couples and best friends—when it comes to demographics, Pokémon Go has certainly managed to catch em all! (genuinely sorry for that but it had to be done).  Whether you’re a long-term resident, a tourist or on business, it’s a great way to wander around Tokyo and see things you might never have seen (just watch out for the cars…) and despite its solitary reputation, we found it was a great way to get chatting to people—so make the most of it!

Bikes and skateboards make great incubators (under 10km), Ueno park is the place to visit and trains can be handy pick-up spots too (if you’re fast!).

Written by: Lily Crossley-Baxter
Lily's Tokyo favorites are: Shirohige Cream Puff Factory, Anata No Warehouse, Todoroki Valley
Filed under: Anime And Gaming | Outdoors and Nature
Tags:
Sharing
Questions or comments about this article?
Start a thread on our community forum
Ask our local experts about Tokyo