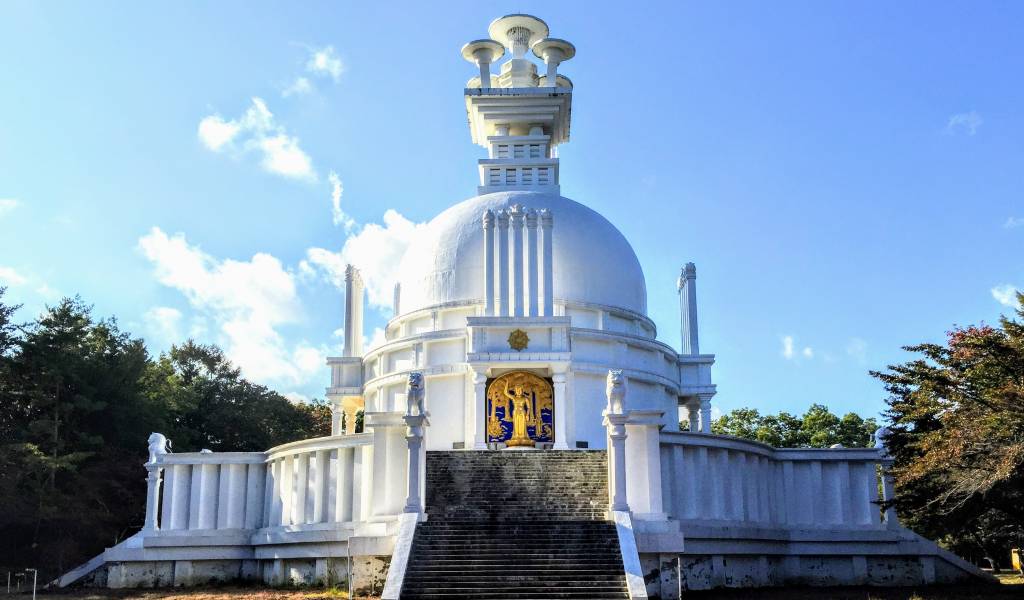 Discover an Indian World Peace Stupa on the Tip of Tokyo

Did you know Tokyo has a rural side? Yep. The Tokyo Metropolis extends westward kilometers and kilometers into the mountains. Tokyo’s largest municipality in area is also its smallest in population: Okutama Town is a way to get out of Tokyo without actually leaving Tokyo.

Out there, on the furthest tip of the Eastern Capital, a gem is hiding. 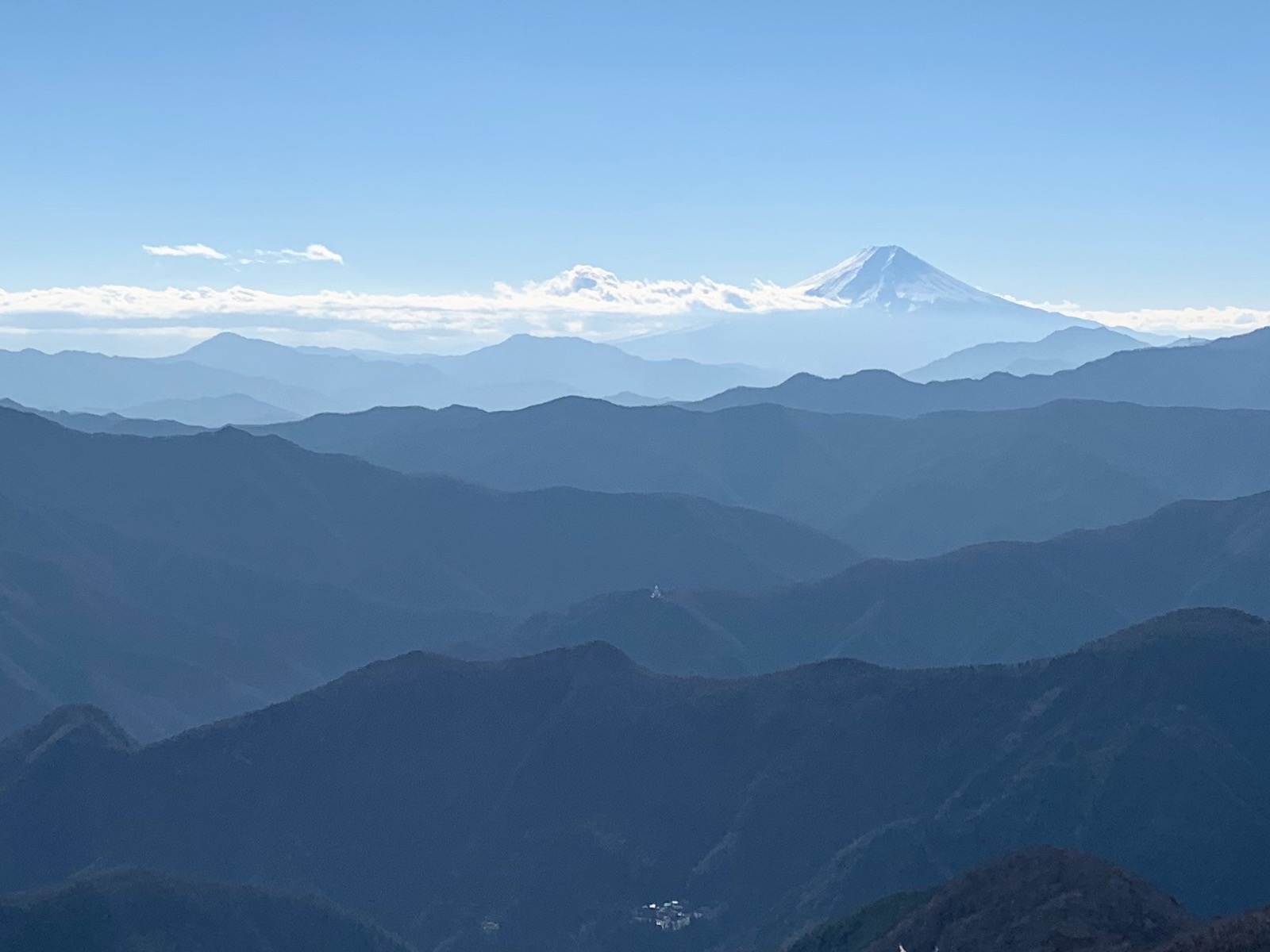 Atop an otherwise insignificant mountain bordering Yamanashi Prefecture at the mouth of Lake Okutama—the middle of nowhere essentially—there’s a huge, white, Buddhist stupa with Indian-looking architecture. After a steep hour-and-a-half hike, this deserted Taj Mahal is quite a sight.

I’ve never seen anything like it in Japan. It’s not like a shrine and it’s not like a temple or a tiered pagoda. It’s a rotunda, with four grand staircases leading up the outer wall on each side. Two lion-dogs (komainu) guard either side of each staircase, totaling eight altogether. (This seems to be the only recognizably Japanese feature.)

At the top of each landing is a large gold Buddha image in various poses behind rusty saisen offering chests and incense receptacles.

You can walk all the way around the halfway landing.

Above each Buddha statue is a dharma wheel and five pillars supporting lotus flowers. The roof forms a dome, atop of which five more spires with disc tops extend heavenward.

It looks like it could be a functional building with spacious room inside, but in fact it’s just a monument with no door. The paint is chipped and peeling.

It stands on a flat clearing with benches to enjoy the view.

The surrounding area on the opposite side is strewn with junk, for forest maintenance or leftover from construction.

The area’s lack of upkeep and quasi-abandonment evokes the characteristic feeling the Japanese call wabi-sabi (the beauty of decay) and haikyo (the hobby of exploring and photographing abandoned places). But it is still spectacular and mysterious in its solitude. There are too many mountains in the way to see the city, but the top offers views of Lake Okutama, the surrounding forests and mountains.

Likewise, if you know where to look from the lake, you can catch glimpses of the stupa poking above the trees.

From India, to Japan, to World Peace

So what is this building? When was it built? What is it for? Why the Indian style? Why was it built here of all places?

In 1917 the monk Nichidatsu Fuji founded the Nichiren Buddhist organization Nipponzan-Myōhōji. He traveled to India in the 1930s and was inspired by meeting with Gandhi. Throughout World War II, Fuji openly preached pacifism in Japan at great personal risk. Further disturbed by suffering caused by the atomic bombs dropped on Hiroshima and Nagasaki, he started the Peace Pagoda project after the war.

In the 1950s, the first pagoda was constructed under his direction in Kushiro, Hokkaido, chosen for its location because of its proximity to the Soviet Union. The project went on to build peace pagodas in places like Hiroshima, Nagasaki, and India, as symbols of world peace and the anti-nuclear movement. The project continued to spread, and now there are over 80 stupas throughout Japan and around the world in Asia, Europe, and North America.

The pagoda in Okutama has an interesting story itself.

The design is based on the Stupa of Amaravathi in South India built by Ashoka the Great, emperor of India in the 3rd Century BC. The stupa was mostly destroyed in the 19th century AD, but the original foundation remains, and relief engravings that covered the stupa have been excavated from the site. One of these reliefs depicted the design of the stupa itself. With this handy ancient blueprint, modern architects were able to reconstruct it.

Commissioned by Nipponzan-Myōhōji, the stupa was reconstructed in the early 70s simultaneously in Okutama and in Dhauli, India. The site of Dhauli is significant because it is where Ashoka laid down his weapons and converted to Buddhism after a bloody war. It is said Ashoka built 84,000 stupas in and around India.

The twin stupa in India, known as the Dhauli Shanti Stupa, is not as remote as its Tokyo counterpart, and features an elaborate techno light show on the building’s surface, depicting the story of Ashoka’s awakening.

The Tokyo Okutama Busshari Stupa, also known as The Imperial Capital Busshari Stupa or Tokyo Peace Pagoda, stands on top of the aptly named Ōdera Mountain 大寺山, literally ‘Big Temple Mountain.’ In fact, this name predates the stupa, as it is said to have been built on the site of another temple from long ago. However, no remains of the former temple were found during the construction of the stupa’s foundation.

Busshari means “Buddha’s bones” and refers to the practice of enshrining literal or symbolic relics belonging to the Buddha, especially crematorial remains such as a tooth or part of a bone. In India, this usually occurs in stupas, whereas in Japan it is usually pagoda towers. These function as places of pilgrimage and meditation.

The information board explains more (translated and paraphrased):

The Buddha preached, “Widely memorialize my remains.” The Great Saint Nichiren also said, “Those who chant the mantra ‘Nam-Myoho-Renge-Kyo’ are like a pagoda, a treasure tower.”

The Great Saint Nichidatsu received these teachings and desired the well-being of all sentient beings. The Tokyo-Okutama Busshari Stupa was built to enshrine the Buddha’s remains and pray for world peace.

We received a congratulatory message from the governor of Tokyo, Ryokichi Minobe, on August 1, 1974. And we had a big convention at the completion celebration with ambassadors from around the world.

Tokyo-Okutama Busshari Stupa is located at the top of Oodera Mountain more than 1,000 meters above sea level. The lake water you can see below your eye is an important water source for 10 million Tokyo citizens. The Buddha’s compassion enshrined in the Tokyo-Okutama Busshari Stupa will spill into this water source, feeding the lives of 10 million people. It will be an important source of nourishment for the hearts and minds of these people, establishing the correct teaching for peace of the land and, we pray, lead to the realization of Word Peace.

The stupa is 50 meters in diameter and 36 meters (~118 feet) tall. All construction work was made by only 4-5 pupils over 2 years. When construction began, there was no road, so all the machinery and materials were flown in by helicopter. The cost of construction was 150 million yen, paid for entirely by donations from adherents.

The discs at the top are “umbrellas” to protect from the Indian heat.

The trail is a short length, only a couple kilometers or so. However the steep incline and elevation gain of about 400 meters makes it a bit of a challenge. Plan to take 1 – 1.5 hours up and less than an hour down. After some switchbacks, the trail follows the ridgeline most of the way up.

If you go later in the year, you might see mushrooms of crazy shape, size, and color, like coral!

About three quarters of the way, there is a clearing with a view of the adjacent mountain face, a vertical wall of sheer trees. This is a good spot to take a break since the last quarter is the steepest part of the trail.

Take the JR Ome line to Okutama Station, the end of the line. Then the Nishi-Tokyo Bus 西東京バス toward Kosuge-no-Yu小菅の湯. Get off at Jinya (陣屋) bus stop. (580 yen, about 35 minutes one-way.)

There is also a small parking area at the bus stop (free).

The bus stop is at a soba restaurant with the same name.

The trailhead is just behind the restaurant.

Go left here, up the tires, and you are on the trail!

Although it takes a while to reach the trailhead, the hike itself isn’t too long, so it’s great for a day trip from central Tokyo. And of course, besides transportation to get there, it’s absolutely free.

Open with Maps
Tokyo Peace Pagoda
Okutama
Written by: James Hanlon
Filed under: Outdoors and Nature | Sightseeing
Tags:
Sharing
Questions or comments about this article?
Start a thread on our community forum
Ask our local experts about Tokyo