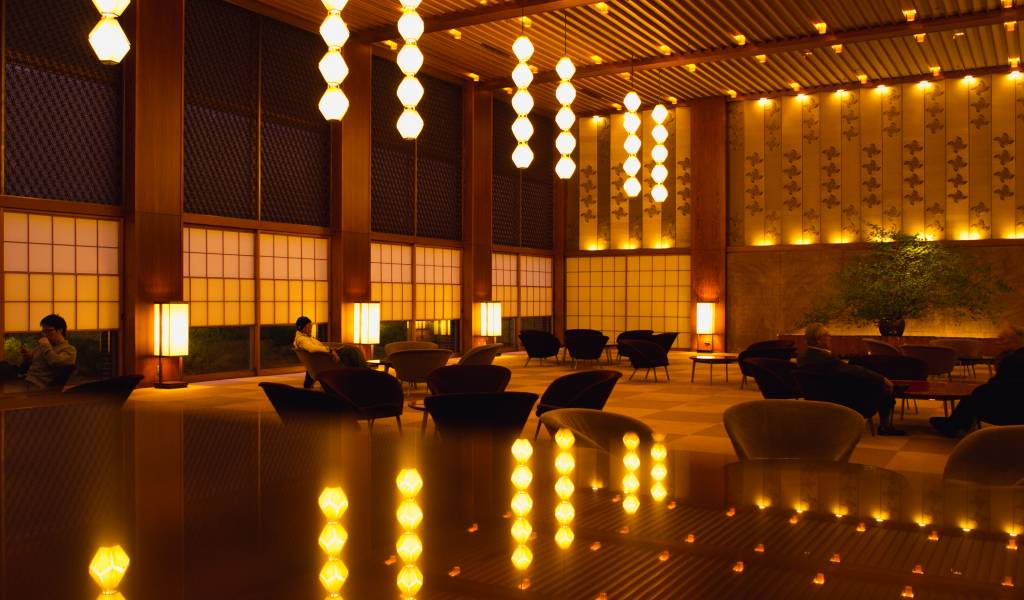 Hotel Okura: Last Chance to Taste Tokyo in the 60s

June 30th, 2015 | Grigoris Miliaresis
Sharing
Hotel Okura is no more! The last chance to see it with your own eyes has gone, but do enjoy the photos we have archived in this article.

The original idea was to keep it as cheap as possible (we have a reputation to maintain after all): a cup of coffee and a croissant for less than 1,000 yen at the lobby or the Camellia coffee house as a pretense to wander around the common rooms and get a last feel of one of Tokyo’s institutions, the Hotel Okura in Toranomon, just in time before its demolition in September. But this would be unfair to what the Okura stands and has been standing for since the early 60s, so this writer opts for a different proposition, still on the prudent side of things: a martini at Okura’s main bar, the Orchid. For 1,600 yen, you’ll find out how Tokyo in the 60s actually tasted like.

It’s hard to describe the Hotel Okura Tokyo without resorting to banalities and clichés: how the architects Yoshiro Taniguchi and Hideo Kosaka and how artists like Shiko Munakata and Kenkichi Tomimoto took elements from Japanese aesthetics going back 400 years and combined them in a way that would harmonize “wafu” (Japanese style) and “youfu” (Western style). And how this combination would end up, through the work of both modern construction crews and traditional shokunin (aritsans), something that stands in the perfect balance point between a traditional ryokan and a modern super-luxury hotel. The Okura couldn’t have been anywhere else but in Tokyo.

Unfortunately it will stop being here as well: as of September 2015, the hotel that hosted heads of state from all over the world (including almost all US presidents—being very close to the US embassy certainly helped in this), people of financial and industrial power, artists, actors, celebrities of all kinds and anyone who could afford its rates and could appreciate its unique offerings will close. And the renovation that will take 4 years will end up in a different Okura; there’s little doubt it will be wonderful but there’s also little doubt it won’t be the Okura that came to embody the best in Japanese design and aesthetics up to 1962.

In a way it makes sense: like its contemporary, the Shinkansen bullet train, the Okura was a showcase of what the Japanese were able to do less than 20 years after their country’s total devastation in WWII. The best way to demonstrate that were the 1964 Olympics and the Okura (as well as the Shinkansen, the highway system and countless other things big and small)—all part of the infrastructure accompanying the great event. Therefore it’s only fitting that the new Okura will be up for the 2020 Olympics, ready to dazzle a new generation of visitors to the world’s greatest metropolis.

The problem is that now people (Japanese and non-Japanese alike) are more conscious about marketing: anyone living in Japan the last five years has noticed how everybody is trying to use “omotenashi” (the idea of going above and beyond to accommodate a visitor or a customer) as a sales pitch—which is a shame since the concept is woven in the fabric of Japanese mentality anyway and even more so it’s hidden in details that the Japanese rarely notice but visitors certainly do. The Okura of the 60s was a sell, but a soft one; I’m afraid the intentions in its heir will be more conspicuous.

But I digress: what matters now is an experience of the Okura as it is—and as it will be until the end of August. If you are of the drinking kind, I’ll insist on the most iconic of the 60s drinks: a martini at the Orchid and if you are not, there’s an assortment of sweets from its world-class pastry chefs (you can see what’s available at any point here) starting at 400 yen. But after a visit I’m sure you’ll agree with me: there are things that have a price and things that have value. Japan is full of both but it’s the latter that sets it apart from other rich nations. Get on the Ginza Line, get off at Toranomon, walk for a couple of blocks, ignore the Toranomon Hills (that’s for amateurs) and step into the 60s. Anna Fifield at the “Washington Post” said it best back in February: If Don Draper was in Tokyo, this is where he’d be drinking.