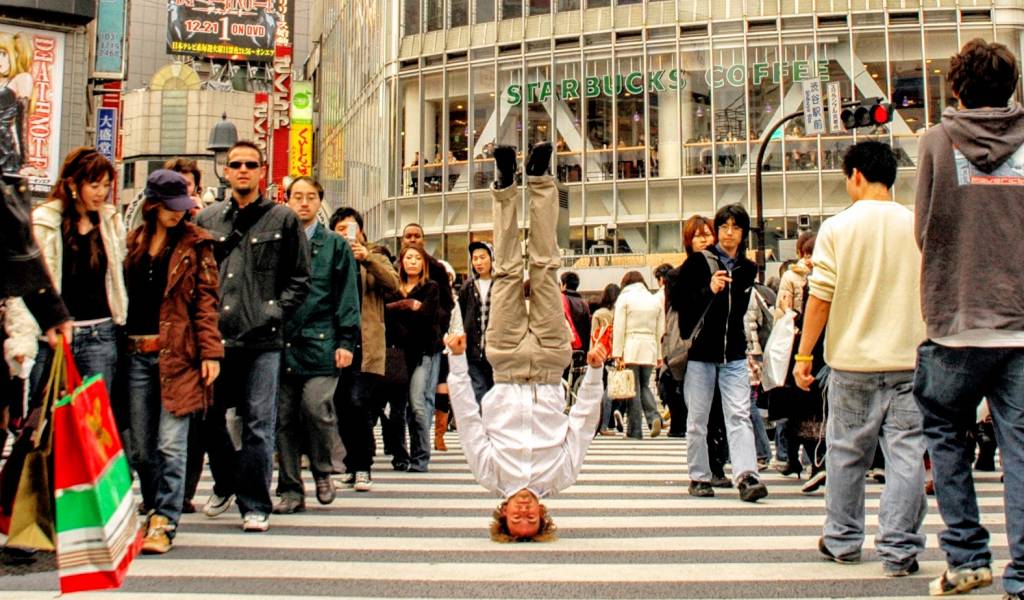 How to Photograph Shibuya Crossing

Memorial to a loyal dog and a beloved setting for any film shot in Tokyo. You may know it as Shibuya Crossing but the locals call it ザ・スクランブル The Scramble. Finding yourself here for the first time can evoke a few emotions, and whether you are in awe or in meh, you probably want to get a photo. You might even want to do a handstand. However you go about it, I have a few tips and pointers on how to photograph Shibuya crossing that might even help you reach the lofty goal of an Instagram-worthy photo.

First of all, you may not know what to expect, so give yourself some time to get your bearings and check out the crossing from various view points. If you researched ahead of time and have an image of what you want to capture then you’re ahead of the curve.

Do you want to get a night shot or a day shot? I arrived at 5:30 pm in order to get some golden lighting and planned to stay for a few hours to get night shots as well. The lighting can cause some challenges because the buildings create a lot of shadows. If you want to avoid this, then go once the sun has begun to set, early in the morning or on an overcast day. Personally, I liked the contrasts and effects the lighting provided.

You can always catch salary men there, but for a better chance of seeing a large amount of the similarly-outfitted then I suggest going during a weekday. Specifically during spring or autumn when it’s not so hot. If you want to get a photo of a lot of umbrellas, then head over during the rainy season (June)—but I advise against it.

Of course you have to experience The Scramble for yourself. There is enough time to get a shot or two in the crossing but just pay attention to the crossing signals and remember there are a lot of people just trying to go about their normal business.

Next, I headed over to a spot I have used before located on the second and third floors of the walk-way connecting Shibuya Station to Shibuya Mark City. This can provide an interesting vantage point of the crossing.

Know your surroundings. Keep an eye on what is being displayed on the large monitors because catching that moment when everything falls into place is part luck, but mostly patience and planning.

If you want to get the “classic” shot, then head over to Starbucks and grab yourself something to drink or eat. Be prepared to wait—a lot of folks are thinking the same thing. Although I like the vantage point to take in all the activity and people-watch, it is not the ideal place to take photos, especially at night. You are fighting both the tinted windows and the reflections from the inside lighting.

I was able to use the table to prop up my camera and get some long exposures. I normally wouldn’t recommend long exposures of people but it can work if you have some people that are stationary creating an interesting contrast.

Using long exposure to catch the traffic going through the crossing was a bit hit or miss since the tint on the windows interfered a bit. I did catch a large mobile billboard passing through.

After spending my time enjoying a Strawberry Frap it was time to head home. This is also a good time to get some last minute shots as the city transforms into a glowing metropolis. There was a time when you could get a view from the 25th floor of Excel Hotel Tokyu (Shibuya Marc City), but that has become a guest-only option.

If you have a more telephoto lens and you’re considering how to photograph Shibuya crossing, then you can easily grab a rather nice ariel shot of Shibuya from the 11th floor of the sparkly new Hikarie building. Although the glass can sometimes be a little dirty, even if you don’t time your visit soon after window cleaning it’s still an impressive and very classic “Tokyo” view. The photo above was taken on a mere smart phone (following a Typhoon).

In summary, if you are using a digital camera then don’t worry and take a lot of photos and keep your eyes open for interesting things (cars, people, buildings). Also, there are a lot of interesting areas in Shibuya if you are willing to do a bit of exploring. If you want to see the crossing at it’s craziest, I recommend visiting during the unsanctioned Halloween party.

I used a Canon 6D with a Canon 24-70 f2.8 II processed in Lightroom. If you have some photos you want to share, just tag them with #tokyocheapo or @tokyocheapo and enjoy your time in Tokyo. 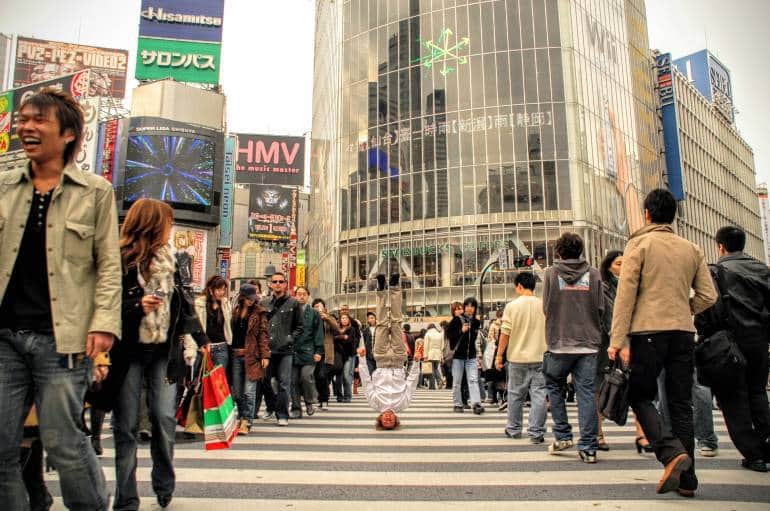 The “famous” headstand shot is actually one of Tokyo Cheapo founders, Chris. It was taken a few days into his first visit to Japan in the early 2000s back when foreign tourists were scarce.

First off, a massive “don’t try this at home, kids” warning: Headstands like this aren’t kind on your neck, and could result in serious injury. Also we see people attempting increasingly elaborate stunts at Shibuya crossing, this is not a good idea – trying stunts in the road is dangerous and could also get you arrested. There’s plenty of things you can do to get great and original photo without taking any risks.

This photo is from when I turned up in Shibuya for the first time, about four days into my first trip to Japan. I spotted a fellow foreign tourist with a fancy Nikon photographing The Scramble. So I went straight up to him and said, “Can you take my photo in the crossing… with me on my head?” and he replied, “Sure!” right away. Then we spent about an hour trying various angles, handstands and headstands. Back then tourists and people photographing the crossing were a rareity, and we certainly caused a lot of turned heads.

For other ideas on things to do in Shibuya, give the afore-linked article a read.

Shibuya
Written by: David Ishikawa
Filed under: Sightseeing
Tags:
Sharing
Questions or comments about this article?
Start a thread on our community forum
Ask our local experts about Tokyo