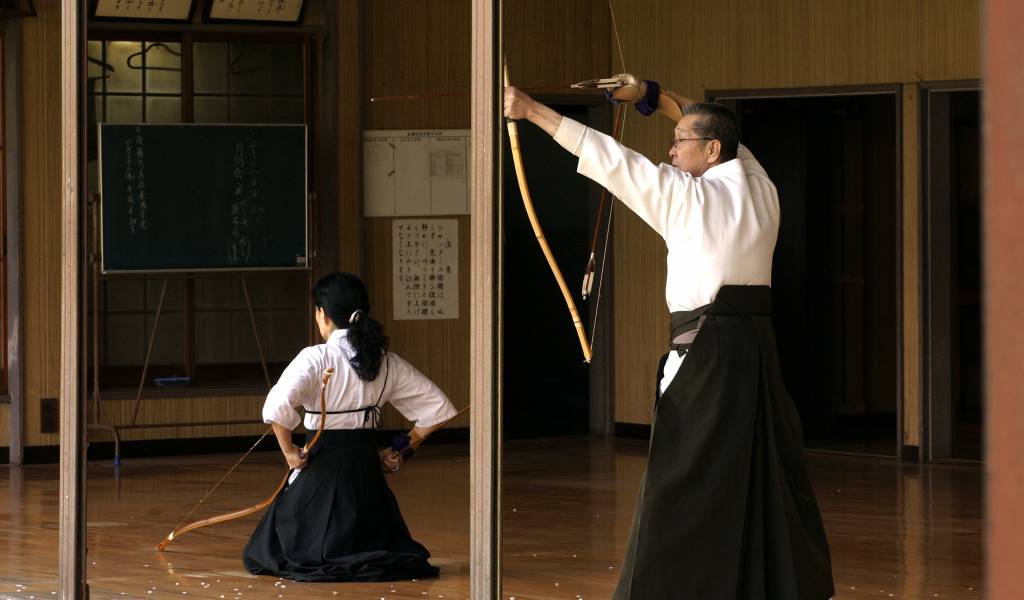 A little while ago we had the good fortune of learning kyudo (Japanese archery), thanks to the Meguro International Friendship Association (MIFA), a group that promotes cultural exchange between Japanese and foreigners. Kyudo dates back to prehistorical Japan, and was primarily for military use in ancient times. Today, it is a respected sport, and kyudo dojos and school clubs can be found around the country.

I had never tried kyudo, or even Western-style archery, so this was a totally new experience, and quite an uncommon one, at that. It’s not every day that one can easily come by a chance for foreigners to learn kyudo without knowing Japanese. One reason is that, unlike karate, judo, or kendo, kyudo is not as well-known outside Japan, so most dojos see little reason to cater to non-Japanese speakers.

The event, which was held at a gymnasium, was about three hours long, and it consisted of a brief orientation on kyudo, a hands-on experience, and some Q&A. Most explanations were in Japanese, but English-speaking volunteers acted as interpreters for the instructors.

We learned about the differences between Western archery and kyudo, the most conspicuous one being that Western bows are smaller and symmetrical, whereas kyudo bows (known as yumi) are large, long, and asymmetrical. Also, in kyudo, the arrow (known as ya) is supposed to rest on one’s thumb. When drawing the bow, the hand is drawn such that it’s behind the ear, whereas Western archers apparently never draw the bow farther than the cheek.

The way of the bow

Kyudo has some Zen-like principles; specifically, that the mindset is just as important as the techniques. The instructors emphasized the importance of staying calm, as if meditating. The mind must be cleared of all other thoughts, and one must focus merely on getting everything correct—the posture, the steps, and shooting the arrow (with the first two even taking precedence over the latter). The logic is that once you concentrate on getting things right, shooting the arrow correctly will naturally follow. I’m not sure if this is unique to kyudo, as any other task can also be done better if one puts his/her mind to it instead of being preoccupied with other thoughts, but kyudo literally means “way of the bow,” hence the emphasis on honing one’s mindset. Kyudo, after all, is both a sport and an art. Some practitioners even place so much importance on the mental component that they do not participate in competitions, believing that those detract from the spirit of kyudo.

After about two hours of practice, and several missed attempts to hit the target, did I get the hang of kyudo? Not really; I was barely starting to do so. One would have to be a super fast learner to become good at kyudo in a matter of hours. But did I enjoy it? Of course! Despite my failure to shoot properly, it was a rewarding experience nonetheless.

The good news is that you, too, can experience kyudo for yourself. MIFA organizes kyudo trial sessions for free on Sports Day on the second Monday of October every year (this year’s date is Oct 10, 2016). Slots are limited and you must get in touch with MIFA via email before the event to reserve a spot (the earlier the better) by providing your name, nationality, address and phone number. Some years they hold multiple kyudo events (not always for free, but for a minimal cost—under 500 yen), so keep an eye peeled.  Lack of knowledge of Japanese and/or kyudo is not at all a problem.

While membership may not be required, it is highly encouraged, as MIFA holds all sorts of other events throughout the year, and members can get discounts on admission, as well as notifications about upcoming events. Besides, membership is only 1,000 yen a year, or just 500 yen for students.

Kyudo being not mega popular among foreigners, it can prove difficult to find other places to learn kyudo cheaply with an English-speaking instructor. You can learn at the Meguro Chuo Gymnasium, where this event was held, on Sunday afternoons, from about 2:00-4:00 pm, for 400 yen, but the instructors do not speak English. Our suggestion? Find a Japanese date and take them with you!