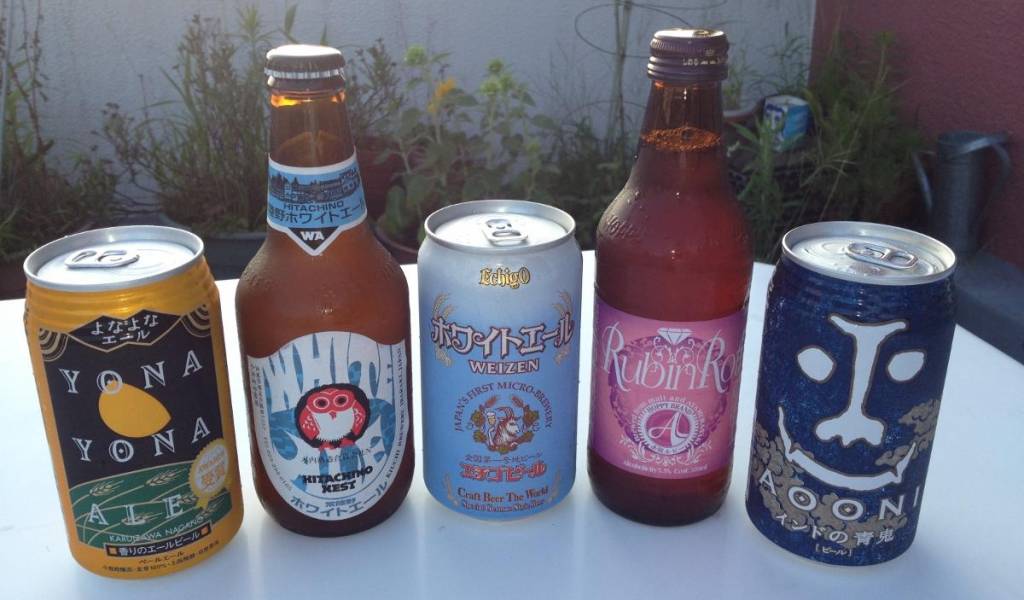 There’s nothing wrong with the beer from the ‘Big 4’ breweries in Japan.  Sure, the prices for a can of beer are higher than they should be – due in large part to the Japanese excise tax regime which puts a higher tax on beer than any other alcoholic beverage – but the main problem is that they are all boring, consistent facsimiles of each other.  If you’re happy with your bland pilsner then you needn’t bother with anything else.  If you’re into good beer and you feel a bit cheated paying 400 to 500yen for imported varieties, then we have some lower cost home-grown options for you.  4 of the 5 beers that we’ll profile here are under 300yen and they’re all produced by regional brewers who have decided to make interesting beers instead of yet another light, tasteless lager.

Aooni (blue devil) IPA is a product of Yaho Brewing, located in the upmarket resort town of Karuizawa, Nagano Prefecture.

Aooni has nice maltiness and a spicy hops flavour – but not in that fruity spicy sense, more in the way it draws your cheeks together when it enters your mouth and makes you lick your lips – it’s the kind of beer that beer drinkers appreciate and you want your kids to try to put them off alcohol for another five years. That said, there’s something incomplete about Ao oni – it’s a decent beer but I don’t feel the love.  Of the beers featured here, it has the highest Alcohol By Volume at 7% – so some good yards for you yen.

Yona Yona is another beer from Yaho Brewing and is one of the easier to find local craft beers.

This is a Pale Ale  and at 240 to 260 yen a can is one of the most competitively priced regional beers (at least in Tokyo).  It’s reknowned as a fragrant beer (it says so on the can) and has won awards.   It purports to use aromatic hops and it definitely has a fragrant nose.  The can proclaims that it has received a gold medal 8 years in succession in the American Pale Ale category of the International Beer Competition. ABV is 5.5%.

The first thing that strikes you with Yona Yona is the sweetness.  Luckily this is followed up with some strong hoppy bitterness.  It also feels like a substantial, flavoursome beer.  As the can says, it does have a strong summery fragrance and it goes down a treat while watching a Tokyo summer sunset.

Echigo hails from Niigata Prefecture – in the same location where Fuji Rock is held each year.  So if you head to ‘The Rock’ it would probably be worth checking to see if they have any brewery tours on at the same time.

Echigo White Ale is a German style wheat beer – so no fruity Belgian style additives!  It’s also possibly the best wheat based beer I’ve tasted in Japan. It has a great pale wheat beer colour and is extremely smooth – the ideal beer for a hot Japanese afternoon or early evening.  It has a definite citrus taste without the sweetness of a lot of Japanese beers and is also completely free of the metallic taste that I’ve experienced with a lot of Japanese wheat beers (the Ginga Kogen wheat beers for example).

Aside from White Ale, the Echigo IPA and Red Ale are also well worth a taste.

This is quite a different beer to the Echigo White Ale despite having the same designation as ‘White Ale’.  While the Echigo is a classic German style weizen, this is more in the Belgian witt bier tradition.  In fact it has so many odd fruity things in it that it’s technically classed as Happoshu – a special alcohol class in Japan for beverages that don’t meet the strict (German) definition of beer.  Because it’s happoshu, this beer actually attracts a much lower tax so it should be a lot cheaper!

Along with hops, it contains coriander, wheat malts, orange peel and nutmeg.  It has a nice cloudy appearance and as to be expected with the additives it’s quite sweet and spicy – thankfully free of the metallic aftertaste mentioned above. It could do with a little more hops to balance the sweetness but overall it’s a good early evening beer.

388yen is also a bit on the steep side but it doesn’t feel like a rip-off.

Hailing from Iwate Prefecture, Ginga Kogen is a widely available brand.  You can often pick it up from your local supermarket.  Unfortunately they rarely stock the Pale Ale – it’s usually the not very tasty wheat beer that they also produce.  However, this is a much better tasting beer than the wheat varieties.

Once again quite a sweet beer but plenty of hops to balance it out (pretty much what it says on the can). At a pinch, I’d go with the Yona Yona over this one but worth trying for yourself.

Rubin Rot* – The more observant among you might have noticed that I included this beer in the original line-up photo not having tasted it.  It was horrible and I wouldn’t wish this beer on anyone – only buy this beer if you wish to play a terrible joke on someone.