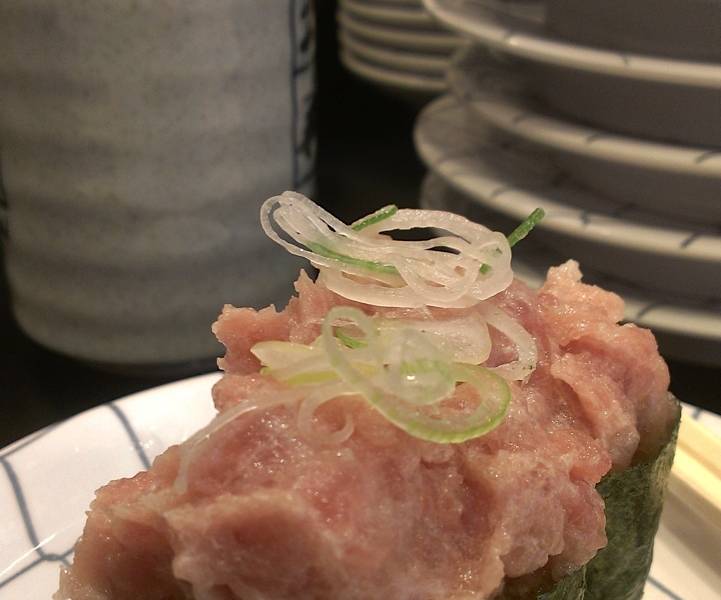 A Merry-Sushi-Go-Round at Ganso Zushi

I’m the kind of person who dances when I eat…especially when eating sushi. I recently found myself be-bopping on a sushi stool at Ganso Zushi, happily grabbing at plates and calling out orders.

While Ganso Zushi is a chain of kaiten-zushi/conveyor belt sushi restaurants, I opted for the old world hill of Kagurazaka, just a few minutes from Iidabashi station exits. It is a parade, a modest and delightful parade of quality sushi set at low prices: your optimal kaiten zushi chain in an interesting, enchanting neighborhood.

Choice/Prices: Glistening, fresh sushi starts at 130 yen a plate. Like many merry-go-round sushi joints, colorful plates are hot-glued to the wall with clear pricing. Also, at each diner’s station, there is a chart (in Japanese) with sushi choices at each price.

Currently, these sushi choices are featured as specials:

Buri/hamachi, also known as amberjack or yellowtail, is just 168 yen for two pieces. Engawa/that white, chewy part of fluke/summer flounder starts at 105 yen. Service Toro, or a large size toro/fatty belly section of the bluefin tuna, is 130 yen. There are other specials, as well, & you’ll see the small flyers as well as the fish circulating.

Kaiten Zushi sometimes has its flaw: fish rotating and rotating in what would be merry-go-round hell for us. And the average diner may not be able to detect its freshness, or lack of freshness–that is, how long it’s been on the ride.

What is different here: An accomodating, smiling sushi chef looks after you. Call out your requests and ask your questions, but he’ll also be looking to you, catching your eye, asking if there is anything he may make for you. This chef is so friendly, so warm, he would certainly help guide you towards new tastes and plates. His guests laugh under his charm; he has a knack for keeping the room eating and smiling. You are never interrupting him. He and his two waitresses make a great team; you get the feeling they are also at ease and happy.

Also, everyone orders straight-to the chef, receiving just-made pieces with warm rice and delectable fish. In between orders, we sushi-mongers help ourselves to the rotating plates of yuzu toro, salmon, & even duck.

Other items: Chawan mushi, that warm cup of steamed egg custard is under 200 yen; variations of miso soups are 168 yen, & petite desserts are available.

Refresh with: Sours of many flavors are under 200 yen, draft beer as well as a lage bottle of Asahi is 525 yen. Hot sake is posted at 399, while cold sake is downed at 420 yen. Asahi Dry Zero is 330 yen. Of course, I never tire of making my own green tea with the lilliputian tea scoops. So dainty, so perfect with sushi!

Clientele: In this particular restaurant, I was the only non-Japanese person. Only Japanese was spoken, & I relished the opportunity to take note of orders so I could piggy-back them, ordering one for myself, as well. Call it flattery, call it whatever. I ate some killer sushi.

Overall, Gaso Zushi was a hit. It just so happened that all of my favorite sushi was priced at 130 yen. Five satisfying plates=650 yen, plus cupfuls of green tea and gobs of excellent pickled ginger. It wasn’t until the end, that I sprung for a bulging, beautiful negi-toro maki, the crisp nori wound around a heavenly fatty tuna with chopped spring onion/negi. I also requested one of their sizable bowls of nori-miso shiru/miso soup with heaps of nori. These two items brought my final bill to 906 yen and I was absolutely content to have lunched under the care of this chef.

Throughout Tokyo, though above is Kagurazaka

Open with Maps
Ganso Zushi
Official Website ⚠️ Link in Japanese
Look to each store's hours above, but most open at 11:30 AM and close at midnight.
Written by: Melissa Uchiyama
Filed under: Sushi
Tags:
Sharing
Questions or comments about this article?
Start a thread on our community forum
Ask our local experts about Tokyo