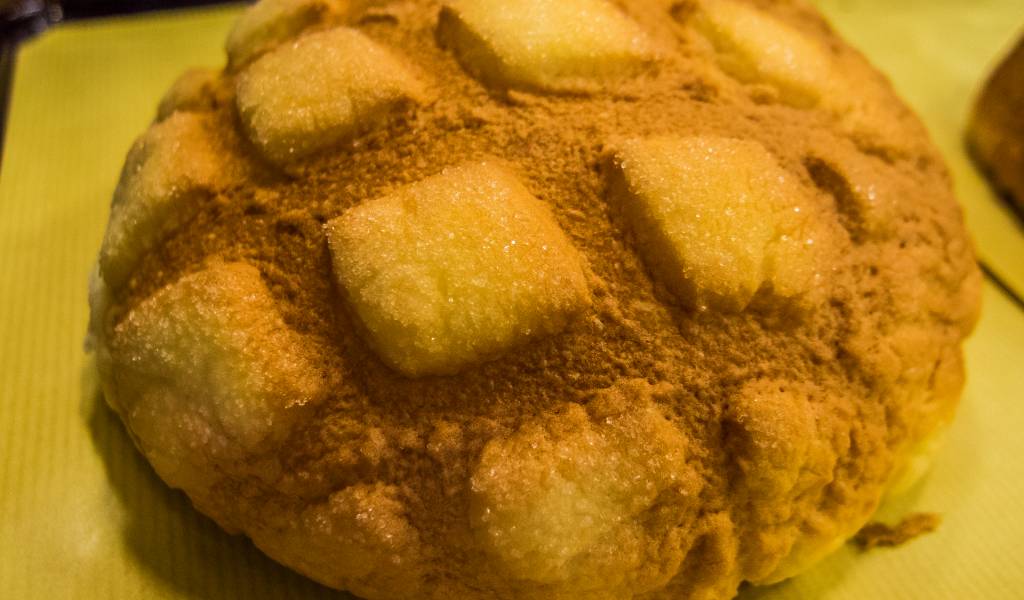 No, This Is a Melon Pan!

A little while back I said that for some things it’s better to avoid konbini (aka convenience stores). As I had predicted, this statement raised some eyebrows, but I stand firmly behind it and use Kagetsudo‘s melon pan to support it: konbini might have fooled you to believe that you know what a melon pan is, but unless you’ve tasted one from this Asakusa institution (since 1945), you don’t.

First of all, let’s get some things straight: “melon pan” are melon in appearance only (they are bread though so the “pan” part is accurate). The Chinese, apparently more familiar with pineapples call them “pineapple-bun” and Mexicans call them “concha” because to them it looks more like a shell. Even though some places in Japan at some point started adding melon flavor to them, the original recipe contains only milk and butter and this is what Kagetsudo’s jumbo melon pan tastes like.

For many years, Kagetsudo was a small place next to the two bodhisattva statues near Sensoji Temple’s enormous Nitenmon Gate; recently it moved (or rather, exploded) to four different locations all over Asakusa (check the store list on their website for the exact spots). All shops share the 1950’s atmosphere of the old place, with original ads and appliances from those days (up to and including all telephone booths and first generation pachinko machines) but the taste is the same. For reasons of convenience I prefer the Kaminarimon store, in a little street called Kaminarimon Yanagikoji, running vertical to Nakamise Dori aka “Souvenir Alley”; this is where the pictures in this post were shot.

At 200 yen a piece (or 3 for 500 yen) Kagetsudo’s melon pan is considerably pricier than  the melon pan you can get in any konbini. But, and I can’t say this enough, it is a completely different thing. The perfect balance between what is called “sakusaku” (one of the many words to describe “crispy” in Japanese) and “funwari” (ditto for “fluffy”), the explosion of butter and milk aroma and the way the crystallized sugar on the surface disappears after you bite into it, leaving the exact amount of sweetness is not to be found in any konbini melon pan. Add its size (they don’t call it “jumbo” for nothing) and the environment—if you decide to have it on the spot—you can have a perfect moment. If you’re in the mood for more spending, add another 200 yen and buy a bronze mon coin from the Edo period from the little basket next to the register. They make for an interesting souvenir.

Kagetsudo are rather fussy on the subject of eating their melon pan as you walk around Asakusa: they will either serve them in the shop or give it for “mochi-kaeri” i.e. take-out in a bag—you can’t just have it in a paper napkin like most fast food items. If you have a couple of minutes to spare I’d recommend the former for a, ahem, taste of 1950s Japan

Sweets don’t stop there, see our article on more sweets you can find in Asakusa.

Open with Maps
Kagetsudo | 花月堂
200 yen (or 3 for 500 yen)
Taito Ward, Asakusa 1-18-11 (for the Kaminarimon Shop)
Asakusa
Official Website ⚠️ Link in Japanese
03-5830-3534
Mon-Sun, 09:00-17:00 (melon pan often are sold out by 16:00 though so go early!)
Written by: Grigoris Miliaresis
Filed under: Sweets
Tags:
Sharing
Questions or comments about this article?
Start a thread on our community forum
Ask our local experts about Tokyo