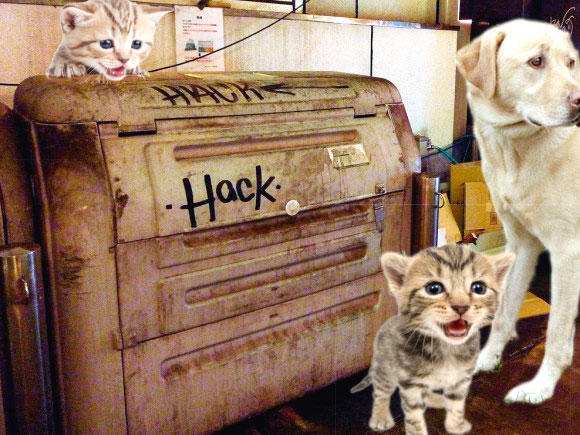 In Part I of Dumpster Diving in Tokyo, I shared with you a little bit about my experiences dumpstering in Tokyo, mainly for household items for my share house and for goods to donate to individuals living in the tsunami-struck Tohoku regions.

Since then, I’ve now moved into a Tokyo apartment of my own, and needless to say, a satisfactory portion of my furnishings have come from my “freegan” missions and accidental encounters on the street. Nothing majorly impressive, just plates, glasses, food containers, a frying pan, a rubbish bin, a bookshelf, a chest of drawers, blinds for summer and curtains for winter, a futon set (collected over two separate occasions from completely different locations, but a perfect semi double set – quite a rare coincidence I was thrilled about, as my place is small but I like having ample sleeping surface area), a foldable guest mattress, a cute fluffy floor chair with back support and a huge bag of freshly washed and neatly folded bedsheets from IKEA.

I have to say I was surprised at the level of interest people seem to have towards dumpster diving. Either you folk can’t get enough of a good bargain, or this recession thing must be really getting out of hand. Could these be the early days of a full-blown Tokyo dumpster-pocalypse? Am I going to have to start fighting some of you over the last shriveled carrot or expired soy milk behind the local supermarket? Though I’m sure there are those of you out there who would rather lick the toilet bowl than eat food retrieved from dumpsters, there will also be those of you who see no difference between the two actions.

I actually spent half of this year kicking it back in my old town in New Zealand, where my local dumpster buddies took me around all the fancy new grocery stores, as we greedily filled up the car with all sorts of fancy gourmet food retrieved from the dumpster out the back. Sadly, supermarkets in Tokyo will greet you with a very different story. Dumpsters here are kept securely under lock and key, and hidden from public view. Excluding the couple of pieces of rotten fruit I’ve seen at my local Hanamasa, I have never been able to find any traces of retrievable food. And believe me, I have looked.

Not one to give up so easily, I sent out a survey to my friends in Japan, asking all those who had experience working in the food/service/retail industry if they had ever witnessed instances of rejected food being thrown out or put on special offer. Some businesses inside large department stores sell packaged food past their sell dates to staff at slashed prices, but are never given away. At convenience stores, it’s up to each owner or the manager whether their part time workers can receive some of the outdated bento boxes or sandwiches, but most tend to strictly follow the company rules, which is “Throw out what you don’t sell”.

I was also told by several sources that factory workers for major food brands are offered excess sweet bread rolls and other processed food daily, but sooner or later the workers will have enough of all the chemical laden junk food, especially after witnessing and participating in the industrial manufacturing process of these products. Seems like a lot of what they sell in conbinis and supermarkets just aren’t something you should be eating for those who know what actually goes inside them. More reason to stop paying money for them and find ways to get them for free, because we all know how hard it can be to initially give up on all those delicious artificial sweeteners and colourings, despite our niggling suspicions about the long term effects of such vices.

One person who used to work in a large department store would witness dozens of huge 70L rubbish bags being carted out to the store dumpster every day, and was not aware of anybody attempting to take food out of there. So it seems that freeganism is still a very long way away from becoming an acknowledge practice, let alone an accepted concept. There’s no doubt about it when Japanese Google asks you if, instead of searching for information on フリーガン (freegan), you actually meant フーリガン (hooligan).

Finally, so as not to disappoint readers who desperately are in need of some cheap, if not free, food, I would recommend giving Second Harvest Japan (http://2hj.org/) a call. As Japan’s first food bank, these guys are dedicated to distributing food to people who for a variety of reasons, aren’t able to receive their necessary daily meals. According to their website, 6,000 metric tons of food are thrown out in Tokyo every day – that’ll fill up a few Tokyo Domes easily, I’m sure. 2HJ works with businesses so that at least a portion of what is thrown out is donated and distributed to those who need it more than the landfill. Several of my friends who were at one point going through serious financial difficulties were able to carry on until things got better thanks to the emergency food package from the kind people at 2HJ. If you or someone you know may benefit something like this, I suggest you give them a call and explain your situation.

Written by: Nikki Kittenmouth
Filed under: Lifestyle
Tags:
Sharing
Questions or comments about this article?
Start a thread on our community forum
Ask our local experts about Tokyo