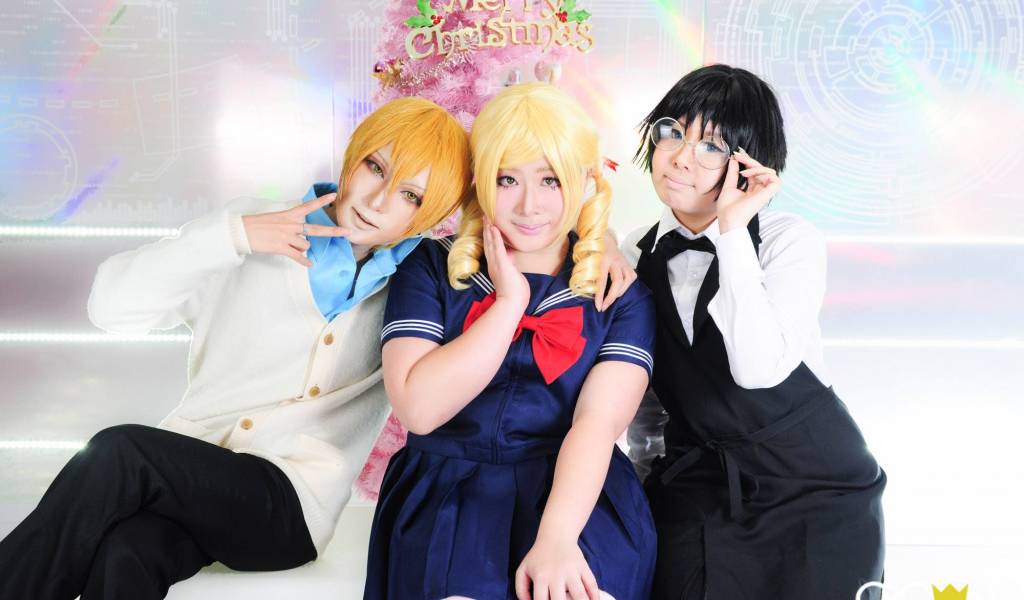 Ever wanted to try cosplaying, but didn’t know how to start? Actually, it’s really simple—just pick a character, dress up as the character, and pose/act in character for photos. But we understand that finding—let alone making—a costume, a good wig, and props, as well as getting the make-up right, can be difficult. Finding the confidence to try can be difficult, too. But the good news is that you can now indulge in your fantasies of being your favorite character for a few hours at Studio Crown, in the heart of the otaku mecca that is Akihabara.

Accessible both from Akihabara Station and Ochanomizu Station (it’s a short walk away from Kanda Myojin), Studio Crown was opened as a photo studio that cosplayers could rent for photo shoots. It still serves its original purpose, but in 2015, its owner, Hazuki, decided to take things one step further. Inspired by Kyoto’s maiko makeovers, she decided to offer cosplay experience packages to foreign tourists.

Hazuki explains that, having lived and studied abroad, she wanted to open up her studio to be more foreigner-friendly. Additionally, she wanted to attract not only those with an existing interest in cosplay, but also those who were curious about cosplay but somehow never got to try.

This quick, easy, and simple plan is a great way to get things started. The costume selections for this plan aren’t associated with specific characters, so you can be a random ninja, maid, schoolgirl, ninja, or shrine maiden. You’ll get your picture taken for 5-10 minutes, and receive one digital copy of a photo of your choice, and one Polaroid photo. For an additional 2,000 yen, you can also walk around Akihabara in costume for three hours—an add-on that is available only for this plan.

A note for the plus-sized: unfortunately, this isn’t Studio Crown’s fault, but it is quite difficult to get large-sized costumes, and Japanese sizes aren’t that large to begin with. Hence, the studio doesn’t have many large-sized costumes; most of the ones in bigger sizes are schoolgirl uniforms, so this might be the best plan for you. (Alternatively, you can get the 90-minute makeover course but pick one of the costumes from the basic course.) Rest assured that Studio Crown is doing its best, though, so we can most likely expect their selection of costumes to increase over time!

Availing of this plan lets you choose from a selection of anime characters’ costumes, as well as put on a wig. You are, however, responsible for your own make-up. You then get a 10- to 15-minute photo shoot, and get to keep one digital image and one Polaroid.

Go for a complete makeover with this course! Not only do you get to choose from the same range of costumes above and wear a wig, but you’ll also get your makeup done by experienced Japanese cosplayers with makeup skills that will make you look like a completely different person. After the 40- to 60-minute makeup session, it’s time to for a 20-minute photo shoot, after which you’ll receive six digital images and one Polaroid.

For all plans, further add-ons such as additional photos, or even requesting a specific character’s costume that’s not on the studio’s list (for 5,000-15,000 yen, depending on the character—this request must be made at least a week in advance, and keep in mind that some costumes might be near-impossible to be found), are also available. 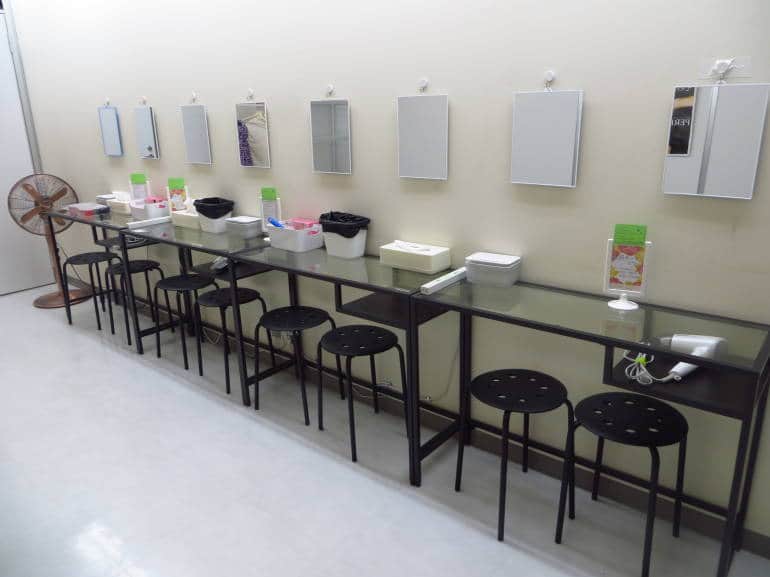 Hazuki invited me to try the Perfect Costume course, and I did end up looking completely different! First, I picked a schoolgirl uniform and a blonde wig with ringlets.

This is what I look like on a regular day, without any makeup… 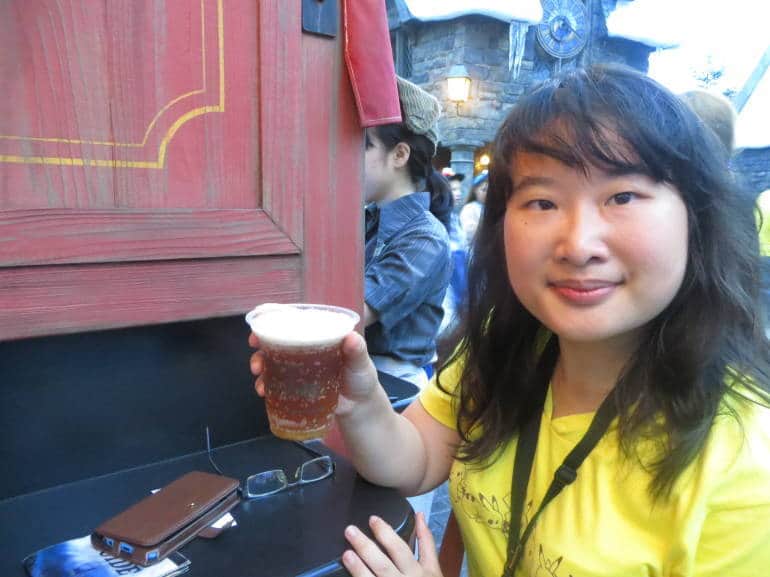 …but the incredibly talented cosplayer Chamomile (Twitter here), a versatile lady who can look like a dashing young man one moment and a beautiful girl the next, worked her magic to give me a more animesque look. She asked what kind of look I had in mind, and since I was dressed up as a schoolgirl, everyone agreed that a cute, girlish look was more suitable.

Chamomile clearly knew her makeup well; in addition, she also had several tricks up her sleeve, such as using facial tape to lift the face and make it look smaller.

After a while, the transformation was complete! Next, it was time to shoot. Hazuki snapped away. Posing isn’t your strong point? No worries; Hazuki and the cosplayers will be happy to guide you!

Here’s one of the results of the shoot.

Sadly, like Cinderella, the magic had to end, and I got changed, but not before leaving a thank-you message in the studio’s guest book.

“I want to cosplay again!”

If the experience inspired you to cosplay more often, and you live in Japan (or the next time you’re in town), do join Hazuki’s meetup group, Tokyo Cosplay Meetup (they’re also on Facebook) to get the details on her events. She regularly holds parties at Studio Crown, where cosplayers and photographers can socialize and shoot in a relaxed setting. According to Hazuki, she missed the ease of making friends during her time in America and Europe, so she hopes that these parties can help cosplayers and photographers connect.

Did the experience bring out the model in you? Then bring a shutterbug friend and rent Studio Crown. Prices start at 1,700 yen for 3 hours on weekdays (2,400 yen for the same duration on weekends). 6- and 9-hour plans are also available, and in case you have the energy to shoot all night, there’s an all-nighter plan from 11:00 pm-7:00 am for 4,600 yen. The studio has different sets for you to strike your best pose: a minimalist, white-walled area, a Gothic area, and a funky, futuristic area (which is also suitable for idol-type characters). There are also a few props available for rent.

Additionally, for more information about cosplaying in Japan—etiquette, where to buy costumes and materials, and more—check out Cosplay Tokyo, a Facebook page and YouTube channel run by Alex and Leona, a photographer-and-cosplayer couple that are friends with Hazuki. Good luck, and enjoy cosplaying!

The author received a free trial session in exchange for the review, however all opinions are her own.
Studio Crown
Cosplay experience plans from 3,240 yen studio rental plans from 1,700 yen
5/F East Building B, Sasage Building, 2-4-6 Sotokanda, Chiyoda-ku, Tokyo
Akihabara
03-5577-5995
10:00-22:00
Written by: Tiffany
Filed under: Lifestyle | Things to do
Tags:
Sharing
Questions or comments about this article?
Start a thread on our community forum
Ask our local experts about Tokyo