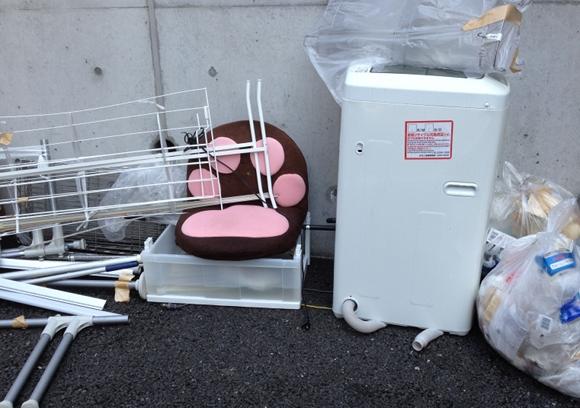 5 Ways to Recycle or Dispose of Stuff Cheaply in Tokyo

Visitors to Japan often wonder why you can find perfectly good appliances, furniture and other equipment placed by the side of the road for garbage collection. The reasons for this are mostly related to the way people live—there isn’t a lot of storage space and most people (in the central city at least) don’t have easy access to a car. For this reason, the secondhand market isn’t very big in Japan. Also, if you find a secondhand shop in your area, you’ll see that the prices are not as low as you’d expect.  Even worse, because no one is interested in buying your old appliances you’ll often end up paying a few thousand yen just to get rid of a perfectly good appliance or piece of furniture. Unfortunately, some people either can’t afford or don’t want to pay these fees, so unwanted appliances (sometimes containing toxic components) often end up dumped in scrub on the borders of urban areas.

Note: If you’re reading this because you’re moving out of the country, our dedicated guide to leaving Japan is worth a read.

There are a number of groups on Facebook (all closed) for people looking to recycle, exchange or sell their used goods. Make sure you read the rules for each before joining and posting your stuff.

Freecycling is a system popular around the world which encourages people to gift usable items to anyone who wants them. In Tokyo, this happens through Tokyo Freecycle group. Everything offered must be completely free—although if you want something, you’ll probably have to pay for the shipping.  I used it to dispose of a 24 port ethernet hub. I maybe could have got 1,000 yen for it (a big maybe) but I would have had to go through a lot of trouble. With Freecycle, I just gave it to the first person who said they wanted it. Typically there are 3 to 4 posts per day, but occasionally, the rejects from a sayonara sale are put on the list and there can be a flood of good items available for free.

Some appliances are inherently more recyclable than others.  For example, you will have a lot of trouble trying to find anyone willing to take an old printer off your hands—they break, they’re expensive to run and new ones don’t cost that much anyway. Computers however are full of parts that can be recycled in reconditioned machines—fans, cases, hard drives, CD/DVD drives, power supplies and monitors can all be re-used or re-purposed. Given the expense of sending them back to the manufacturer for disposal, you’re better off looking for people willing to recycle them for you. A service that I found particularly good was pc819.com (link in Japanese) which I’ve used a few times.  If you don’t speak or read Japanese, you might need to ask for someone to help you.  With this service, not only the recycling is free but so is the shipping—as long as you use Kuroneko Yamato takyubin to send it. They claim that they’ll also wipe all the data from your hard drive, although I wouldn’t rely on this—you should wipe it yourself. Don’t be clever and remove everything of value first (RAM chips, power supply, hard drive etc.) or there is a good chance they’ll reject it—then you’ll end up paying for the shipping both ways. Another similar service which I haven’t tried is pasosokonsyobun.com which follows the same process. An interesting aspect of their service is that you can send other things (like printers, etc., for free in the same box as the computer or other high-value item).

If you’re buying a new fridge, TV or washing machine, most retailers (Bic Camera, Yodobashi Camera, etc.) will dispose of your old one very cheaply or even free of charge. Don’t forget to mention it when you are purchasing the item—or before for a little extra negotiating power. 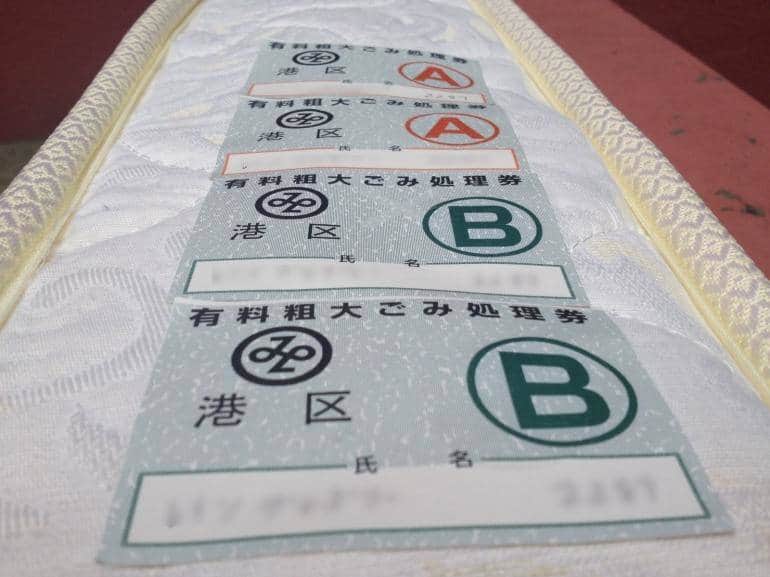 This is the standard way that most people use to get rid of large items in Japan. Every city (and ward) in Japan offers a service in which they collect large rubbish (sodai gomi).  If you don’t speak or read Japanese, then your ward or city should at least have some information in English on their web site about this. Typically you have to call a number and explain what you want to throw out and tell them the size of the item. Based on this they will tell you how many ‘粗大ゴミ処理券’ (soudai gomi shori ken—stickers you attach to the item) you need to buy and when to put it out for collection.  The stickers can be purchased from just about any convenience store. It’s a bit of a pain and sometimes can be expensive. If you don’t speak Japanese, they should have at least one person in the office who can speak some English to help you through. Also be aware that not all things can be put out with ‘sodai gomi’.  For example, printers are OK, but computers are not. By law, the original manufacturers of the computer are responsible for its disposal. Don’t think they’re obliged to do you any favours thoughdi—sposing of a desktop computer through the original manufacturer might cost you 6,000 yen or more.

You can’t be in Japan for longer than a few weeks before you notice the ‘kei-trucks’ driving around your neighborhood very slowly blaring out a recorded message exhorting you to bring out your appliances and have them take them away for free or even pay cash. Despite what the announcements claim, they’ll only do that if they can get a lot for selling it—so it basically has to be a brand new appliance!  If it isn’t new, you’ll likely have to pay them a few thousand yen to get rid of it. The collectors actually call it a ‘disposal’ fee—which didn’t make a lot of sense when I used one of these guys to get rid of an old analog (it was still LCD) television. Despite saying he was going to ‘dispose’ of it for 4,000 yen, the guy insisted that I dig up the power supply and the remote control for him to take as well!  I’ve seen programs on TV where they actually take these old TVs, pile them into containers and send them off to places like the Philippines or South America. This raises ethical issues as the disposal of these items is then offloaded to poorer countries less likely to have the resources to do it properly.

This post was originally published in April 2012 and was updated in April 2016.
Written by: Greg Lane
Greg's Tokyo favorites are: Shinshu Osake Mura, Kiyosumi Teien Garden, The American Craft Beer Experience 2023
Filed under: Household
Tags:
Sharing
Questions or comments about this article?
Start a thread on our community forum
Ask our local experts about Tokyo