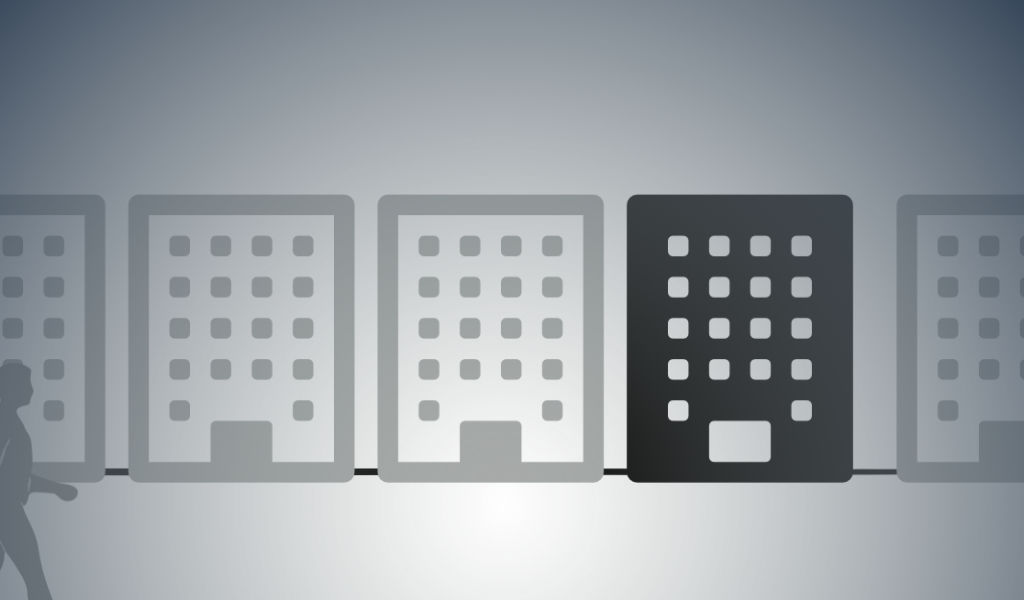 Jiko Bukken: The Cheapest Apartments in Tokyo—But Only If You're Brave

Imagine you’re with real estate agent and you hear this:

“So, what do you think of this? 2LDK, 60 square meters, West Tokyo, ¥50,000 a month. Just been renovated to have a nice new kitchen, it’s on the 6th floor, only one month deposit! It’s a three-minute walk next to a station in a quiet residential area. This area has views of the mountains but it’s only 30 minutes from Shinjuku on the Chuo Line. No pest problem. No loud neighbors and I’ll even knock it down to ¥40,000 for the first year—and I’ll throw in a bike! No, you’re not sharing with anyone. It’s yours! I can get you the keys tomorrow and I’ll throw in a month’s free rent because it’s unfurnished.”

You’ve just moved here from the sticks, your first paycheck is in two months, you need an apartment in the city NOW! And no, I’m not spamming you. This. Is. Real.

OK, a disclaimer here. Usually this site keeps things light, fun and friendly. What we’re going to talk about today isn’t really fun, per se. I don’t want to come across as clinically cold, I’m just talking from what I know on the subject. Others out there are far more qualified on a practical/contractual level and also you, dear reader, should be able to make up your mind whether you want to carry on scrolling.

The reason your new potential living quarters are so cheap is that the property is stigmatized. The reason your estate agent is reaching used car salesman levels of enthusiasm is because he hasn’t been able to shift it for a year. The reason that the kitchen is new is that a dead body was found on the floor of it.

This is the world of the jiko bukken (事故物件), the “black property”, or the “psychologically harmful property” (心理的瑕疵物件). As mentioned before, I don’t want to get too grim, so let’s keep it super practical.

First up, when the property is classed as a jiko bukken, it is usually something that has resulted in a fatality or some seriously harmful event. The law (in Japanese) is a bit more specific about it—a jiko bukken follows this criteria:

It doesn’t matter which reason, the property is now stigmatized. If it is part of the UR housing scheme, or some other government housing scheme, chances are part of the property will have the room in question refitted and rented out at a cheaper rate. If it was a private rental, chances are the landlord will try to renovate it as much as possible, or even demolish and redevelop/sell the land alone.

Secondly, YES, the estate agent must tell you about it when asked. There is an often-used loophole in which only the first tenant after the fact needs to be informed. So, if there was a temporary one-month rental after the event and then you show up, there is no obligation for the realtor to be transparent about it to you. Most agents here do have some sort of soul, so they are usually OK about it when asked. However, in my case, when I pressed an agent showing me around a ridiculously huge open house in Shibuya ward, worthy of Tony Montana, she informed me that anything related to the history of the property had to be told via her manager. Whether this is a legal loophole, I don’t know, but it should make you think, “Why?”. However, you can’t rule out the chance that the realtor doesn’t know as the landlord has failed to tell them.

If you think this has been a bit morbid, but you still want a cheapo apartment, there is always the 法律的瑕疵 (horitsu-teki-kashi)—legally flawed buildings. These are either not up to current safety standards or will soon be demolished for new infrastructure/buildings to be put in its place. These are harder to find, but a good realtor, as well as researching any planned building or infrastructure work in your local ward should be able to help you out.

But again, I’m digressing too much! You just want the apartment, right?

How to get a jiko bukken apartment

All you gotta do is ask, slim. If you go to a realtor and say “I am specifically looking for a jiko bukken”, you might expect them to look at you like you’re some weirdo who watches horror films all day and trolls YouTube. However, chances are they’ll be fairly happy. These are properties that they really want to get rid of. So, just ask! You might be surprised at what turns up. It will also make any awkwardness disappear from the further conversations you’ll have at the properties. Do bear in mind you are still subject to the same scrutiny that you’d receive with renting any other property here (visa status, amount you can deposit, occasional credit checks and guarantors), but you may find yourself somehow speeding through that red tape.

Hatena also recommends talking to local residents, but I personally feel that this may not always be reliable, particularly if there is nothing you can use to verify what is being said (e.g. local news articles).

Ol’ cyberspace has plenty of resources for the armchair researcher:

UR Housing has its own list of Kanto apartments (and also covers other areas).

The site has been recently updated to cover all parts of Japan, and, as you can see, the stigma only lasts so long; most of these places only have reduced rent for a year. Also, I note on this current version of the site, the reasons for the reduction are not mentioned. I would encourage anyone looking into these apartments to ask UR directly if there is any further information.

House rental giant SUUMO are surprisingly transparent about “accident properties” on their site. Again, the explanations are limited to just explaining the property is a jiko bukken. However, some may say they’re a little bit too transparent. Back in 2013, they tried to rebrand jiko bukken as perfect for the single person as you get to live with a ghost. They even put a picture of a cartoon ghost to emphasize that you’d be living with something along the lines of Casper the Friendly Ghost rather than Sadako from Ring. As you can imagine, this went down extremely well and didn’t at all look like exploiting a bad situation.

I’ve left the best until last and I’m about to take a deep breath before writing it—Oshima-Teru (sometimes the map defaults to somewhere not in Japan, but you can drag it back). This site is the best resource you’ve ever seen if all you want to do is look for areas that could be host to cheap apartments. This will list (usually with photos), properties or areas where someone died and the reasons and method of that death. It’s not official, so you should try to independently verify anything listed, but there’s no denying it could prove useful when scouting areas. You might want to visit a website with pictures of cute animals after though, to try to wash your mind of this grim business. 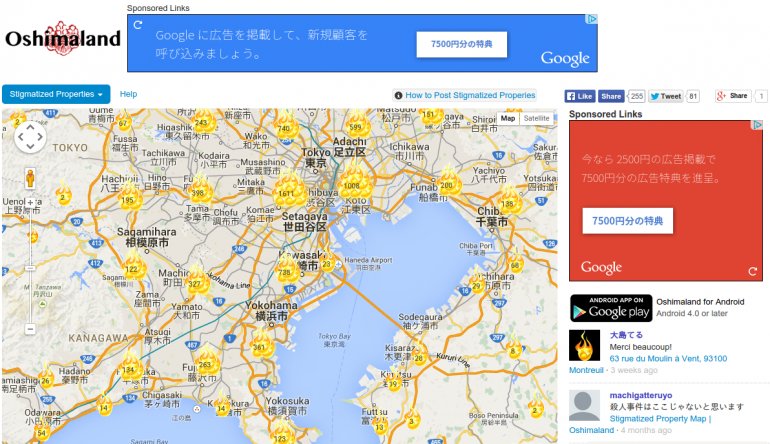 According to Oshima Teru and a few other search engines, I found quite a few high-priced places that didn’t seem to be affected by a stigma attached to the building or the apartment history. A fairly popular tower residential block in Shinjuku is listed as an accident property, yet rent for the floor in question is only a small fraction cheaper than the rest of the apartments in that building. Whether this is a sign of people being more practical and less spiritual is anyone’s guess, but it certainly shows that location can still be key, even with jiko bukken.

Ultimately, it’s up to you if you want to live in a property where someone has recently died, but when looking at these apartments it’s crucial to remain clinically practical. For example, in the case of a lonely death apartment where a body may have been present for some time, look to see if the body caused a pest or odor problem and if that’s liable to re-occur. Is there any structural damage to the room in the case of a suicide or arson? Even be specific with the land itself if you find out that it has been built over a well or another water source that could lead to destruction in an earthquake.

It may seem a bit mercenary to look for these kind of apartments with the intention of focusing purely on the mega Amazon shopping spree you’ll be doing with the money you save on rent. I’m not here to change your mind, but what I’ve done when considering any short-term rental where there is even the faintest whiff of jiko bukken, I remind myself that just about everywhere you walk in any city, chances are someone has died there years ago when everywhere was a battlefield. As to whether that settles your mind on the matter is not for me to say, but I hope this helps you.

(If you’re looking to rent, but jiko bukken isn’t for you, check out our full guide on cheap apartment options.

If you’re in Tokyo and you need help or to talk to someone, here is a list of English mental health resources in the city.

Written by: Ryo Seven
Filed under: Living
Tags:
Sharing
Questions or comments about this article?
Start a thread on our community forum
Ask our local experts about Tokyo