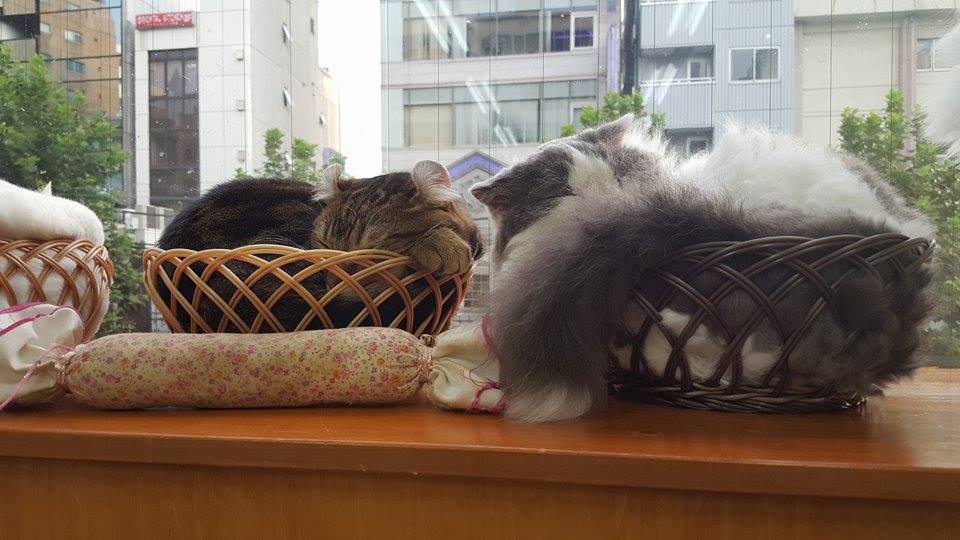 The Cost of Keeping a Cat in Tokyo

People know me as Tokyo Cheapo’s resident rabbit handler due my intense, some would say overbearing, love for my two house bunnies. But I also share my tiny Tokyo apartment space with my cat Brienne. She is the first cat I’ve ever had, and while I initially had little to no idea what to expect coming into the relationship, I have picked up a few tips for keeping her fat, healthy and spoiled on a relatively cheapo budget.

Let’s just throw this out here now. Pet shops are notoriously awful. There is little reason to support pet shops and breeders when there are too many animals that are in need of homes. It’s so serious that 500 cats and dogs or euthanized every day in Japan. If you can’t be bothered to go through with the adoption process, or spend the time needed to bond with an older pet, you might want to rethink having a pet in the first place. Regardless, a kitten shouldn’t cost 100,000 yen. Spending exorbitant amounts of money for an animal from a pet shop just gives the pet shop incentive to restock their cages with more mistreated animals from puppy and kitten mills.

Now that the sad stuff is out of the way (for now), let’s talk about adopting your new best friend. I found Brienne through a friend of a friend. An ojiisan let his cat get knocked up and before he could decide on what to do with the litter, I was able to take in Brienne and find a home for one of her brothers. If you’re not exactly waiting for fate to drop a cat in your life like in my case, Tokyo has many agencies out there that can help you. Probably the most well known is Animal Refuge Kansai (ARK), but there are others. Many of these are NPOs and run entirely on volunteers, so you should try to be patient with them. In most cases you’ll need to pay for transportation, shots and neutering or spaying fees, but they’re normally discounted. You can also try contacting local vets as they sometimes have or know about animals in need of homes.

Some adoption centers in Tokyo are:

Arkbark is an antastic NPO that’s run for nearly 20 years. They’re mainly active in Osaka, but they’re active in Tokyo as well (Tokyo ARK). If you find a pet you like on the Osaka website, you can have them transported to Tokyo.

Chiba Wan has found homes for over 3500 animals in the 10 years that they’ve been working in Tokyo.
They have adoptions events throughout Tokyo multiple times a month.

Japan Cat Network: While not located in Tokyo, they are a fantastic volunteer-run organization with help and information on cat adoption in Japan.

Probably the most expensive part of my foray into cat ownership has been veterinarian visits (but not nearly as expensive as trips to the bunny doctor). It’s also the one thing I personally wouldn’t try to skimp out on. I lucked out in that my vet, a kindly old man located near Nishi-oi Station, offers exceptional pet care that fits inside my cheap budget. My advice is that if a vet allows things like impromptu visits and actively works to control the stray population with trap and release programs, they’re more likely to be a vet you can trust. They’re also usually less pricey.

For example my vet has a sort of bounty system on strays. He’s a neutering machine offering people roughly 2,000 yen to bring in stray cats. I wouldn’t normally trust a guy hell-bent on collecting scrotums, but with cats it’s just a different story. The cost of neutering and spading varies, but you should expect to pay around 25,000 yen for a female and 15,000 yen for a male. Low-cost clinics like my local vet will be a lot cheaper. Sometimes even half the price. I payed 13,000 yen to have Brienne spayed. There are even government subsidies for pet neutering/spaying offered in some areas that makes it even cheaper. You should contact your local ward office to find out if it’s available to you.

Vaccination will also vary depending on the vet. Brienne’s initial vaccinations when she was a kitten ranged from 1,300 yen to 3,500 yen each. By law, dogs are required to receive an annual rabies shot. While I couldn’t find any information on if the same is true for cats, I still have Brienne receive the recommended vaccinations that my vet suggests. On the other hand, items like flea medication are normally more expensive (over 5,000 yen) if bought from from the veterinarian directly. You’ll have better luck with alternatives found at department stores (under 2,000 yen).

Most importantly, try to find a vet within walking distance to your home. You want to be close by in case an emergency goes down. Don’t be afraid of asking them tough questions either. I always ask my vets how many surgeries they’ve performed and how many pets have died due to complications. After the awkwardness that always accompanies those questions, and If you’re satisfied with their answers, start building a rapport with your vet.

This is probably dependent on your cat. Brienne doesn’t enjoy dry food. Sure I can force her to eat it. I mean I’m the master, right? Sure I am! And she’ll promptly reward my new found sense of authority by throwing up in my laundry.

A lot of cat owners that I know go with Amazon, but I don’t have much luck there with my particular brand (Purina Felix), so I opt for department stores. I pay around 68 yen per packet (one serving), but you can find brands as low as 50 yen per packet and about 100 yen for the fancy stuff. If your cat would rather have dry food, the average for brands like Purina is around 1,500 yen for a 2-kg bag. Another alternative and cheaper brand is Kal Kan (dry and wet style), but if you want to go even cheaper, try department store brands. Both Seven and Seiyu have their own brand of cat supplies that are always the cheapest on the shelf.

Likewise, department brand kitty litter is usually the cheapest. While you could spend 1,000 yen for a bag of crystal rainwater scented litter orbs, in the end, your cat is just going to shit on it. The average is about 350 yen for a 5-L bag of the cheaper stuff, and about 550 yen for the median brands like LION. Also while I’ll almost always find food cheaper in store, you can find great deals on bulk kitty litter on Amazon. (Word of warning: do not trust the flushable kitty litter. I’ve heard from more than a few cat owners about their ruined plumping.)

Anytime I try to make my cat like me and spend more money on her than I would a girlfriend, she calmly walks past the gift and proceeds to play with the Amazon box it was shipped in. She’ll joyfully shred the box to pieces for an entire week while the intended toy gathers dust. Cats either cannot or choose not to see the difference between discarded bottle caps and fancy battery operated whirling mice toys. Buy your cat a couple of scratching blocks and pick up some free boxes from the grocery store. If you just have to spend money on cat toys, practically every 100-yen store has an aisle for pet supplies and toys. If you’re looking for cat towers,

Amazon is again your best bet.

And now we’re back to the sad stuff. When the eventual heartbreaking fate of pet ownership reaches its climax, it doesn’t matter how much of a cheapo you are, your pet deserves a respectful burial. Unfortunately, most of us don’t even like to think of that inevitable future, much less plan for it. While where I’m from, and I suppose out in the country, you could do the deed yourself, however your options are limited in Tokyo. Most people have their ward dispose of their deceased pet (varies by ward with the average starting around 2,000 yen), but the cold hard truth is that your beloved friend is going to end up in a mass grave if you go that route. There are pet cemeteries in Tokyo, but it’s understandable that some people just cannot afford the costs.

One alternative is to contact your local temples. Pets are steadily becoming regarded as family members in Japan, and funeral services for animals are no longer out of the ordinary. If you cannot find a temple in your area that offers pet funerals, there are companies that will help you find a temple that does. Japan Pet Ceremony for example. Prices will differ depending on the temple performing the funeral, but the average is 40,000 yen for pets weighing from two to five kilograms. I guess when the time comes I’ll be putting Brienne on a diet.

Another alternative is PET 594 CAR, a mobile cremation service that will come directly to your apartment. While the idea of cremating your pet in the back of a truck is off-putting, the franchise is highly regarded. The cremator is considerate, and will meet you somewhere more peaceful for the cremation if you so desire. An entire service from incense to Buddhist hymns can also be requested. After the service is done, the cremator will place your pet’s ashes in an urn. Prices start at 15,000 yen for animals less than one kg. For animals heavier than 25 kg, a normal crematorium is needed. The maximum weight is 60 kg and costs 58,000 yen.

Written by: Aaron Baggett
Filed under: Household | Living
Tags:
Sharing
Questions or comments about this article?
Start a thread on our community forum
Ask our local experts about Tokyo