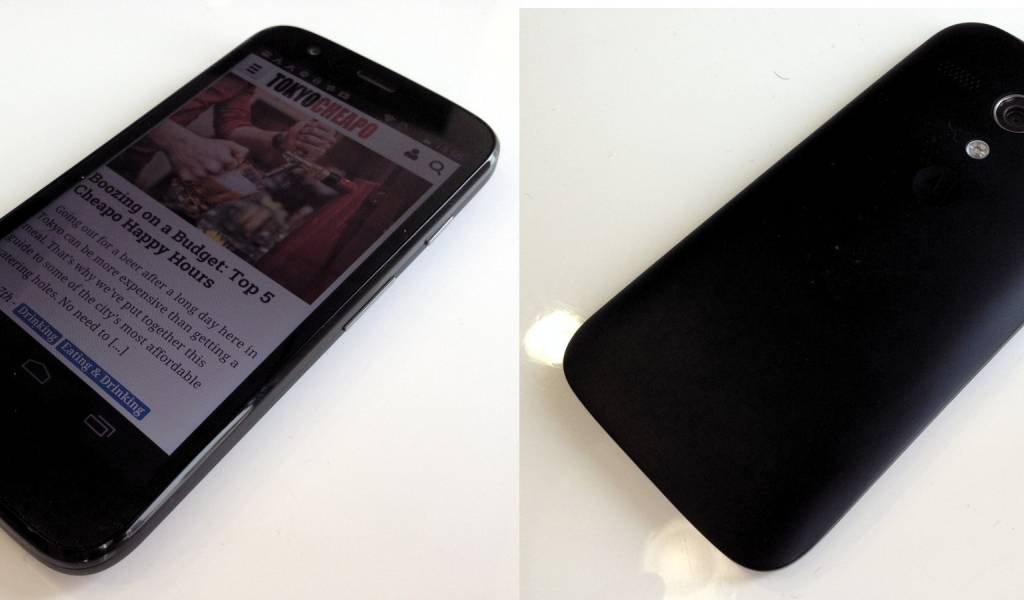 Released by (at the time) Google owned Motorola, this phone was a milestone in the smart phone market – a medium spec phone for a reasonable price. The US list price was just $US179 for the 8GB model – putting the Moto-G right in the path of the no brand piece of crap phones. Yet to be officially released in Japan, the phone has proved very popular wherever it has been released. When it was released in India at the start of February, the 16GB model sold out within 15 minutes.

So how does it stack up?

For a phone with a 4.5″ screen it doesn’t feel that big – for one handed operation there was no difficulty getting my thumb to all parts of the screen. The weight (slightly more than some of the higher end handsets) wasn’t a problem and the rounded back make it easy to hold. It’s designed so that you can clip on Nokia-like colourful covers on to the back – which is probably a good idea as the default black cover that it comes with is highly susceptible to fingerprint marks.

The quad-core snapdragon CPU makes the interface very smooth and snappy. This alone sets the phone apart from anything else at this price point. Typically other phones around this price are dual core or even single core.

One notable omission for Android aficionados is the lack of a Micro SD card slot for additional storage – so if you decide to go for 8GB version you will need to be storing a lot of your photos and or music in the cloud because there’s no where to go once you’ve filled it up. Luckily, it does come with 50GB Google Drive storage, so if you want to go that path, you won’t quickly run out of space.

Another important thing to note is that the phone is not LTE compatible with the fastest download speeds being over HSPA+.  With a B-Mobile “4G” data SIM, the speed wasn’t amazing at 3Mbps, but wasn’t a problem for regular web and app use.

The Moto G has a more than decent 2070 mAh battery. The reported standby time is 54 hours – which I can attest to as on a single charge I was hearing notifications for three consecutive days.  The manufacturer also claims 24 hours talk time so two days of regular use between charges should be possible.

The Gorilla Glass screen is big with plenty of brightness. After browsing some sites on the 720 x 1280 HD display, my iPhone 4s display felt tiny.

The camera is another reason the Moto G is as cheap as it is. Compared to top of the range phones like the Xperia Z1 and the Galaxy S4 with high quality 20 megapixel and 13 megapixel sensors respectively the picture quality is quite a bit poorer. Compare the same scene taken below with my 2 1/2 year old 8 megapixel iPhone 4s.

With headphones, the phone does more than fine with music and podcasts. The internal speaker, positioned on the back of the phone is loud enough to hear from a radius of a few metres, but the sound quality is quite tinny.

At the time of writing, our partner site Expansys Japan had the listed at 23,468yen and the 16GB model at 28,690yen. Although imported directly from Hong Kong, Expansys includes a Japanese adapter for the charger.

Alternatively, you can order it directly from the US, but you’ll be on your own if you have any issues.