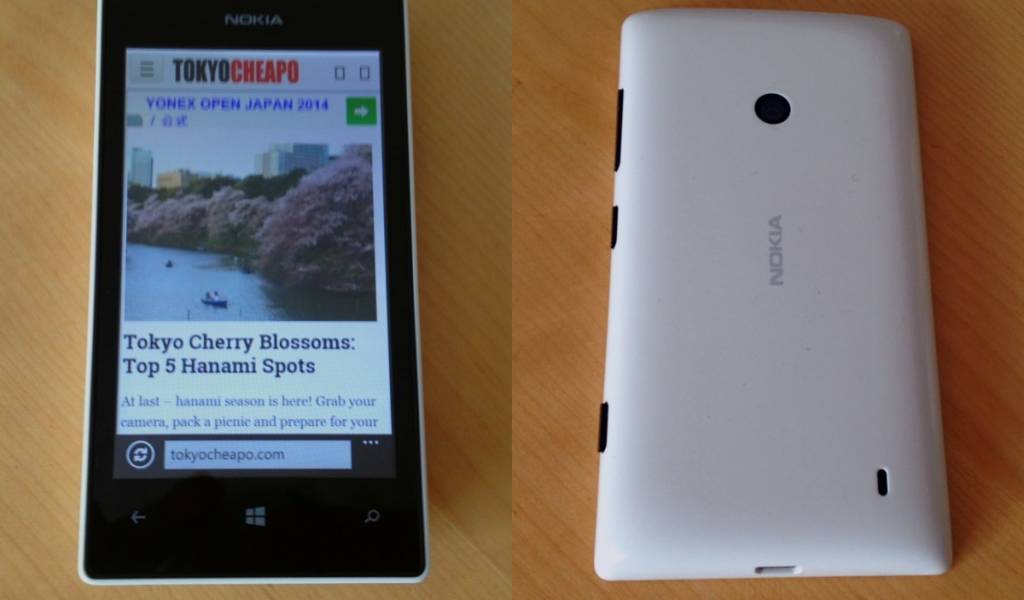 Let’s not be all fanboi, whether it’s iOS, Android, Firefox OS or Windows Phone, phones are becoming more and more a commodity. There are a few apps that aren’t available for the others but in general there are only a few things that separate the different handsets – speed, quality of the screen, the camera and integrated services. Nokia is famed for its cameras. My phone before I jumped on the Apple bandwagon with a 3GS was a Nokia N73 with a Carl Zeiss lens. However, that phone was proof that a good camera is more than megapixels and brand name lenses – the sensor was terrible in low light and didn’t stack up at all well next to Japanese feature phones of the time. This camera on this phone however, is only 5 megapixels but it has a much better sensor than that would suggest.

The build quality does feel slightly cheap but on the flip side, the plastic construction makes it light weight. The 4 inch screen is touted as ‘scratch resistant’ glass but I did notice more finger mark buildup than you’d get from a phone with gorilla glass. The screen size is small compared to a lot of other phones, but as big as the iPhone 5/5s. Compared to the iPhone 5/5s it’s a little wider due to the bezel, but it still has a compact feel.

The internal speaker is surprisingly loud but not surprisingly tinny – not suitable for listening to music without headphones. Through headphones, the sound has decent bass, but the treble sounds slightly muddy.

As you can see from the picture above, there is not much between the iPhone 4S and the Lumia 525, although I’d give it to the Nokia for the slightly better clarity and slightly more vivid colour reproduction from the 1/4 inch sensor. One huge minus is that it doesn’t have a flash. Also, there is no front facing camera if you’d like to Skype your parents.

Battery is outstanding with a claimed 336 hours standby and 17 hours talk time. After a single charge I returned it to the box. When I took it out again 1 week later it still had half the charge remaining.

App selection is OK – Microsoft has produced versions of all the popular services such as Facebook and Youtube.  Some of these apps were probably based around the web services so they were slightly laggy.  People with a social life in Japan will be happy to know that there is a Line app available.

The standard mapping with Nokia handsets is “Here Maps” – which is absolute rubbish. About all Here Maps can tell you is that yes, you are in Tokyo. There is an unofficial Google Maps app though – and you can use the web based version of Google Maps. Needless to say the HERE Drive turn by turn navigation is also useless. Starting the app results in a “Navigation isn’t available in your country” message – here Maps only shows about 3 roads for Tokyo so this is a good thing. Likewise, the “Local Scout” feature seems to rely on Here Maps so was also unusable.

One of the much touted benefits of Windows Phone is Xbox integration – probably not a big selling point in Japan where the Xbox has never caught on. After tapping on the Xbox tile, a default user name is provided and it’s authenticated to the phone so you don’t need a password. Popular (although ancient looking) games like Final Fantasy and Sonic the Hedgehog have “try” options so you can play them without entering your credit card. The selection definitely tends towards arcade rather than mobile.

Nokia Beamer is an interesting although perhaps useless feature. Start Nokia Beamer on your phone, go to beamer.nokia.com and then scan a QR Code. After this, every time you shake your phone, what’s on your phone’s screen is shown on the larger computer screen. Not as smooth as casting in Android or iOS but very simple.

One good feature for Cheapos and travellers alike is the data traffic monitoring “Data sense” feature. If you’re on a B-mobile pre-paid SIM, you can enter the days remaining and the amount of data you have and you’ll get alerts on data usage.

Other tiles include a “People” tile which integrates social media feeds into one place. There is also an Office app which allows you to view and edit office docs – although this screen size isn’t the best for editing.

The Lumia 525 can be used on Docomo’s network via B-Mobile.  Inserting the SIM was relatively easy, although removing it again was a little more work.

To the left is a screenshot of the performance from speedtest.net with a B-mobile “4G” SIM (not really 4G since it’s not LTE compatible).  This isn’t a reflection on the phone, this is quite standard for this SIM.

Activating the SIM was reasonably straight forward – just add an Access Point under settings and enter the B-Mobile information that you received with the SIM.

A decent phone for the price and the Windows Phone OS isn’t as much a shock to the system as you might expect coming from iOS or Android.