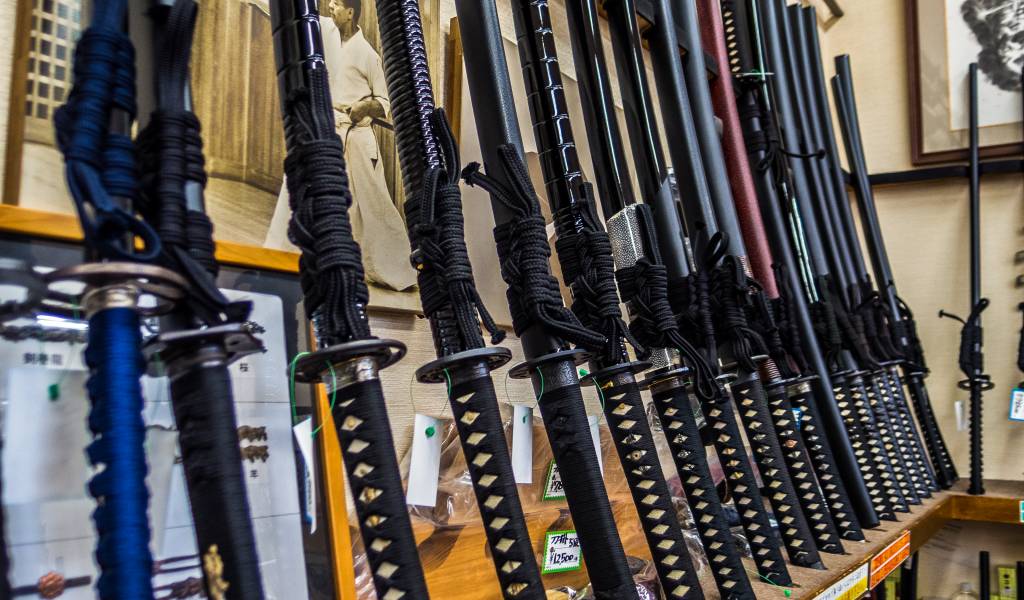 Japan is Martial Arts Central of the World™, so if Tokyo is Japan Central, it would make sense that it should be the Mecca of everything martial arts related right?

Weeeeell, actually no. Strange as it might seem (and it does to most martial artists who visit), for anyone over college age the martial arts are just a fringe hobby and the availability of stores catering to it reflects this fact. No matter how hard you look, you won’t find anywhere in Tokyo that is the martial arts equivalent of Akihabara (for electronics and manga/anime culture), Jimbocho (for books) Ochanomizu (for musical instruments) or Ogawacho (for sports); the closest you’ll get is Suidobashi with, count them, five shops. And that’s it!

Besides lack of popularity (at least compared to what has been advertised in the West), there is another problem with martial arts’ equipment: its diversity. “Martial arts” is as generic a term as is “track and field”, so it would be hard to have stores offering equipment for all of them, especially considering the numbers of practitioners between arts vary and so do needs for equipment. A judo or jujutsu practitioner basically needs a keikogi (training uniform) and a belt, whereas a kendo (Japanese fencing) practitioner needs a hakama (pleated trousers), uwagi (jacket), bogu (armor), shinai (bamboo sword), long and short bokuto (wooden sword) and a couple of dozens of spare parts for the bogu. Opening a store stocking all these would be a considerable investment which wouldn’t make much financial sense for something that isn’t as well spread as, say, baseball.

Still, budogu (martial arts equipment) shops do exist and depending on your needs you will need to find the one that suits you. Those included in this article are the ones I and other martial artists I’m acquainted with know and often purchase equipment from. If your specific needs aren’t covered, the best way to research would be asking the people you train with (assuming you actually want to train while in Tokyo). More often than not, dojo/schools/martial arts organizations have shops or companies they are associated with, so they will be able to point you to the right direction. This is especially true if you’re training in some classical school (koryu) which has very few practitioners and very specific needs for weapons. The school where I train, for example, needs particularly long and heavy naginata (halberds) that are order-made for us by a workshop in Kyushu, delivered to our dojo by courier and are paid by bank transfer. There is no shop, no website, not even email—everything is done by fax. (Yes, Japan can be very low-tech at times…)

As mentioned earlier, the place to start is Suidobashi, the area close to the Tokyo Dome stadium and served by either Suidobashi Station (on JR’s Chuo-Sobu Line or Toei’s Mita Line) or Kasuga Station (on Toei’s Oedo Line). Once there, try first going to the Kodokan, the hub of Japanese (and world) judo and founded by the art’s/sport’s founder, Jigoro Kano. Besides its central dojo being open to visitors, you will also be able to shop for judo-related memorabilia and equipment at the shop right as you enter. Don’t let its size fool you: it has more than what you see so if there’s something you’re interested in, ask! (They are used to dealing with non-Japanese.)

When you finish with the Kodokan, cross the street, walk for a couple of blocks to the right and you will find what I (and many others like me) consider to be the best kendo, iaido, jodo and koryu equipment shop in Tokyo: Shobudo Sangyo. The amount of sword-related stuff in this smallish shop is amazing and the people will answer happily to any inquiries regarding sizes, customization and pretty much anything else. If you are into weapon-based arts and you only have time for one shop, this should probably be it—actually this should definitely be it.

3. Suidobashi Shokai — A little bit of everything

Having feasted on swords and kendo armor, you can exit Shobudo, walk less than a block and come across what is probably the best-known martial arts shop in Tokyo: the (also small) corner store called Suidobashi Shokai. Here the emphasis is on, well, everything—judo, aikido, karate and kendo equipment as well as tenugui (hand towels) with inspiring mottoes have been brought together for your shopping pleasure in an atmosphere that echoes the 1960s-1970s, when martial arts became one of Japan’s best-known exports.

And if you want to stay in the mood, leave Suidobashi Shokai, turn the corner, go up a block, turn again and across the street from a shrine you will find the main shop for what is perhaps karate’s most famous equipment maker: Tokaido. It’s pretty nondescript so look carefully, but you will be rewarded with anything karate-related (old school and competition).

The above are four of the five Suidobashi shops. For the fifth you’ll need walk a little more along the river and after JR’s Suidobashi Station (see the map below), but if you are into MMA, this is the absolute place to be. The name is Suidobashi Isami, it’s on the second floor and it has everything you will need if you are into free-for-all, no-holds-barred, cage fights. And no, the staff are not at all intimidating and very polite.

Leaving Suidobashi you’re pretty much over. Of course there are several other shops scattered around Tokyo but not in a cluster so you’ll have to go to each one separately.

For example, there is:

As I wrote before, ask your teacher or dojo-mates—they know what’s best for you and your art!

In the title there is a mention about swords –because, you know, Japan, samurai, etc. Truth be told, swords are a tricky subject because any way you, ahem, cut it, real swords are too expensive to be included in a TC article. And besides, they are an enormous pain in the thing since they must be registered and you need tons of paperwork to take them out of Japan. So is there a way to quench your thirst for things samurai without (a) breaking the bank and (b) getting to know Japanese bureaucracy?

Actually there is—and this is a tip you won’t find elsewhere! You see there is this martial art called “iaido” which basically consists of solo forms of sword-drawing, cutting the air and returning the sword to its scabbard. Iaido practitioners from a certain level up use real swords (aka “shinken”)—the ones that cost a fortune and whose cutting ability would put to shame most razors—but until that level, they are allowed to use very realistic replicas called “iaito” (note the difference: “iaido” is the art and “iaito” is the weapon).

Now, these iaito are not wall-hangers! They are made by craftsmen who also work on real swords and their koshirae (fittings) are the exact same you would find on a $10,000 piece made by any of Japan’s 200 registered swordsmiths. The difference is in the blade: iaito blades are made of a zinc-aluminum alloy that weighs like the real thing and even looks like the real thing but isn’t sharp and can’t be sharpened – the blade will be destroyed. (They are extremely pointy though so be careful for stab injuries!)

Their price range is from $300-$1,000 (the more expensive ones have silver or gold fittings) and they can be purchased in:

The way I see it is this: if you’re only interested in something you’ll put on a stand and enjoy looking at, an iaito is much better than a “kazarito”, i.e. a purely decorative sword—these are usually too flashy (think “Highlander”) and very poorly constructed and they will probably set you back a similar amount of money. But if at some point you decide to take up iaido you will already have the basic equipment, plus you will have an (almost) real sword, made by people who actually make swords and cater to people who actually use them. Plus, you won’t have any trouble taking it out of Japan: the customs’ officers will test it with a magnet, see it’s not steel and let you check it in with the rest of your luggage. What I can’t say for sure is if you’ll have any trouble passing customs at your destination, but since this is technically a “fake” chances are you will be able to pass without much fuss—just tell them it’s a decorative souvenir.

Asakusa Kudanshita Ochanomizu Suidobashi
Written by: Grigoris Miliaresis
Filed under: Shopping
Tags:
Sharing
Questions or comments about this article?
Start a thread on our community forum
Ask our local experts about Tokyo