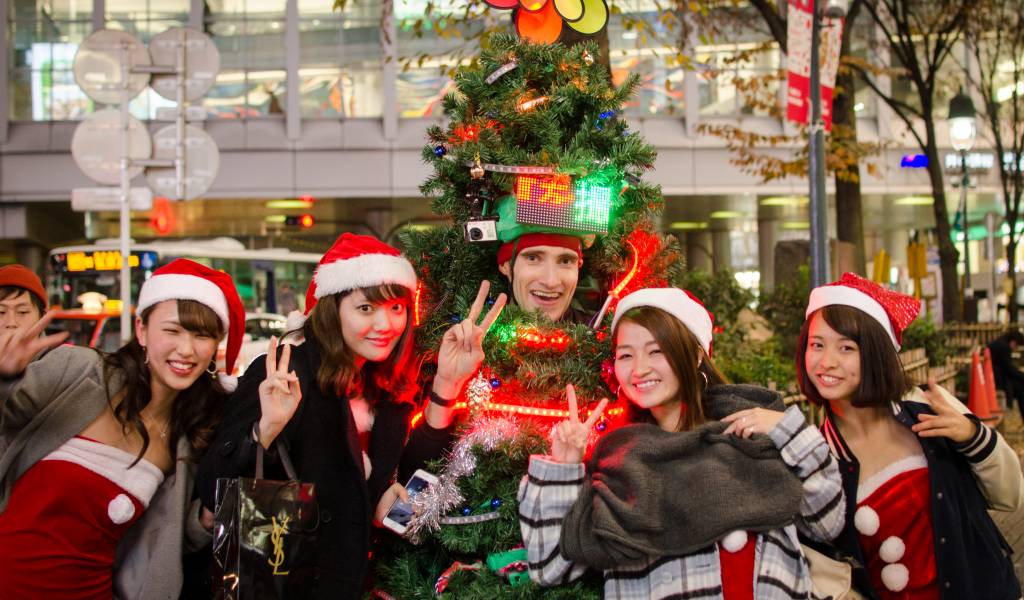 Festive Cheer On Demand: The Running Christmas Tree in Tokyo

Have you noticed how complicated Christmas has become lately? The constant complaints of hyper-consumerism, the outcry against offensive and derogatory Christmas cards (and rightfully so), and the grumbles over “Happy Holidays” versus “Merry Christmas” (although, have you ever actually met someone who had an issue with the latter—actually being the operative word).

No doubt you’ve come across at least one of the above bummers in recent weeks—which would have anyone’s fun-o-meter dipping low—so you’ll be happy to know that there’s one man bringing Christmas back to its joyful basics. Joseph Tame, a festive soul who has assumed the identity of a Christmas tree, is literally and figuratively lighting up Tokyo.

This homemade, wearable Christmas tree was created by Tame as a way to “bring Christmas happiness to areas where traditional lighting does not reach.” Simply put, he wants to spread the cheer, and the response has been as feel good as expected—see for yourself:

The tree comes complete with 1500 LEDs, three cameras and a 153-Christmas-song library.

Like what you see? You can request the tree, and consequently Tame, on demand through an app being released on Dec 26, 2015, much like you would an Uber car. Tame/the tree can dance, tell jokes, flash lights and play songs, all festively themed, and comes at a cost of 50,000 yen/$500USD for worldwide service (provided  you also pay for transportation from central Tokyo). Although if you’re reading this, you’re probably way too cheapo to dish out that kinda dough, however you can still feel like you’re part of this Christmas story by donating batteries to keep Tame and his good thing going.