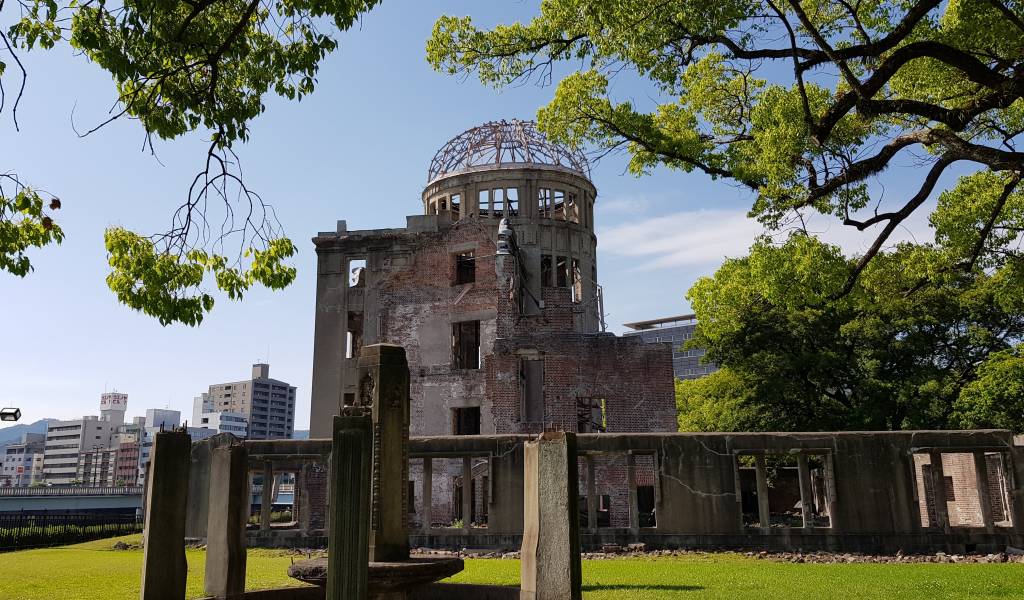 Tokyo to Hiroshima: Five Ways to Get There

Hiroshima, capital of the Hiroshima prefecture (pretty obvious), and its surroundings have a lot to offer: the Shukkeien garden, the Hiroshima Castle, the Peace Park, Miyajima‘s famous floating torii and Okunoshima (‘Bunny Island’) are just some of the must-visits in Japan’s far west. Here’s the problem for cheapos, though: it’s far, and far means expensive. But that won’t kill our travel buzz, so let’s look at our Tokyo to Hiroshima travel options.

Surprisingly, the fastest way to get to Hiroshima is reasonably priced as well. Flights can be had for as little as ¥5,868. Flight compare sites like Skyscanner often have the best deals:

Note: it costs an additional ¥1,300 to get from the airport to the Hiroshima city center by bus.

Traveling via bullet train is of course really fancy, and it’s an experience that anyone should try before leaving Japan. But not to go to Hiroshima. The Tokaido-Sanyo Shinkansen is certainly convenient: only slightly longer than traveling by plane, and without the headache of getting to and from the airport and going through the check-in/baggage process. The issue is that it’s quite a bit more expensive: about ¥18,000 one-way (and no, you can’t get a deal comparable to what airlines offer).

If your heart is set on taking the bullet train there, consider the ¥29,650 JR Pass that provides unlimited travel for 7-days, even on some shinkansen, making your journey to Hiroshima a much better deal if you’re planning one or more additional trips around Japan. If, for whatever reason, you’re not getting the JR Pass, you can easily book your Hiroshima shinkansen tickets in advance.

If you are reading Tokyo Cheapo, you probably already know about the Seishun 18 Ticket: five days of unlimited usage of local trains for ¥12,050, and if you split the 5 non-consecutive days of travel between five friends you can actually get to Hiroshima for less than ¥2,410. However, get ready for a tough day.

You will have to change about 5-6 trains (depending on where exactly in Hiroshima you plan to go), and travel for about 15 hours overall: meaning you shouldn’t leave Tokyo too late in the day, otherwise you’ll be stuck in the middle of Japan for the night waiting for the train service to start up again. Overall it’s quite inconvenient, but it’s going to save you some good money. Use Hyperdia to plan your travels for this journey.

Taking the bus is a tried and true cheapo travel hack to save some cash, and it’s no different for getting to Hiroshima. We recommend checking out Willer Express, who offer bargain bus + hotel packages, as well as one-way tickets.

For a destination this far away from Tokyo, though, there is a downside: 13+ hours seated in a closed space among strangers. If you take the night bus and have a knack for falling asleep almost anywhere, it might not be so bad though!

It’s very hard to estimate the price of getting to Hiroshima by car, since it depends on many factors: which car you have (or rent), which route you take, how fast you drive, and so on. With the reasonable prices of gasoline in Japan, if you manage to share a minivan with friends it’s likely to be much cheaper than flying—although tolls are quite expensive, so options like the Seishun 18 ticket is still cheaper than driving.

Since it takes about 10 hours from Tokyo, we don’t recommend driving if you are just going to Hiroshima, however it’s a great travel option if you’re planning a road trip with multiple destinations along the way. Car share options in Japan include: Orix, Careco and Times Car Plus.

I’m sure you have already seen it in books, documentaries and travel guides. So why not check it out for yourself? The Miyajima Torii is just a 45-minute journey from Hiroshima. You can catch either the JR Sanyo line to Miyajimaguchi (25 minutes, ¥420 and JR pass covered) or the slower tram which is ¥280. Then, you hop on a ferry, either run by JR (which is also covered on the JR pass!) or Matsudai, (which is not)—both cost ¥180 one way. As you can see from the picture, when the sun goes down the view is pretty breathtaking.

Could you imagine something more awesome than an island abandoned by humans and inhabited almost only by bunnies? Well, apparently it’s not just the stuff fairy tales are made of—it really exists and its close to Hiroshima. Get to Tadano-Umi Station by train on the JR Sanyo and Kure Line (¥1,520), and then catch the ferry (¥500 one-way) to the Okunoshima Island. Just get some cabbage and sit down anywhere on the island, you will have at least 10 bunnies jumping on you in no time.

Written by: Giulio Coral
Filed under: Getting around | Transport
Tags:
Sharing
Questions or comments about this article?
Start a thread on our community forum
Ask our local experts about Tokyo